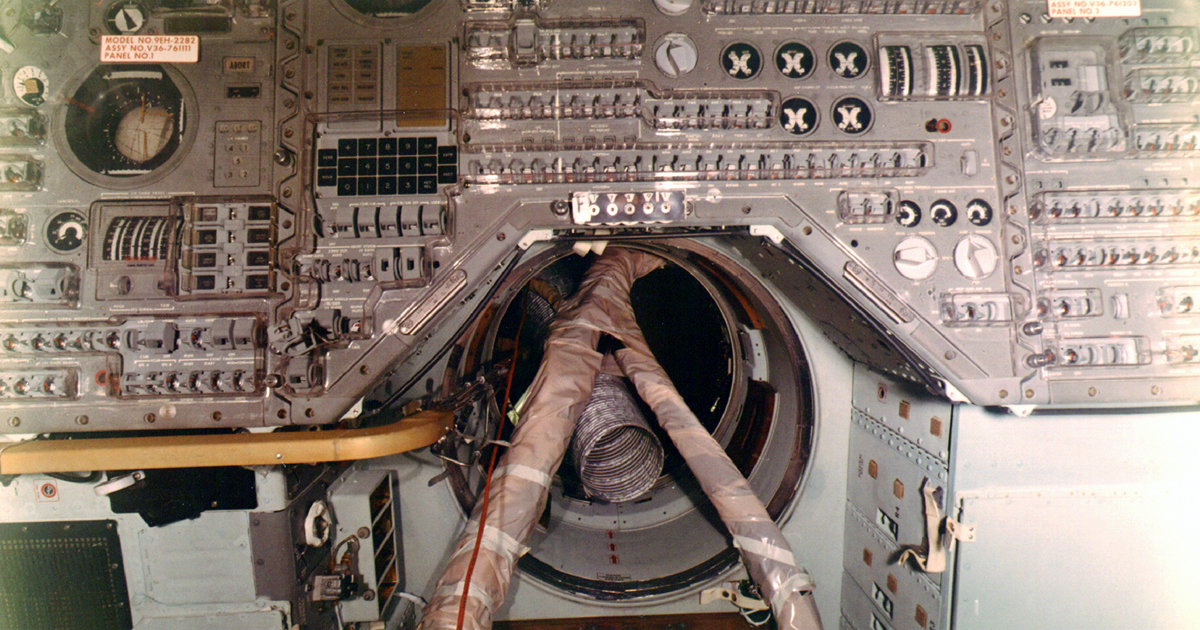 The Computer That Took Man To The Moon

Even though the last Saturn V flew decades ago, the Apollo moon landings remain one of mankind’s greatest engineering efforts. What makes them even more impressive was the era in which they were designed. 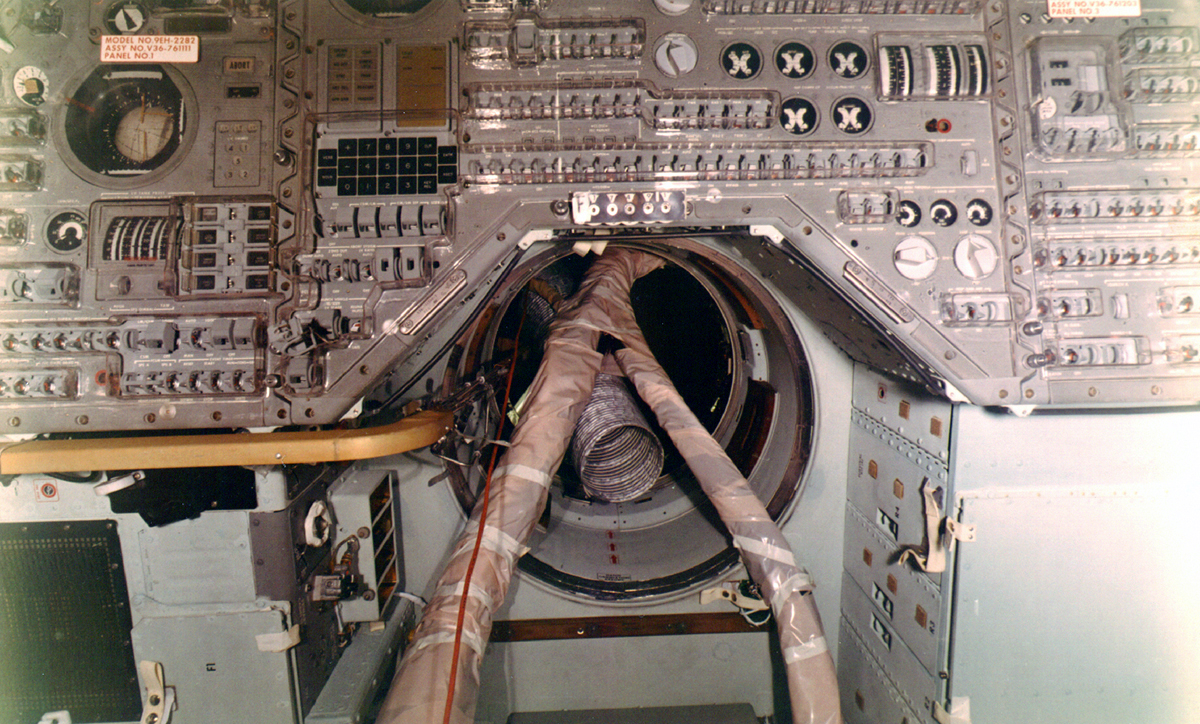 Inside the apollo capsule. The Apollo Guidance Computer is located to the upper left of the crawlway tunnel.

During the 1960s, computers occupied whole rooms, but had less power than the PC now sitting in the den of your home. There weren’t even pocket calculators back then. And yet, on September 12, 1962, in front of a packed crowd in Rice University’s football stadium, President Kennedy was willing to propose the building of “a giant rocket more than 300 feet tall, the length of this football field, made of new metal alloys, some of which have not yet been invented, capable of standing heat and stresses several times more than have ever been experienced, fitted together with a precision better than the finest watch.”

At the top of the Saturn was the Apollo spacecraft. And one of the most important components inside of the Saturn was its guidance computer. As Charles Murray and Catherine Bly Cox noted in their seminal classic Apollo: The Race to the Moon (Simon & Schuster, 1989), “The computer capacity of the mainframes in the Control Center [of NASA’s Manned Spacecraft Center in Houston] was smaller than that of the desktop systems of the 1980s, and onboard computers in the command and lunar modules had less capacity than some pocket calculators.”

“Overflow the boxes” was NASA-speak for putting in more requirements than computer memory and computing capacity could handle. That wasn’t very difficult with the Apollo Guidance Computer (AGC), which in retrospect looks pitiful in comparison to today’s Windows equipped PCs with their GHz of memory, 3 GHz processors, and massive hard drives. 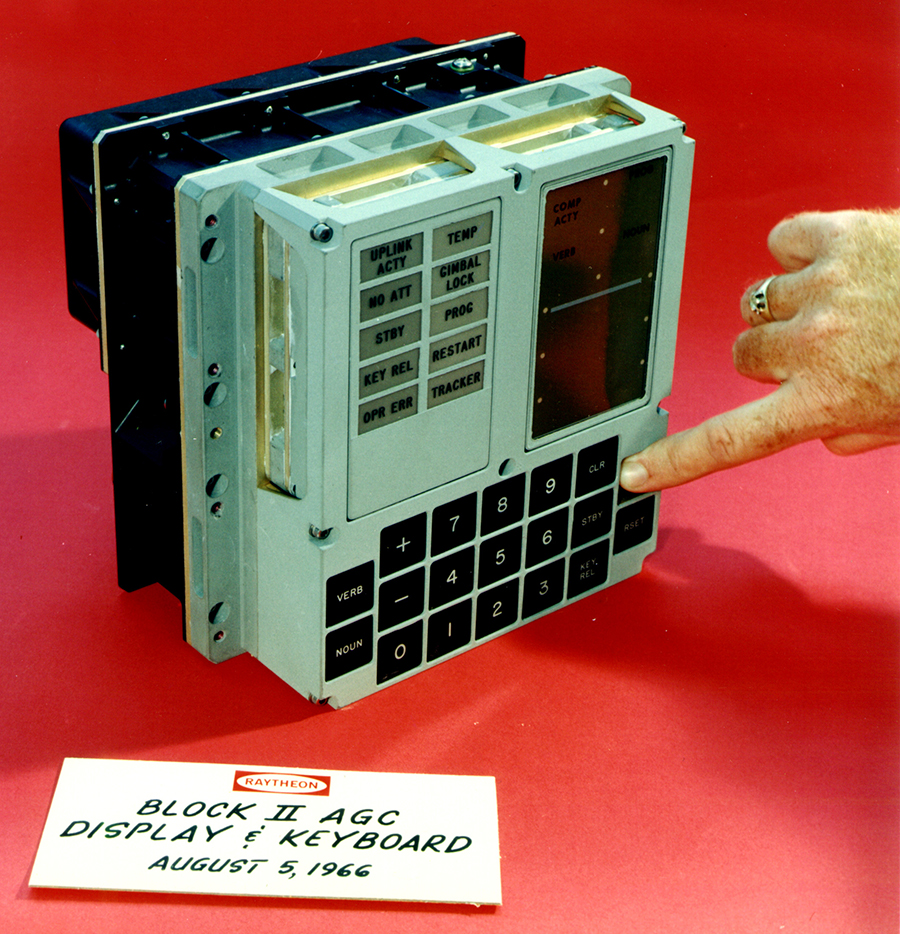 The "Block 2" version of the Apollo Guidance Computer, designed in 1966, increased erasable memory from 1K to 2K words. Fixed memory was expanded from 24K to 36K.

In contrast, the Apollo Guidance Computer, which weighed 70 pounds, had only 36K of RAM and 2K of ROM. But it was able to guide 27 men to the moon’s orbit and bring them back safely. It consisted of two parts: a small keyboard for the astronauts inside the command and lunar modules, and a separate, slightly larger logic unit. 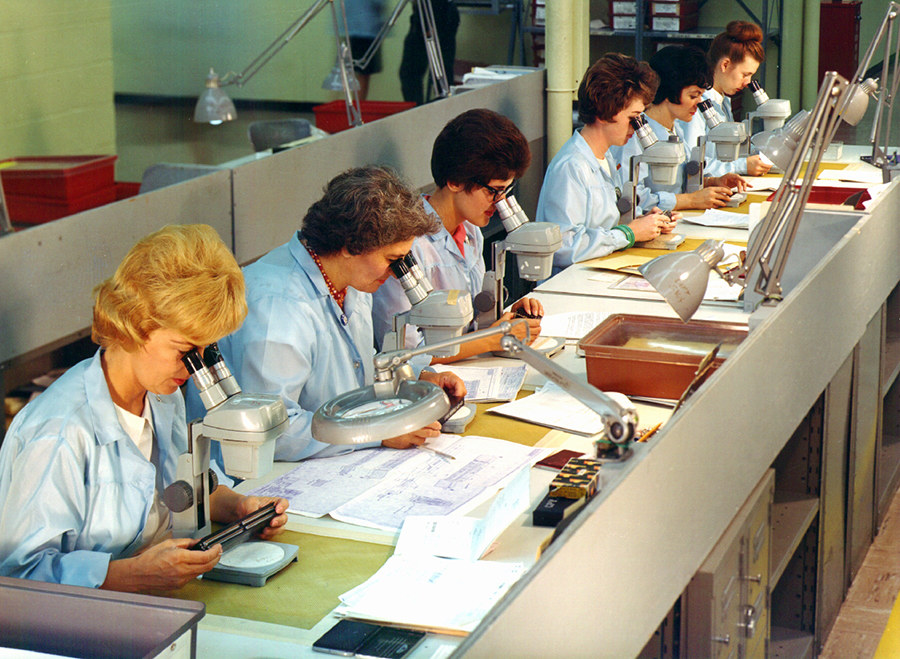 The AGC was built by Raytheon and used approximately 4,000 discrete integrated circuits from Fairchild Semiconductor. (There were also two other onboard computers on a moon mission — a flight computer onboard the Saturn V booster rocket, and a separate backup computer on the lunar module that could be used in an emergency for a liftoff from the moon should the AGC fail.)

The limitations of the Apollo Guidance Computer resulted in some classic push-pull arguments from Apollo’s flight controllers and engineers trying to fit routines too complex into the limited capacity of these computers. Murray and Cox quote Cliff Charlesworth, one of Apollo’s flight directors, as saying, “Every time we’d get a new capability in the computer systems, the flight controllers would start laying their requirements on it. In short order, we’d overflow the boxes. And [Chris] Kraft [NASA’s legendary first flight director] would get mad. He’d say, ‘Goddammit, get it back to where it’ll fit, we can’t get any more computers!’”

Built Under an Intense Deadline

Like all aspects of the Apollo program, the computers were created under intense pressure: Kennedy’s “We choose to go to the moon in this decade” speech in 1962 gave the program a firm deadline, and the memories of his assassination a year later only increased the weight of his words. In contrast to later decades, the NASA of the 1960s was that rare government program with both a purpose and a deadline, as well as a burning collective desire to get the job done. 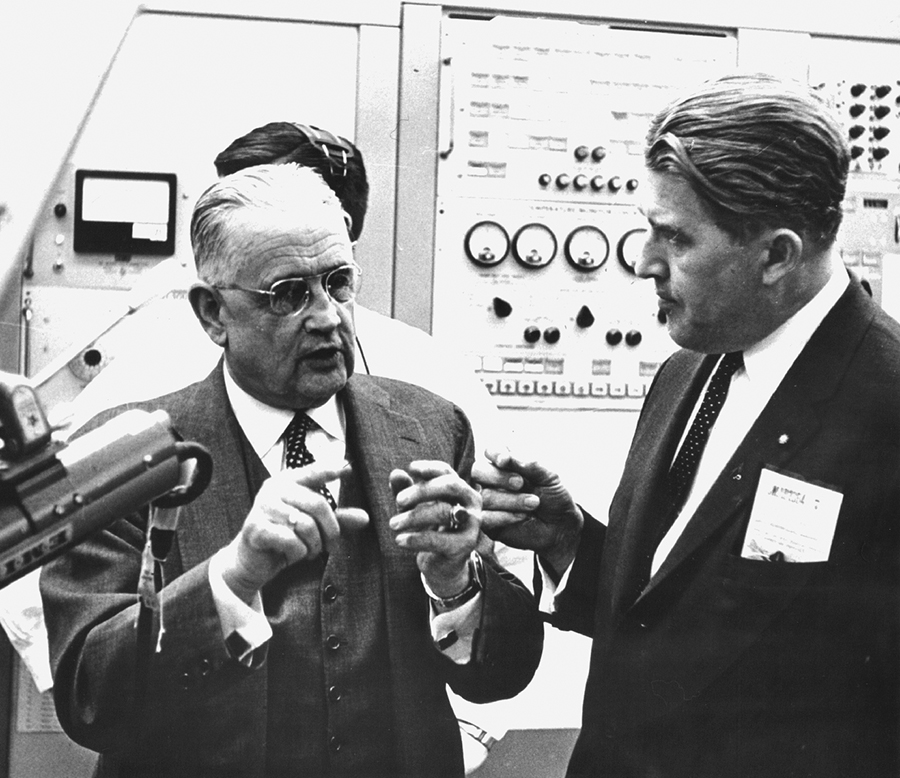 In 1961, during the very early stages of the design of Apollo and its Saturn booster, NASA contacted MIT to study the feasibility of a digital control system for Apollo. According to, Dag Spicer, the senior curator of Silicon Valley’s Computer History Museum (www.computerhistory.org), the driving force behind the design of the Apollo Guidance Computer was a cyberneticist at MIT named Charles Stark Draper, for whom the university named a laboratory devoted to studying and measuring motion.

Draper and the men under him cut their teeth working on the Poseidon and Polaris guided missiles. “His expertise was basically how to point missiles and make them go where you wanted them to go” Spicer says, adding, “It was very Cold War research-related: how do you make guidance systems that allow bombs to get as close to their targets as possible.” This makes sense because, as Spicer notes, “You know, a rocket is just a missile with a person on top; it’s basically all the same technology.” (In the early 1970s, MIT succumbed to the anti-war protestors of the time and spun the Draper Lab off as a separate non-profit entity.) 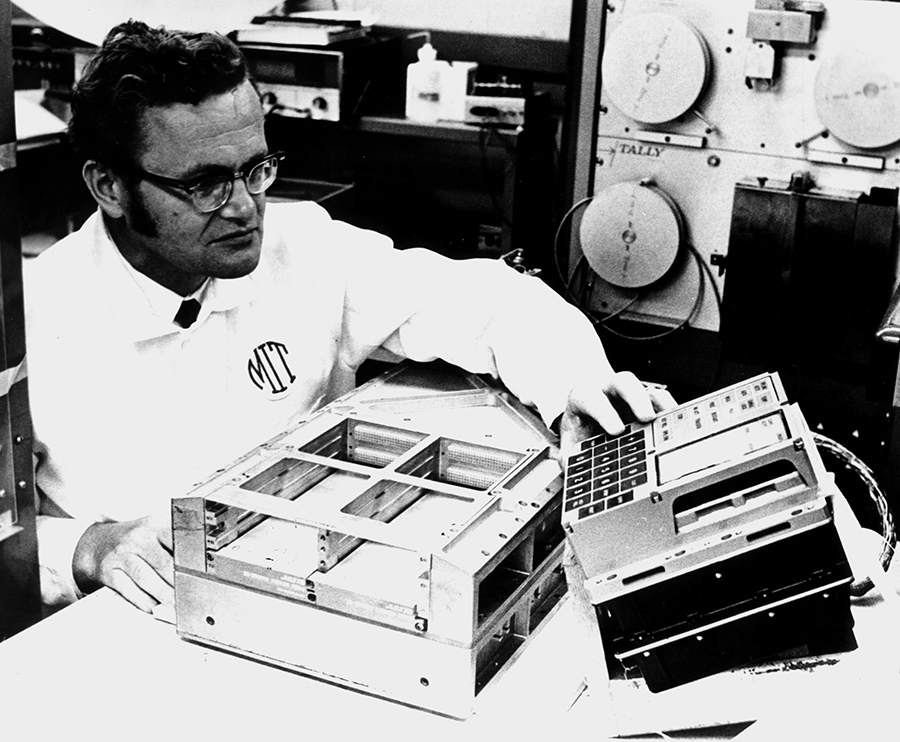 Eldon Hall, who taught at MIT until 1988, designed much of the hardware for the Apollo Guidance Computer, helping to pioneer the use of integrated circuits in its design.

The Gemini program, which directly preceded Apollo, involved the first American manned attempts at finding a fixed target in space and navigating towards it. To say that these first efforts were challenging is an understatement. The great untold story of Gemini is one of how many things went wrong, but were salvaged in real time, during this thoroughly experimental phase of the space program.

In addition, the complexity of finding, orbiting, and returning from a celestial body that orbits over 200,000 miles from planet Earth added a whole new set of difficulties to space navigation. The Apollo program is not only a tribute to the astronauts who actually flew the missions, but also to the engineers and flight controllers who designed their hardware and guided them to their target and then back home.

By 1969, Less Powerful than Business Computers

As trade publications observed at the time of Neil Armstrong and Buzz Aldrin’s 1969 landing on the moon, Apollo’s guidance computer was even less powerful than computers commercially available at the time, such as DEC’s PDP-11. Ironically, this phenomenon is a frequent byproduct of long-term, government-funded projects. Spicer says, “By the time that you’ve nailed down the project definition and the various technical requirements, and you’ve decided on an implementation technology, that technology has already changed! By the time that you’ve actually finished the project, the hardware is usually very outdated.”

Spicer notes that outdated computing hardware is, perhaps somewhat paradoxically, “a feature of space programs,” adding, “These billion-dollar satellites and spacecraft end up going into space with computational power that’s the equivalent of a Commodore 64 or something along those lines. Very small memories, eight-bit processors, very few if any rotating or moving parts. That’s one of the lessons of Apollo — to throw out as many parts as you can to keep them out there. The chips were so expensive as well, which was also a great motivator to cut out parts.” Spicer is fond of Gordon Bell’s quote, which is directly applicable to the Apollo Guidance Computer: “The most reliable components are the ones you leave out.”

Reliable is a good word for the AGC. In 2001, Spicer wrote a superb article on the guidance computer for Doctor Dobbs’ Journal, in which he noted that the guidance computer in the Apollo 11 LEM recovered from a data overload during its lunar descent, and operated just fine on Apollo 12, despite the fact that its Saturn V launch vehicle was struck by lightning 36 seconds into its ascent. “As every module in the AGC was ‘potted,’” Spicer wrote, “that is, dipped in a waterproof epoxy compound to protect it in space, there was great pressure on the software team to be especially dedicated to error-free development.”

Of course, one reason why commercially available computers of the late 1960s were as powerful as they were — a phenomenon that would continue to grow exponentially — was the space program itself. In his article, Spicer wrote, “It’s a frequently cited truth that the space program resulted in the accelerated development of integrated circuitry.”

NOTE - All photos are courtesy of the Computer History Museum.

The Computer History Museum is located at: