Twenty plus years ago, I published an article in Nuts & Volts about designing a general-purpose programming system. Back then, I had collected over a dozen programmers for use with different chips. I thought about purchasing an expensive “universal” programmer but ultimately decided to design my own: the LP120. The LP120 provided the basics needed in any programmer while the programming module (that plugs into an edge connector) provides additional circuitry that may be unique to the particular chip being programmed.

I’ve used the LP120 heavily for the last 20 years to support my eight-bit design hobby. It now has uploadable drivers and programming modules for many eight-bit micros (Motorola and PIC), EPROMs, and GALs. However, things have changed since 2000. Back then, few microcontrollers had more than 4K bytes of program memory and now eight-bit PICs have up to 64K of memory.

Clearly an update to the LP120 was called for.

Of course, I wanted to make the transition to my new LP130 as easy as possible, not only for myself, but for the several Nuts & Volts readers who I know built LP120s. When I decided to update the LP120 and create the LP130, I set several goals for the LP130:

I was able to achieve all the design goals:

Figure 1 shows the block diagram of the LP130 programming system.

To fully comply with published programming algorithms, the supply voltage to the part being programmed also needs to vary. For example, some 5V EPROMs are programmed while powered at 6.5V, and PIC microcontrollers are verified at the min and max supply voltages. Typically, the tolerance on supply voltages is ±0.1V. Therefore, the programmer should be able to power the device being programmed with voltages from 3 to 6.5 volts with better than 0.1V accuracy. I use the symbol Vps for this voltage because it’s the voltage supplied to the programming socket.

Including address, data, and control lines, an EPROM may need 26 digital interface lines for proper programming. Therefore, the programmer should provide at least 26 bi-directional digital lines to interface with the device being programmed. 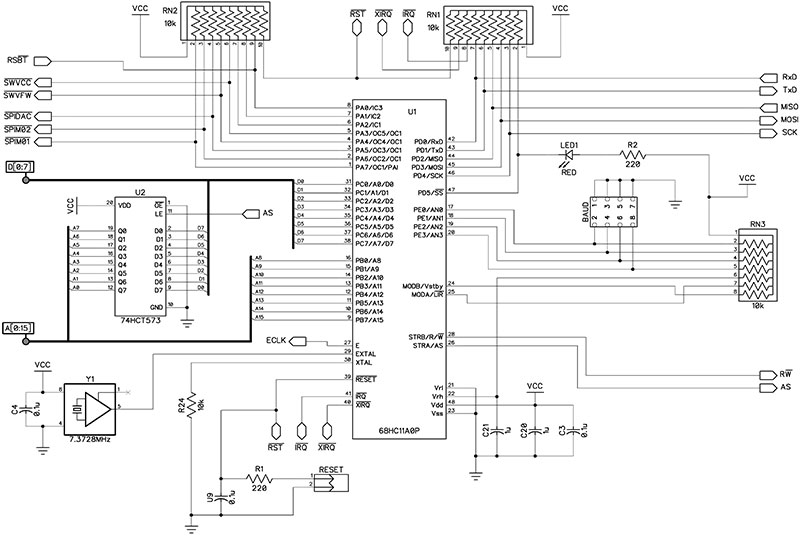 The E-clock output of the 68HC11 (pin 27) is a square wave at one-fourth the crystal frequency or 1.8432 MHz. Figure 1 also shows the pin selectable BAUD rate header and the RESET header.

Figure 3 shows the parallel memory in the 68HC11’s memory space. 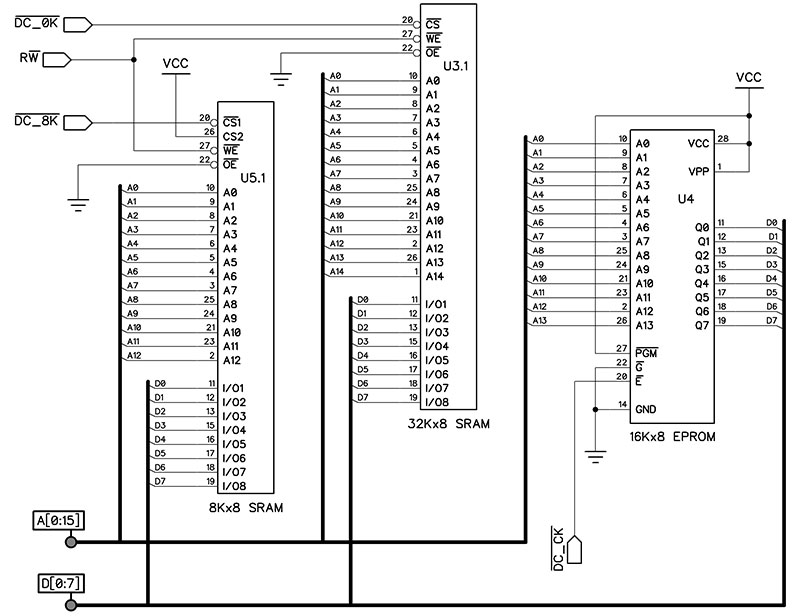 The firmware doesn’t have the code to program all the devices the LP120 is capable of programming; it only contains the operating system, test routines, and hooks to lots of subroutines.

To program a specific device, “driver” software must be uploaded to the LP130 and executed out of RAM. In the last 20 years, the footprint of RAM chips has changed so the LP130 circuit board was laid out to accept either 300 or 600 mil wide DIP packages for the 62256 and 6264 chips.

Figure 4 shows the SPI peripherals connected to the 68HC11. U10 and U11 are both 23LC1024, 128K x 8 serial RAM chips. The MCP4802 (U12) is a dual eight-bit voltage output SPI/digital-to-analog converter (DAC). This dual DAC provides the reference voltages for the Vpp and Vps power supplies. 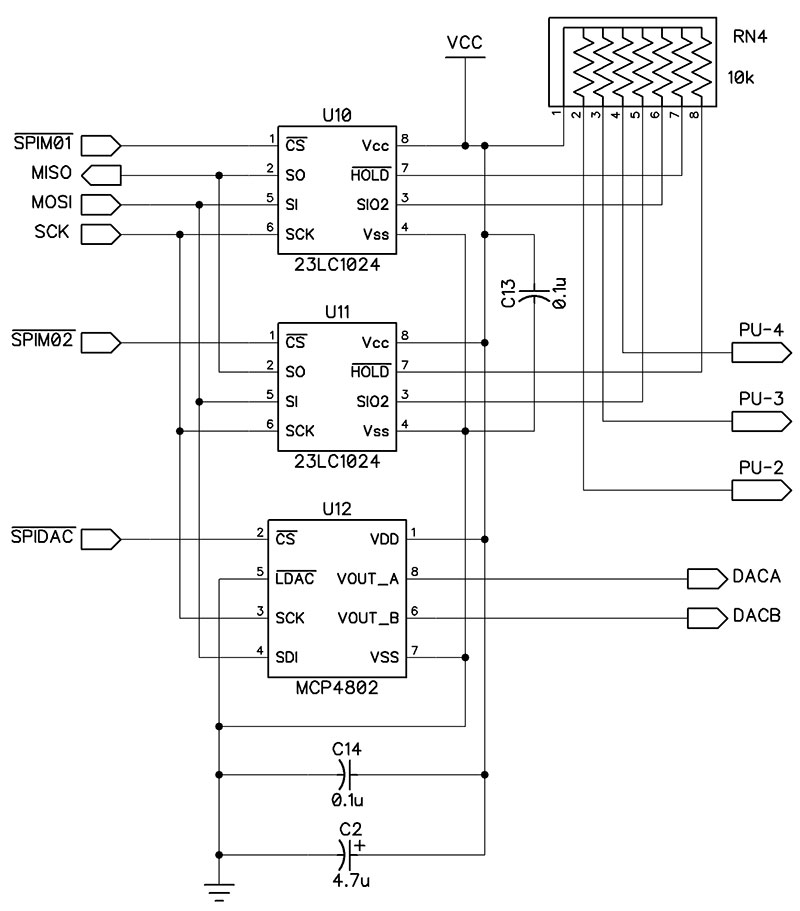 The serial communications schematic is shown in Figure 5. 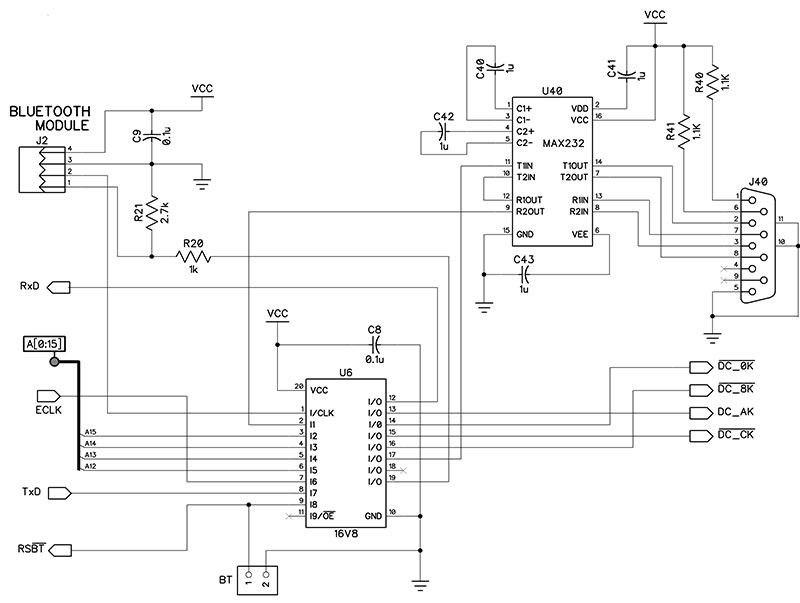 The RS-232 serial connector is a female DB-9 type, wired as a DCE device. This mates directly with the nine-pin DTE connectors found on most PCs or USB-serial adapters. The MAX232 (U40) contains two RS-232 drivers, two RS-232 receivers, and an on-chip charge-pump. The charge-pump uses the five volt supply to generate the bipolar voltages needed by the RS-232 drivers. RTS is received, buffered, and looped back to CTS, so CTS tracks RTS. DCD and DSR are both held in the ON condition.

When pairing, the LP130 should appear as “LP130” when scanning for connections. All data received on the HC-06’s serial input is immediately transmitted wirelessly. When the HC-06 receives wireless data, it’s sent out through the serial interface exactly as it’s received.

The GAL also multiplexes the RS-232 and Bluetooth serial data to the 68HC11. 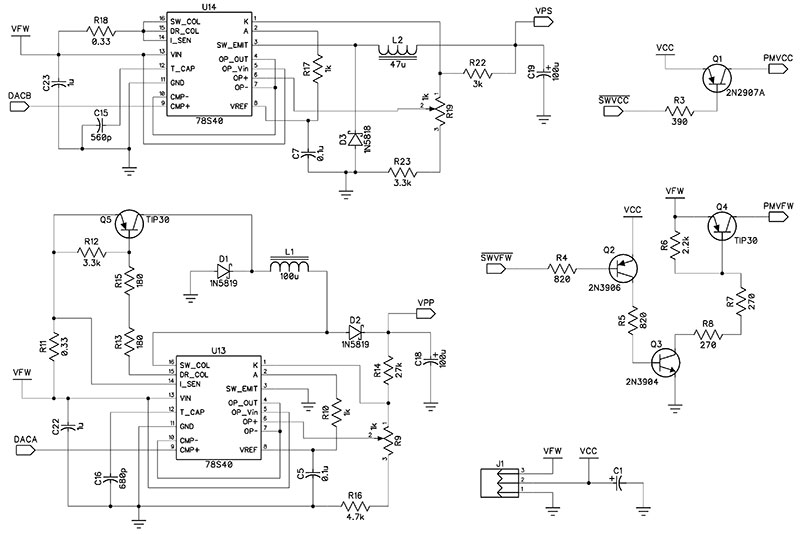 The converter circuits for VPP and VPS are both powered by VFW and both are controlled by voltages from the MCP4802 dual eight-bit DAC. The DAC voltages go to the reference inputs (pin 9) of the 78S40 switching voltage regulators (U13 and U14). The 78S40s will change their output voltage to make the feedback voltage (pin 6) equal the reference input (pin 9).

The VPP circuit is the lower part of Figure 5. U13 is configured as a step up/down switching regulator. This configuration allows VPP to be above or below the nominal 15 volts on VFW. The circuit shown allows VPP to be set from 4.5 to 25.5 volts in 0.1V steps.

The VPS circuit is the upper part of Figure 5. U14 is configured as a step-down switching regulator. VPS powers the programming socket and any other circuitry on the programming module that must operate at the same voltage. The circuit shown allows VPS to be set from 1.8 to 7.5 volts in 0.03V steps.

I’ll have an article in the next issue that will cover the 78S40 universal switching regulator and details of the programmable power supplies. 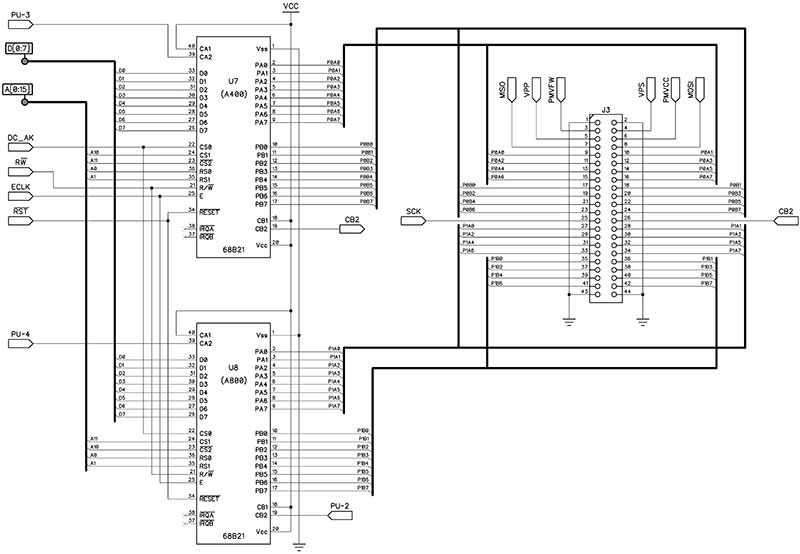 If a particular device doesn’t use all the digital lines or voltages, it’s only connected to those it needs. Programming modules are small and can easily be built using wire-wrap or point-to-point wiring. Many vendors (including Lucid Technologies) sell 44 contact plug-in boards that are perfect for the job.

Whenever the LP130 is turned on, the firmware operating system will initialize the hardware and send an opening menu like the one shown here to the host. Menu selections are made by typing the character in brackets. Any other character will cause the menu screen to be retransmitted.

This option is used to upload the driver for the device you want to program. Drivers are stored as ASCII files in the Motorola S-record format. The upload is accomplished via the ASCII file transfer facility of whatever terminal/communication program you’re using on the host.

After uploading, control should automatically transfer to the driver program and its menu screen should appear. If the LP120 OPENING MENU reappears, use the [J]ump option to start the driver.

Use this option to transfer control to 0100 hex which is the starting address for driver programs.

This option is included as a debugging aid for users who write their own device driver programs. Any portion of the LP120 memory space can be displayed, including the serial RAM.

This test checks the RAM in the 68HC11’s address space from 0040 to 9FFF. Each memory scan writes a test byte at every address, then goes back and reads every address to confirm the data is correct. The test byte is incremented with each new scan.

An “*” is printed on the screen every 256 scans. If an error is encountered, the test will halt and the address of the bad byte will be displayed. The test may be stopped at any time by pressing the ESCape key.

Use this option to calibrate the DC-to-DC converter circuits. This calibration trims the gain of the DC-DC converters so that their outputs match the voltages called for by the microprocessor.

I’ve written device drivers for 2716-27256 EPROMs, 68705P/R/U/J1A microcontrollers, 6801 and 68701/U4 microcomputers, PIC mid-range microcontrollers, and ATF16V8 GALs. All the device drivers were originally written for the LP120 in 6803 assembly language, then reassembled for the 68HC11. Writing the device drivers isn’t hard and the assembly language Toolbox that comes with the LP130 makes it easier. In my experience, the hardest thing is finding and understanding the programming specifications from the chip manufacturers.

Part of the documentation that comes with every LP130 is an assembly language header that contains equates for all the 68HC11 and 6821 registers and firmware Toolbox subroutines. These subroutines provide a programmer’s Toolbox that can handle most of the low-level I/O and data conversion required in any device driver. The complete list of current Toolbox equates is shown in Table 1.

All but two of the Toolbox subroutines are used by executing a Jump to SubRoutine (JSR). The other two are used with a JuMP (JMP) instruction and are more properly thought of as vectors rather than subroutines.

As you’ll notice from Table 1, the Toolbox equates each occupy four bytes. The code in those four bytes consists of another JSR (three bytes) to the actual subroutine in EPROM, followed by a return from subroutine instruction (one byte). This two-level call structure is used to insure compatibility between future upgrades to the LP130 firmware and device drivers.

I use MSGOUT to send all multi-character message data to the host. Load index register X with the address of the first byte in the message, then do a JSR MSGOUT. MSGOUT will send the byte at X, then X+1, X+2, etc. If the value of the next byte is 7E hex (a tilde), a carriage-return and line-feed are sent instead.

If the value of the next byte is zero, MSGOUT does a ReTurn from Subroutine (RTS).

Assembling and executing the following subroutine:

would result in this display on the host: 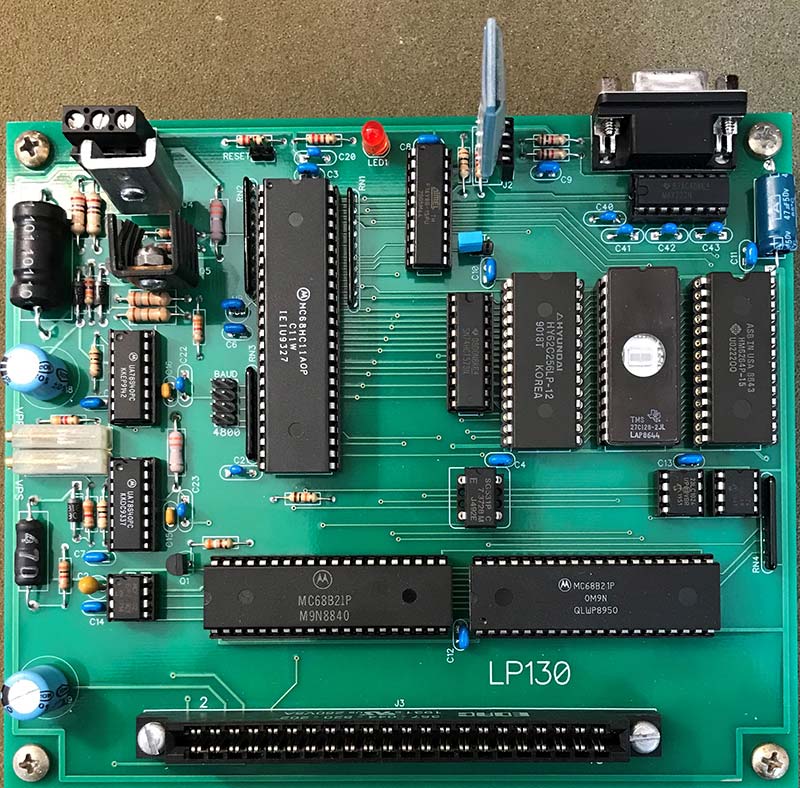 It provides the circuitry needed to program programmable chips and firmware tools to assist writing device drivers. While I do all my programming in assembly language, you could use any language compiler compatible with the 68HC11 to write device drivers.

As an example of its flexibility, I created a plugin module and wrote the driver to test RAM and logic chips.  NV

The LP130 is available from Lucid Technologies at https://lucidtechnologies.info. Send questions or comments to [email protected].