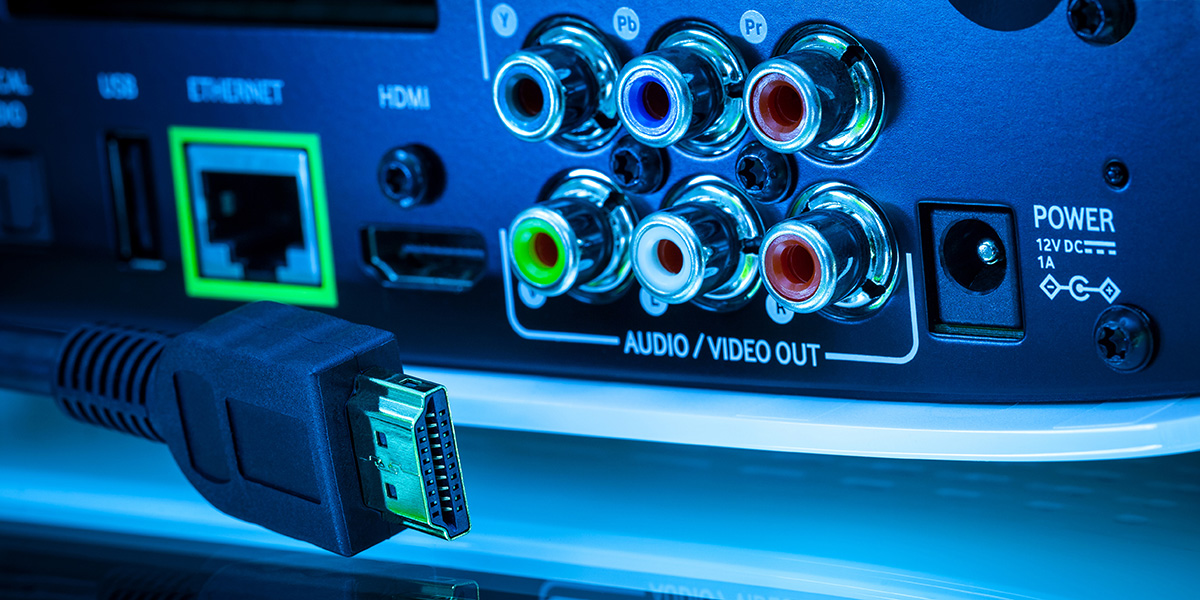 Invariably, video information must be transferred from one device to another. It could be from a satellite set-top box or DVD player to a television — or it could be from one chip to another inside the satellite set-top box or television. Although it seems simple, there are many different requirements and, there­fore, many different ways of doing it.

Until a few years ago, most consumer video equip­ment supported only analog video. Digital video was confined to professional applications, such as video editing.

The average consumer now uses digital video every day, thanks to continually falling costs. This trend has led to the development of DVD players and recorders, digital set-top boxes, digital television (DTV), portable video players, and the ability to use the Internet for streaming video data.

While color broadcasts were being devel­oped, attempts were made to transmit color video using analog RGB (Red, Green, Blue) data. However, this technique occupied 3x more bandwidth than the current grayscale solution, so alternate methods were developed that led to using Y, U, and V data to repre­sent color information. A technique was then developed to transmit this Y, U, and V information using one signal — instead of three separate ones — in the same bandwidth as the original grayscale video signal. The general relationship between YUV and gamma-corrected RGB (R´G´B´) is:

The resulting NTSC composite video signal (Figure 1) is what the NTSC, PAL, and SECAM video standards are still based on today. 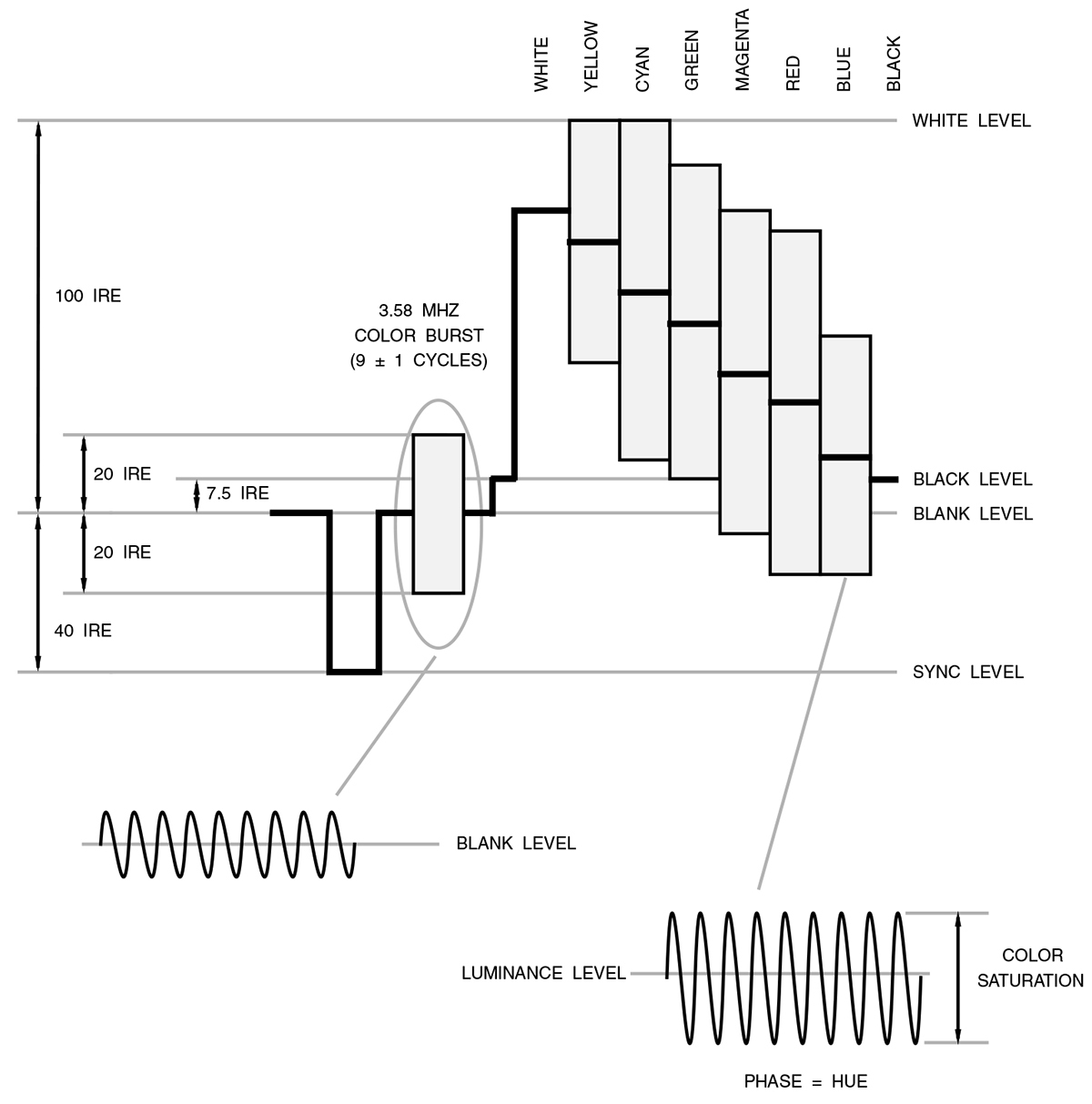 S-video was later developed for connecting con­sumer equipment together (it is not used for broadcast purposes). It is a set of two analog signals — the grayscale (Y) signal (shown in Figure 2) and the chroma (C) signal that carries the U and V color information in a specific format (shown in Figure 3). 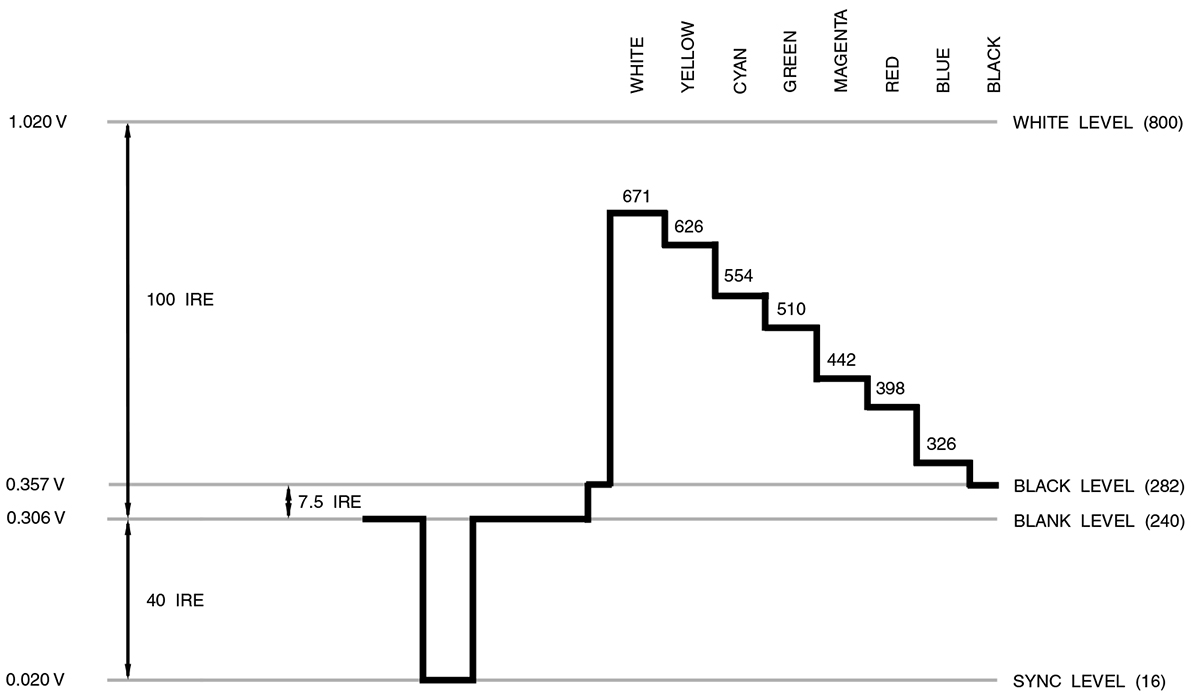 Note that if Y and C are added together, the result is a composite video signal. Once available only for S-VHS, S-video is now sup­ported on most consumer video products.

Although always used by the professional video market, analog RGB video data has made a temporary come-back for connecting high end consumer equipment together. Like S-video, it is not used for broadcast purposes.

A variation of the analog YUV video signals called YPbPr — illustrated in Figure 4 — is now commonly used for connecting consumer video products together. Its primary advantage is the ability to transfer high definition video between con­sumer products. Some manufacturers also label these YPbPr connectors as YUV, YCbCr, or Y(B-Y)(R-Y). 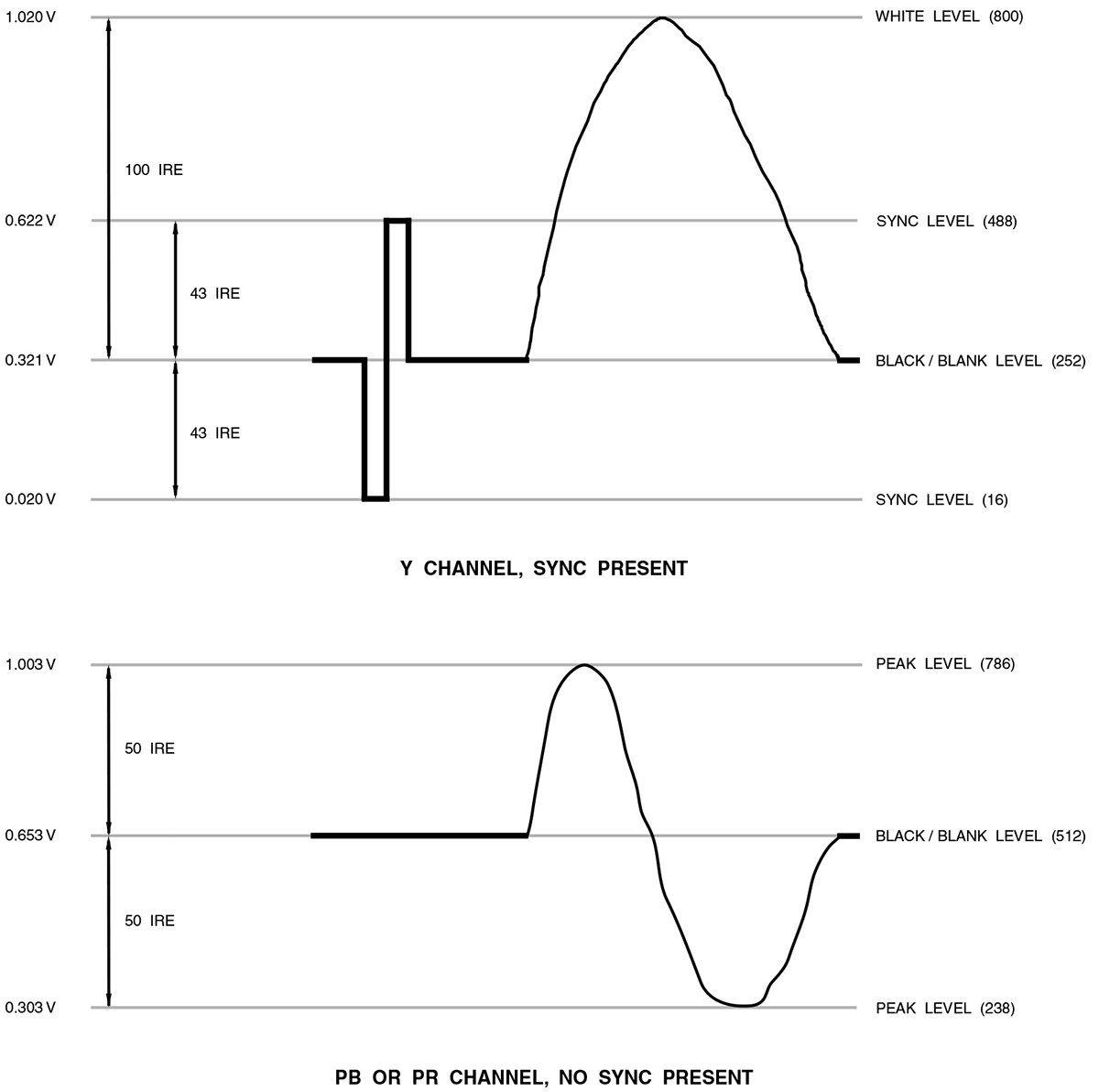 Each still image is also composed of scan lines — lines of data that occur sequentially, one after another, down the display, as shown in Figure 6. 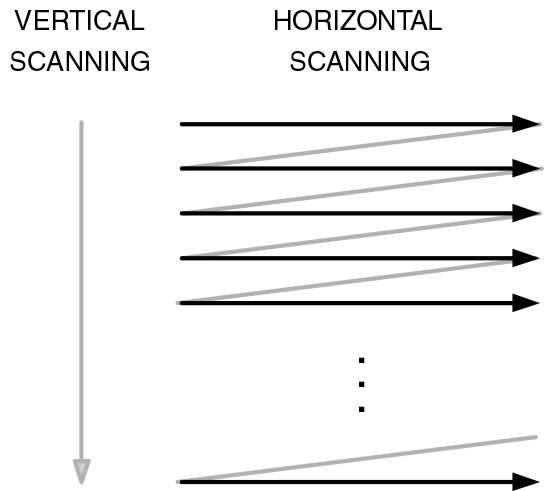 FIGURE 6. Progressive displays “paint” the lines of an image consecutively, one after another.

The composite sync signal is a combination of both vertical and horizontal sync. Computer and consumer equipment that uses analog RGB video usually uses technique 1 or 2. Consumer equipment that supports composite video or analog YPbPr video usually uses technique 3. For digital video, either technique 1 is commonly used or timing code words are embedded within the digital video stream.

Interlaced vs. Progressive
Since video is a series of still images, it makes sense to simply display each full image consecutively, one after the another. This is the basic technique of progressive — or non-interlaced — displays. For progressive displays that “paint” an image on the screen (such as a CRT), each image is displayed starting at the top left corner of the display, moving to the right edge of the display. The scanning then moves down one line and repeats scanning left-to-right. This process is repeated until the entire screen is refreshed, as seen in Figure 6. 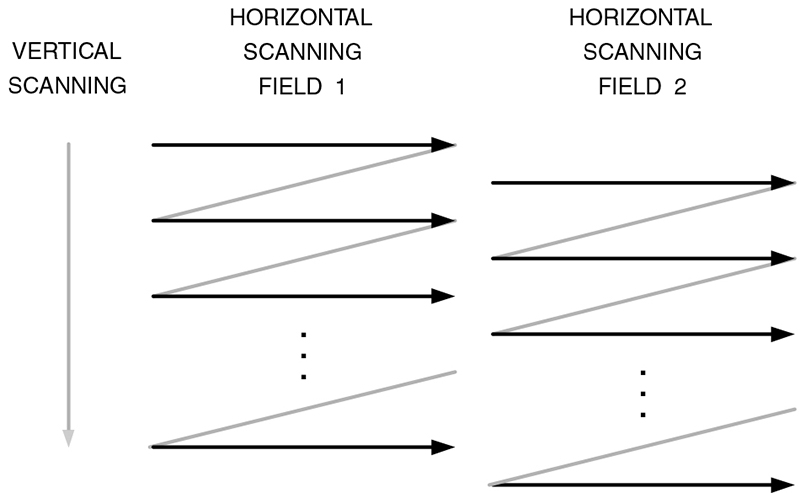 FIGURE 7. Interlaced displays first “paint” one half of the image (odd lines), then the other half (even lines).

Given this advantage of interlacing, why bother to use progressive?

With interlace, each scan line is refreshed half as often as it would be if it were a progres­sive display. Therefore, to avoid line flicker on sharp edges due to a too-low refresh rate, the line-to-line changes are limited, essentially by vertically lowpass-filtering the image. A pro­gressive display has no limit on the line-to-line changes, so it is capable of providing a higher resolution image (vertically) without flicker.

Today, most broadcasts (including HDTV) are still transmitted as interlaced. Most CRT-based televisions are still interlaced, while LCD, plasma, and computer displays are progressive.

Not too long ago, DVI was introduced to consumer products for transferring digital RGB video between components. In 2004, the trend has shifted to using HDMI, which has the advantage of a smaller connector, the ability to transfer digital audio, and the ability to support both the RGB and YCbCr digital video formats.

There is always the question, “What is the best connection method for equipment?” For DVD players and digital cable/satellite/terrestrial set-top boxes, the typical order of decreasing video quality is:

Some may disagree about the order. How­ever, most consumer products do digital video processing in the YCbCr color space. There­fore, using YCbCr as the interconnect for equipment reduces the number of color space conversions required. Color space conversion of digital signals is still preferable to D/A (digi­tal-to-analog) conversion, followed by A/D (analog-to-digital) conversion, hence the posi­tioning of DVI above analog YPbPr.

Video resolution is one of those “fuzzy” things in life. It is common to see video resolu­tions of 720 x 480 or 1,920 x 1,080. However, those are just the number of horizontal sam­ples and vertical scan lines and do not neces­sarily convey the amount of useful information.

Therefore, video is usually measured using “lines of resolution.” In essence, how many distinct black-and-white vertical lines can be seen across the display? This number is then normalized to a 1:1 display aspect ratio (dividing the number by 3/4 for a 4:3 display or by 9/16 for a 16:9 display). Of course, this results in a lower value for widescreen (16:9) displays, which goes against intuition.

Standard Definition
Standard definition video is usually defined as having 480 or 576 interlaced active scan lines and is commonly called 480i or 576i, respectively.

Enhanced Definition
Enhanced definition video is usually defined as having 480 or 576 progressive active scan lines and is commonly called 480p or 576p, respectively.

The recent advances in consumer electronics — such as digital television, DVD players and recorders, digital video recorders, and so on — were made possible due to audio and video compression based largely on MPEG-2 video with Dolby® Digital, DTS®, or MPEG audio. New audio codecs (such as MPEG-4 HE-AAC and WMA Pro) and new video codecs (such as H.264 and SMPTE VC-1) offer much better compression than legacy codecs for the same quality. These advances are enabling new ways of distributing content (both to consumers and within the home), new consumer products (such as portable video players and mobile video/cell phones), and more cable/satellite channels.  NV