How about some help on a circuit for an audible continuity tester that will have a sensitivity of only a few hundred ohms at worst? The tester I have squawks at connections as high as 25,000 ohms.

The following circuit is based on a NASA design from the 80s. I've upgraded it just slightly to take advantage of today's superior ICs. Built around an LMC662 op-amp acting as a comparator, the tester can be adjusted to indicate continuity for resistance up to 35 ohms and no higher. 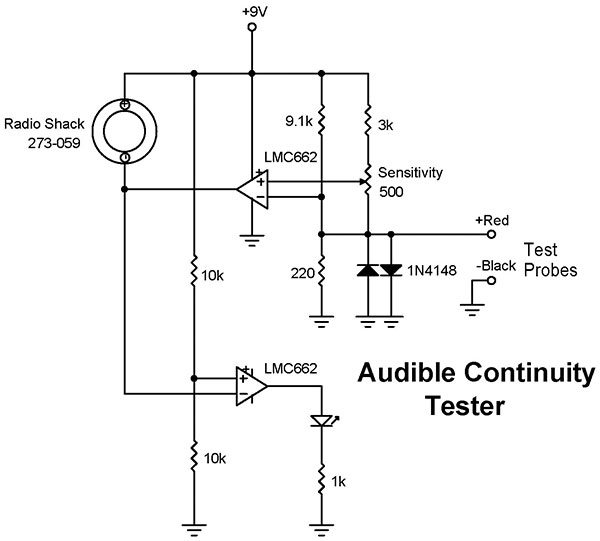 For example, if you set the sensitivity to 30 ohms, the tester will emit a tone if the resistance between the probes is 30 ohms or less. If the resistance is 30.2 ohms, the buzzer remains silent. I also threw in an LED for visual effect, but mostly because I had an empty op-amp to contend with. The tester is easily calibrated using a fixed resistor. As an added bonus, the parallel diodes (1N4148) limit the voltage across the probes to 0.6 volts, which means you can use the tester in-circuit (with power off!) without fear of damaging sensitive semiconductor devices.