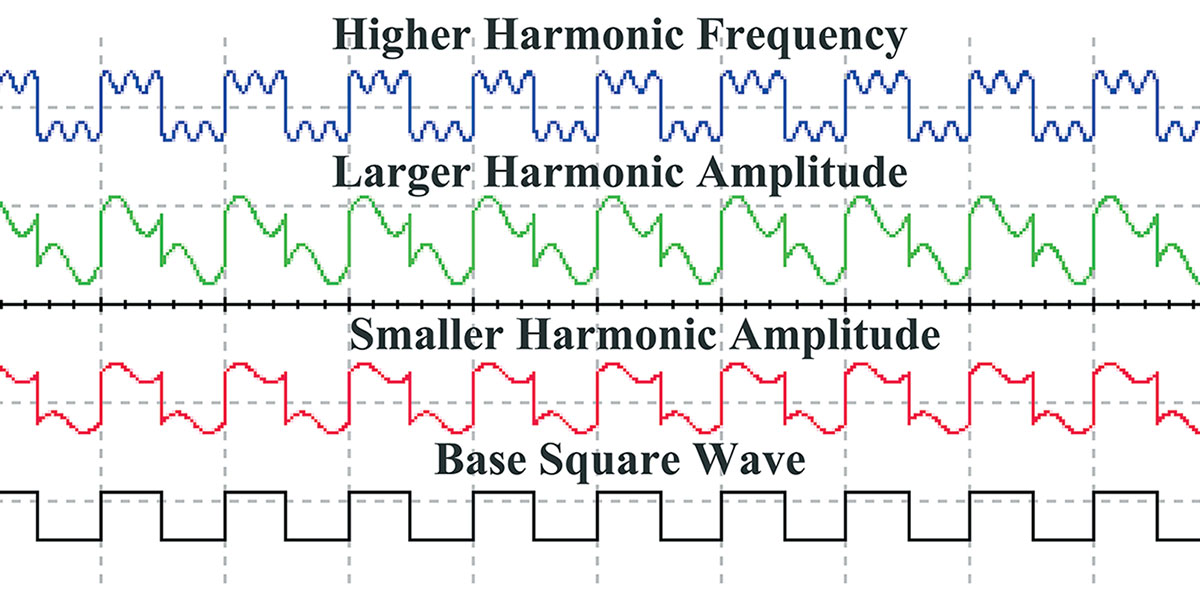 To start off, I simulated a base square wave with a sine wave harmonic at twice the base frequency as in Figure 1. 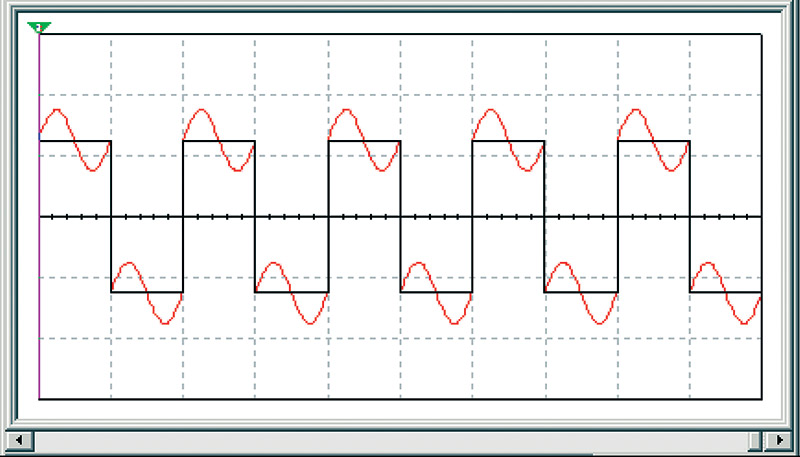 Figure 2 shows the simulated circuit used to create the wave form in Figure 1. 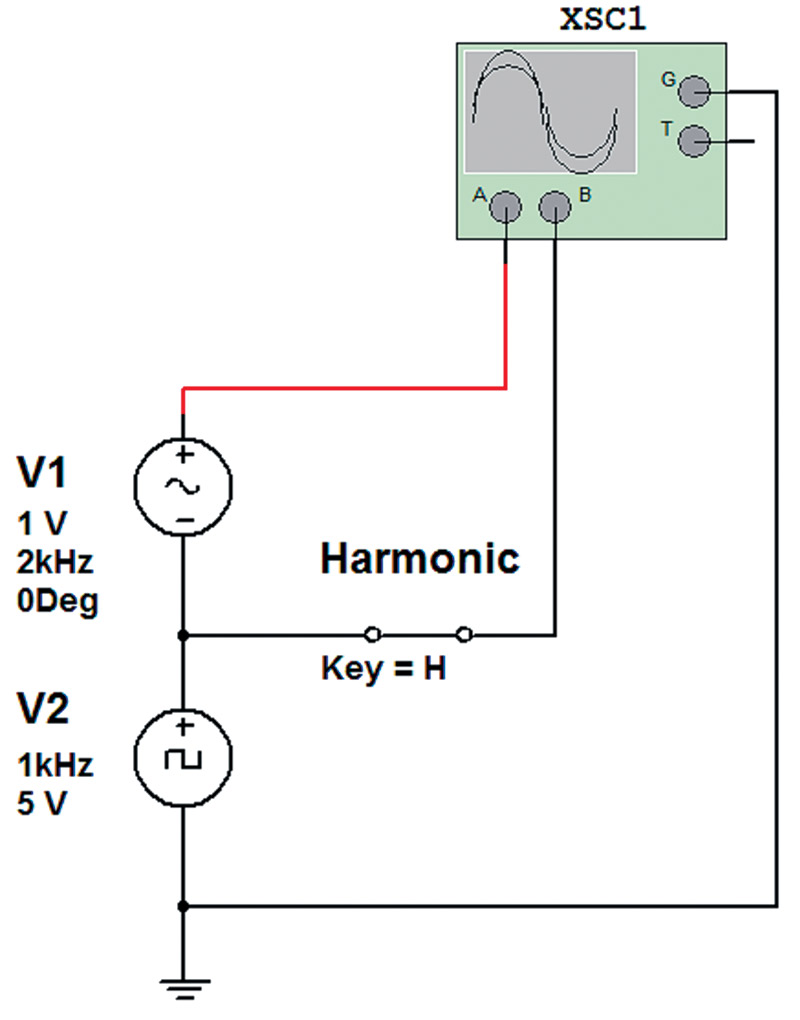 A harmonic switch was added so that the enhancement could be switched off and the base frequency waveform viewed. The operation of the harmonic switch is demonstrated in Figure 3. 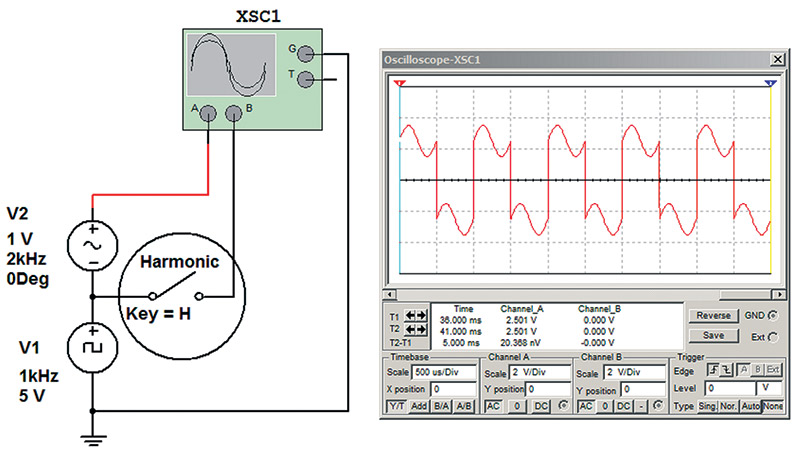 FIGURE 4. The effect of harmonics on base signals.

In Figure 5, I took one of the signals in Figure 4 and (using Microsoft Paint) shifted the position of the traces so as to recreate the harmonic signal. Below that, I compared one cycle to another by overlapping the signals.

Let’s look a little more deeply at harmonics. The thing that is significant about harmonics is that they are stable, repeating every cycle. If I shift the harmonic in Figure 2 by 300 Hz, you will see that the red signal shifts in phase between cycles of the square wave. Figure 5 shows a square wave with a non-harmonic signal at near twice the base frequency.

Visualizing the frequency content of a waveform is challenging. This is most true with live signals with their constant small changes. If possible, store the trace and look back at it in a stationary form. Focus in on the characteristics of the waveform that are stable, keeping in mind how the base waveform looked. Figure 6 shows the original base waveform placed on top of the harmonic signal to highlight the differences. 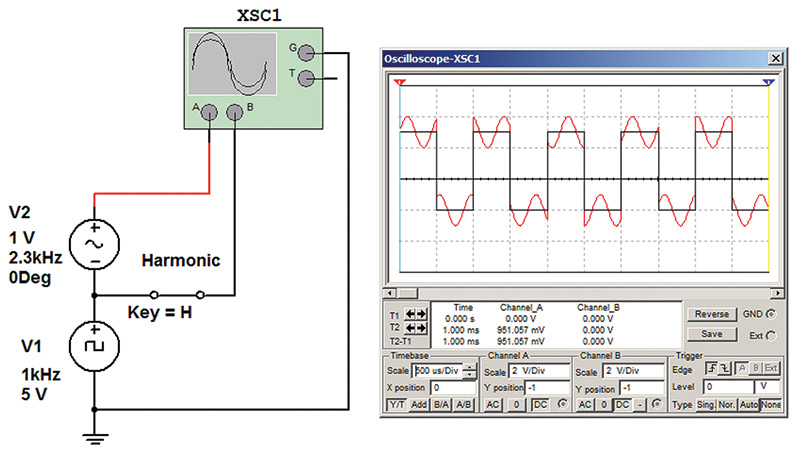 You are looking for variations in the signal that repeat from cycle to cycle, not just random changes in the signal. Figure 7 is an illustration of a square wave with non-harmonic interference. Note the variation in the change between cycles. 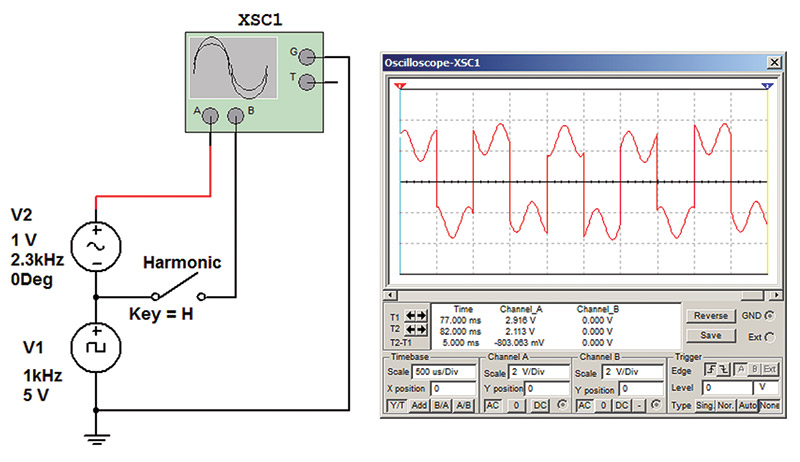 This technique is not good for harmonics alone. It can also be used to identify near-harmonic interference. This is in many cases as accurate as necessary, for example, when selecting a filter. Make note of the number of changes that occur within a waveform cycle and the shifting position of the changes. This is easiest when you’re able to observe several cycles at once. 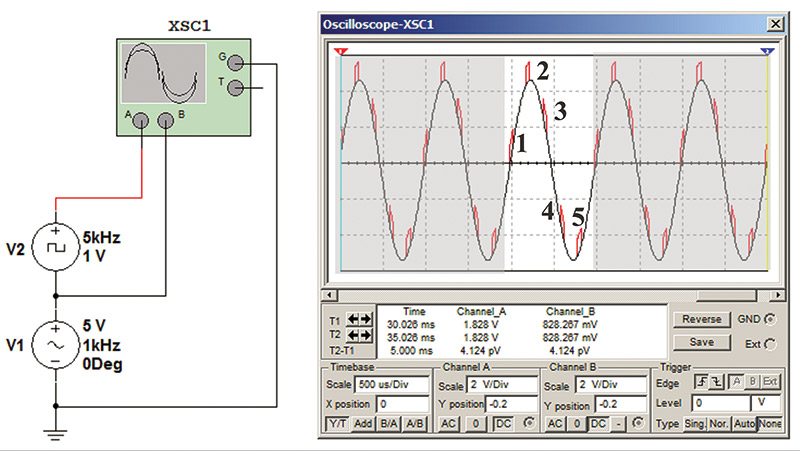 FIGURE 9. Sine wave with a square wave at the fifth harmonic.

The number of the harmonic corresponds with the number of times the change occurs in a cycle. In this case, the change that occurred was five red pulses that appeared in each full cycle of the sine wave.

In a square wave, the level of each harmonic should equal the base amplitude divided by the harmonic number. Observe how Figure 11 more closely approximates a square wave. 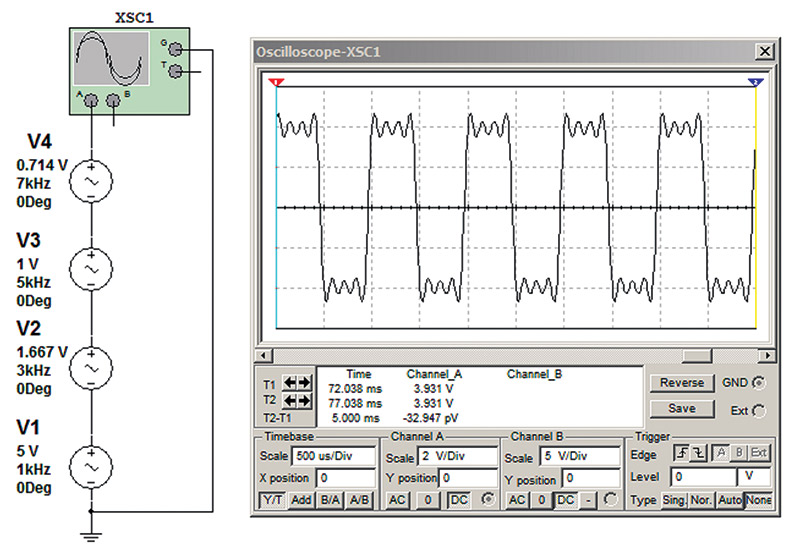 Both triangle and square waves contain the same harmonics; it is only the harmonic mix that is different. Triangle waves contain less energy in their harmonics, and as a result more closely resemble a sine wave (as illustrated in Figure 12). 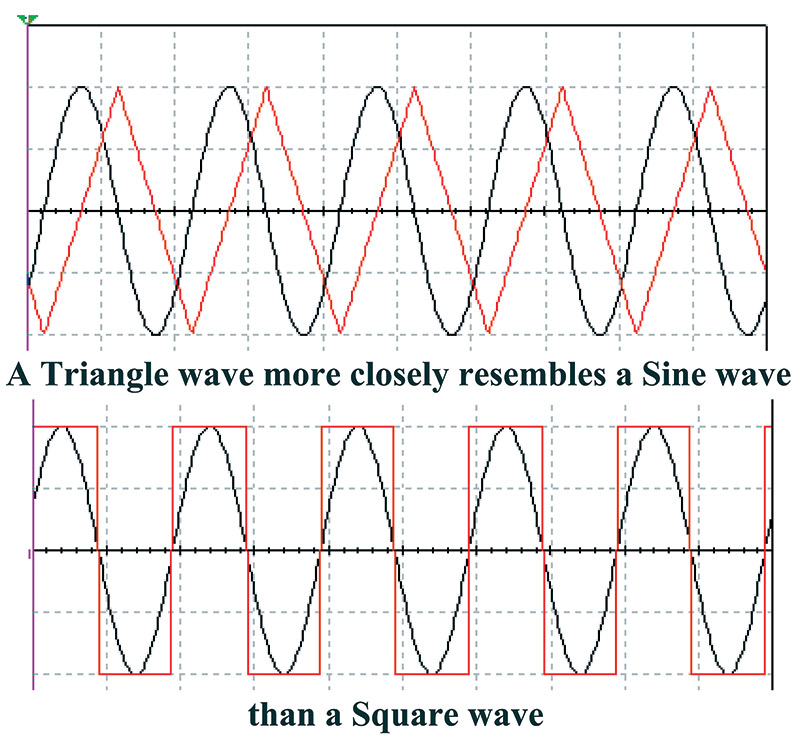 This information can form a base line for testing filter circuits. In Figure 14, a square wave was sent through both a high pass and a low pass filter. The high pass filter blocked the base frequency while passing the higher harmonics; this produced spiking or rapid changes in levels which is indicative of high frequencies. The low pass filter passing the base frequency while blocking the higher harmonics produced a waveform resembling a sine or triangle wave, which is indicative of lower energy in the harmonics. 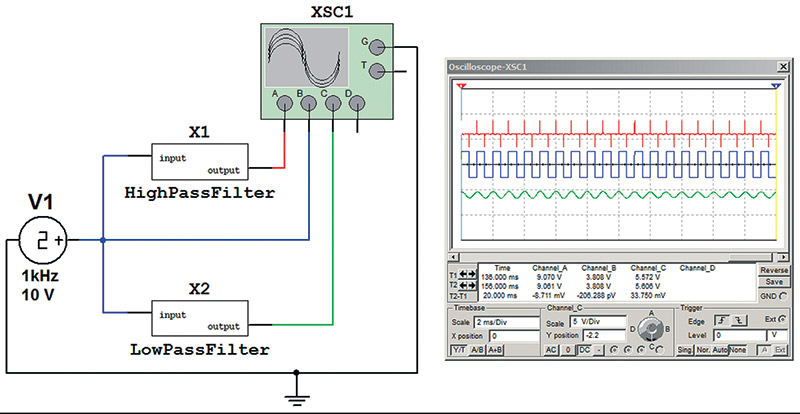 When using a building block approach to produce a square wave, it is impossible to supply every harmonic. So, the question is how many harmonics are adequate. The answer is the more harmonics used, the faster the square wave will change levels, and the longer the flat areas will be on the top and bottom.

Figure 15 shows a signal made of just the first and third harmonic in black compared to a real square in red. You can see the flat areas of the square wave are larger and the time it takes for the square wave to change levels is faster. The good square wave is indicated by the reduction in rise and fall times and the longer flat regions. 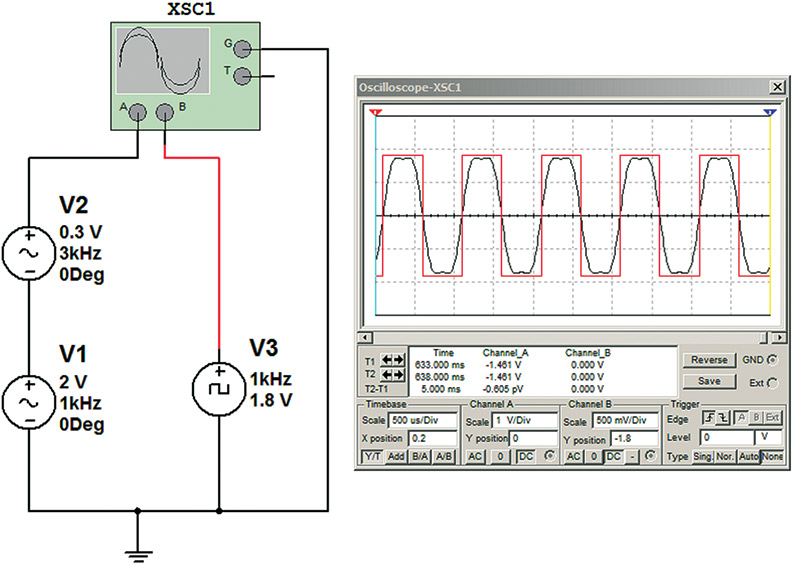 Square waves can be used to evaluate sound systems. In Figure 16, a square wave was input into a simulated speaker where the impact was captured on an oscilloscope. 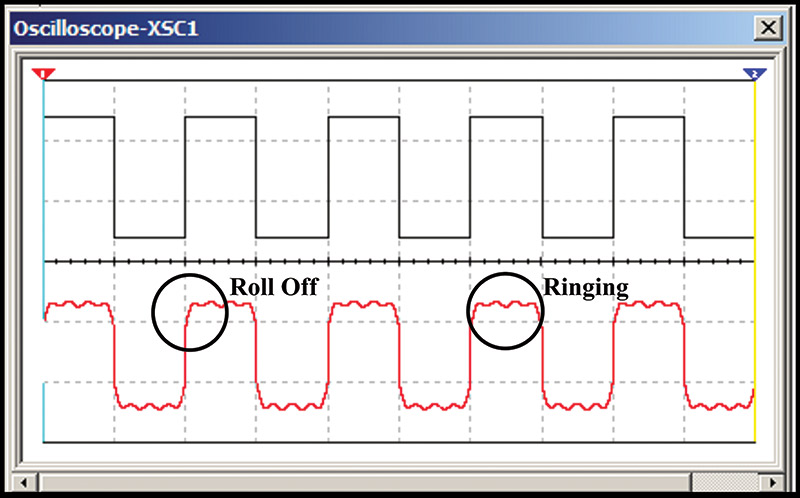 FIGURE 16. Roll off and ringing.

This technique can be used to detect high and low frequency roll-off, as well as over-shoot and ringing. If you are heavily into sound engineering and want to use this process to evaluate systems, you will need a high bandwidth square wave in order to capture all the harmonic information. This combined with the FFT (Fast Fourier Transform) feature now available on many oscilloscopes offers a great tool for the comparison of sound systems.

With simulation programs and a building block approach, you can systematically look at the structure of complex signals. The building block approach allows for the testing of electronic circuits under very controlled conditions. This technique also enables precise control of signal bandwidth and spectral content.

The building block approach can be used to produce a variety of complex wave forms including AM and SSB. It can be used to inject noise into a signal and test the performance of various types of detectors.

These simulation techniques can be looked at by the technician and the technical educator as tools for testing, comparing, and explaining various circuits.  NV