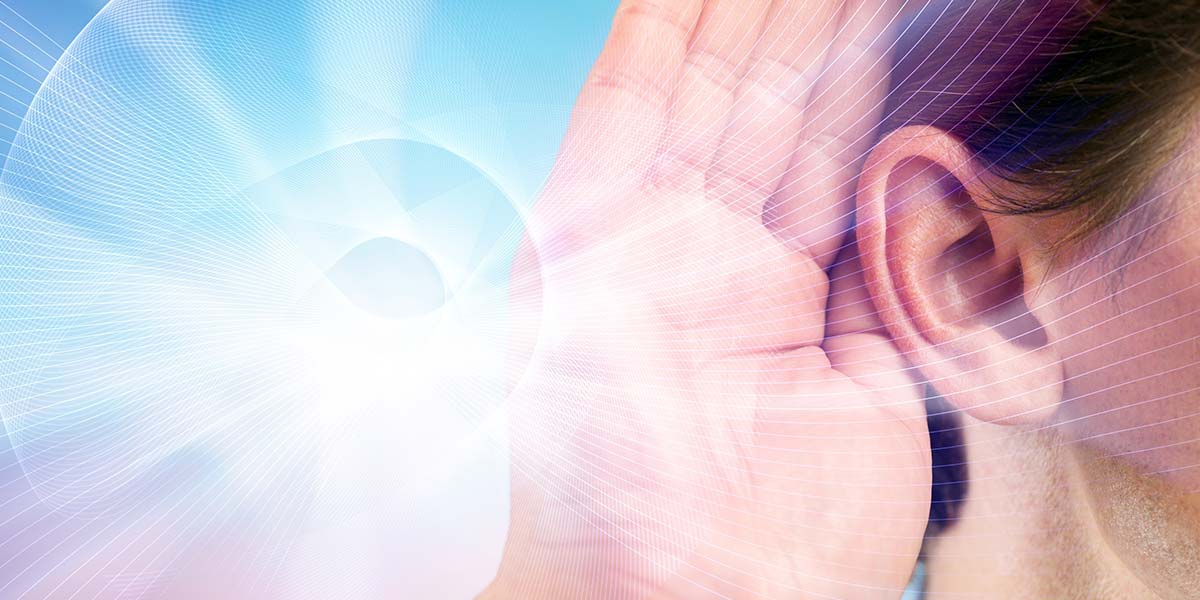 Build a Wireless Doorbell Pager for the Deaf

Here’s a simple wireless doorbell pager circuit you can build for those who have lost their hearing. Its construction consists of a wireless doorbell receiver circuit and one 555 IC configured as a “one shot” that’s used to trigger a small vibrating pager motor. Although the final unit is a little bigger than a normal sized pager, the 3D printed enclosure presented here can still fit comfortably into a shirt or pants pocket. This is a great device for those who need to know when an Amazon package or a friend/relative has arrived at the front door.

With that in mind, I decided to cannibalize a cheap ($10) battery operated wireless doorbell by removing the circuit board (receiver), speaker, and antenna (see Figure 1, Figure 1a, and Figure 1b). 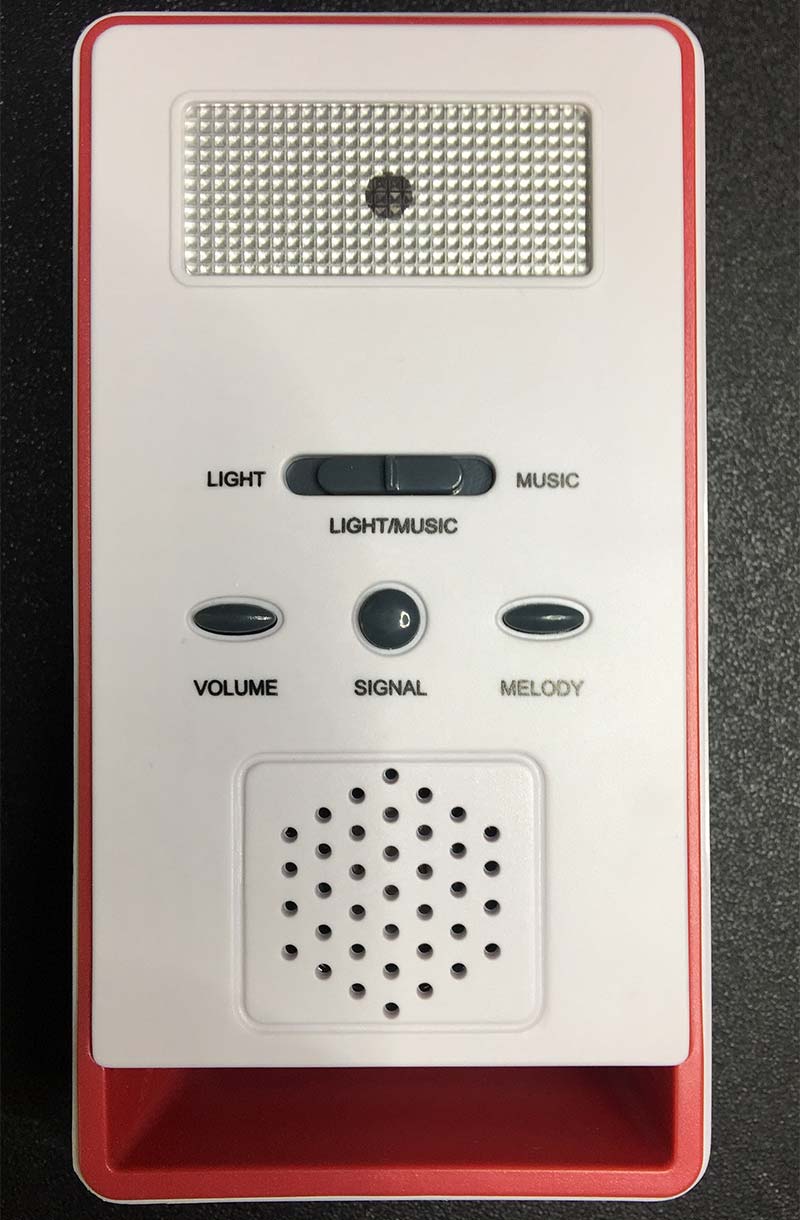 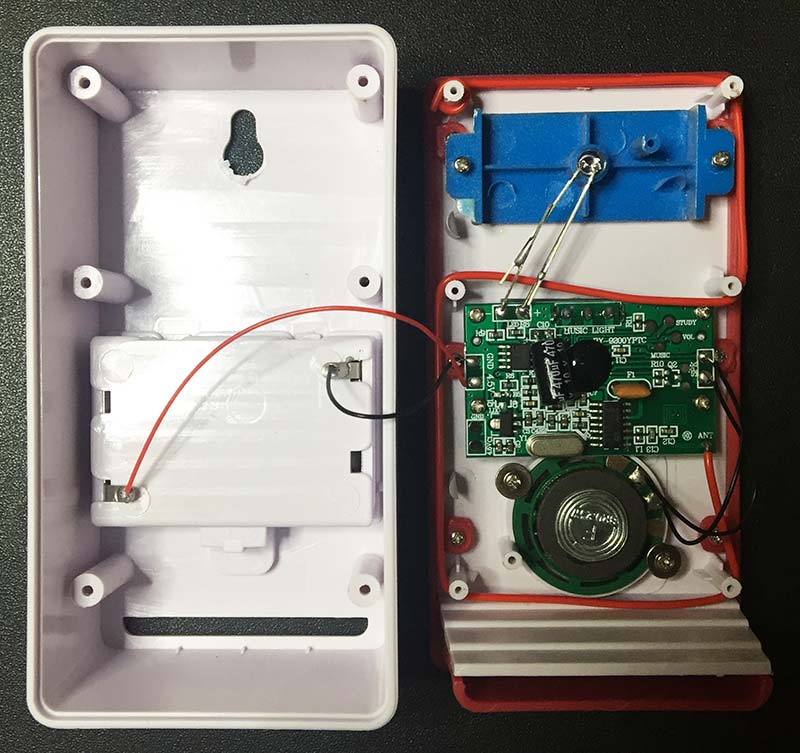 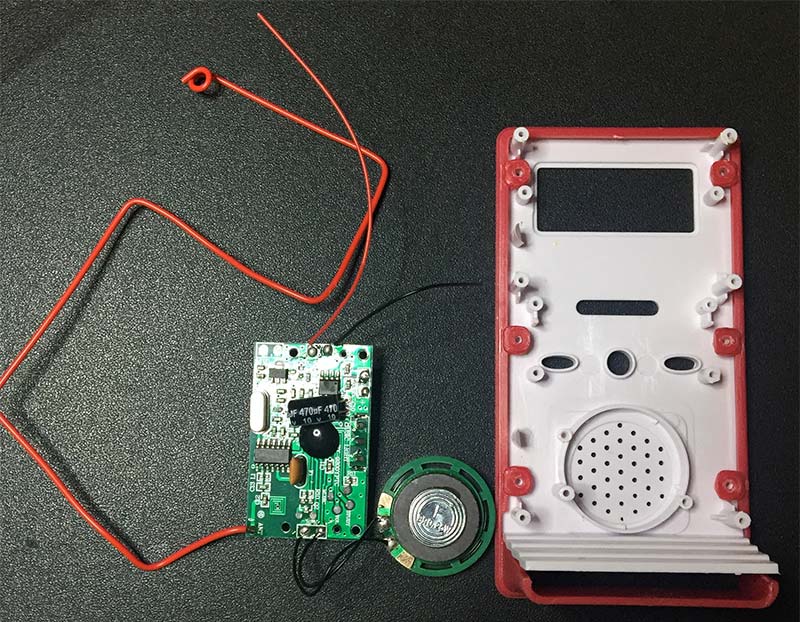 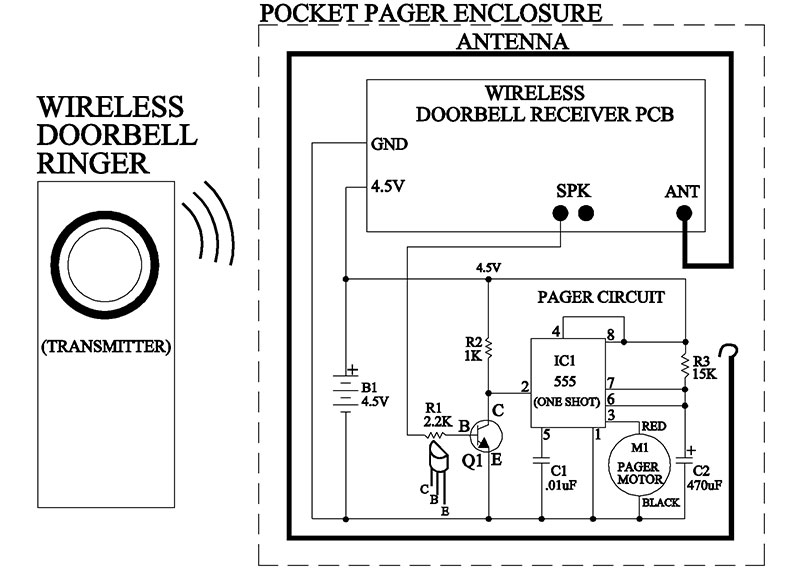 As you can see in the top portion of the diagram, I connected the ground (GND), 4.5V, and one speaker (SPK) wire from the doorbell receiver printed circuit board (PCB) to my pager circuit using only three connections.

The starting sequence begins when someone at the front door pushes the wireless doorbell button (transmitter). Next, the doorbell receiver PCB picks up the signal from the doorbell ringer and sends a ring tone (i.e., voltage) to the speaker. The speaker voltage switches from zero volts to 1.6 volts.

This low to high transition is applied to the base of Q1 through R1. This turns on transistor Q1 (NPN). Since the collector voltage and pin 2 are normally sitting at 4.5V, the collector of Q1 will go low (0V). Since pin 2 (trigger) is connected to the collector, it will see this high to low transition and force pin 3 (output) to go from a low to a high state. Now, since pin 3 is connected to a pager motor, the motor will vibrate for 7.75 seconds. After 7.75 seconds, pin 3 will go low and turn off the pager motor.

Start the construction by removing the doorbell receiver PCB, speaker, and antenna from the store-bought enclosure as shown in Figure 1b.

Next, remove the speaker and discard it, but leave the attached wires on the receiver PCB as long as possible (i.e., clip the wires off near the speaker). The speaker is not necessary because one wire will be connected to R1 on the pager circuit to supply the required 1.6 volts to transistor Q1.

In turn, cut the battery wires off as close to the battery compartment as possible, leaving the power wires (+/-) on the receiver PCB as long as possible. 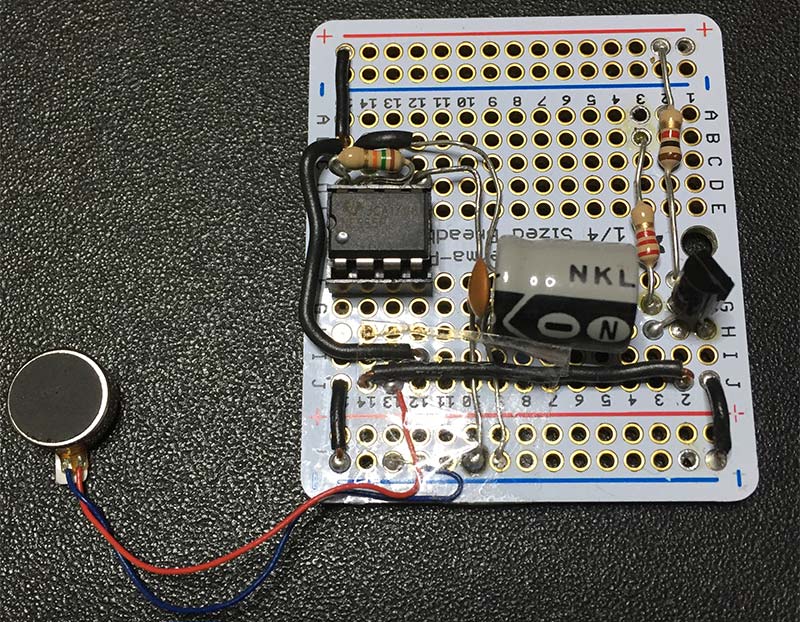 This is the point in the construction that requires attention to detail. Make sure you verify the correct orientation of transistor Q1 and capacitor C2 before soldering them into the pager PCB.

Unfortunately, the wires attached to the pager motor (M1) are really thin. So, after soldering them into place, take some scotch tape and tape the pager motor leads (red/black) to the pager PCB. This will stop the motor vibrations from ripping the wires out of the PCB during testing and operation. 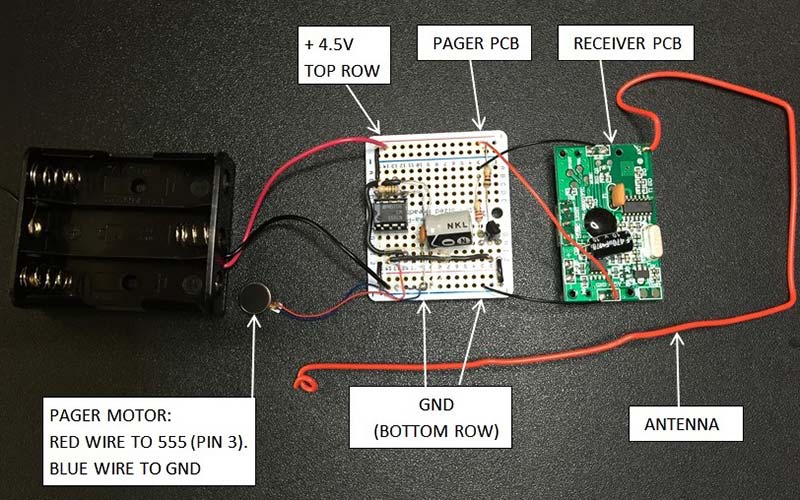 Next, take one wire from the speaker connection (SPK) on the receiver PCB and solder it to the top of R1. Clip the other wire off.

It’s important to put a wide strip of painter’s or masking tape in between the receiver PCB and the pager PCB before placing them into the enclosure. This will isolate the electrical components on both PCBs and reduce the possibility of a short circuit.

[I didn’t use the original enclosure that came with the wireless doorbell for the pager because it was too bulky to fit inside a shirt pocket.

Now, insert the pager PCB, receiver PCB, antenna, and battery holder into the enclosure as shown in Figure 5. 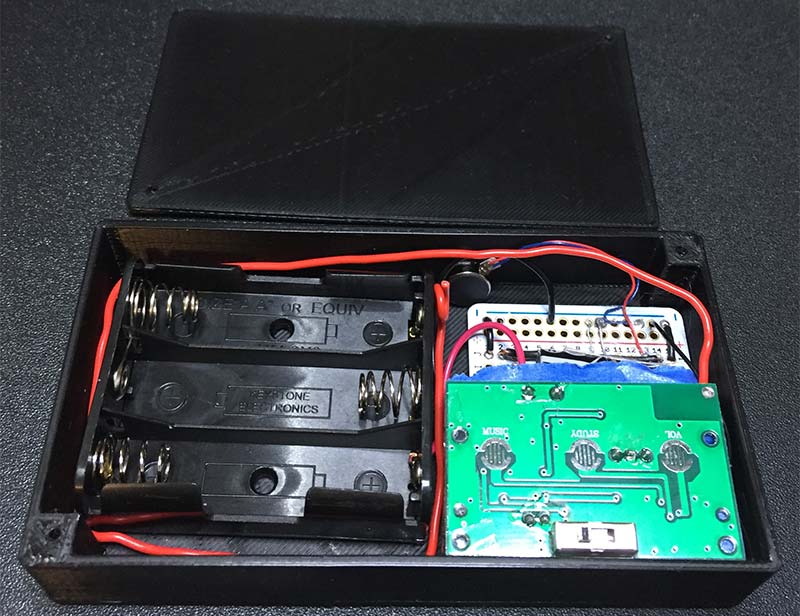 Leave a little space around the battery holder to make room for the antenna.

Next, attach the pager motor to the inside wall of the enclosure using the self-stick tape on the back of the motor.

Finally, hot glue the battery holder in a couple of spots along one edge. All done! Figure 6 shows the final product ready for action.  NV 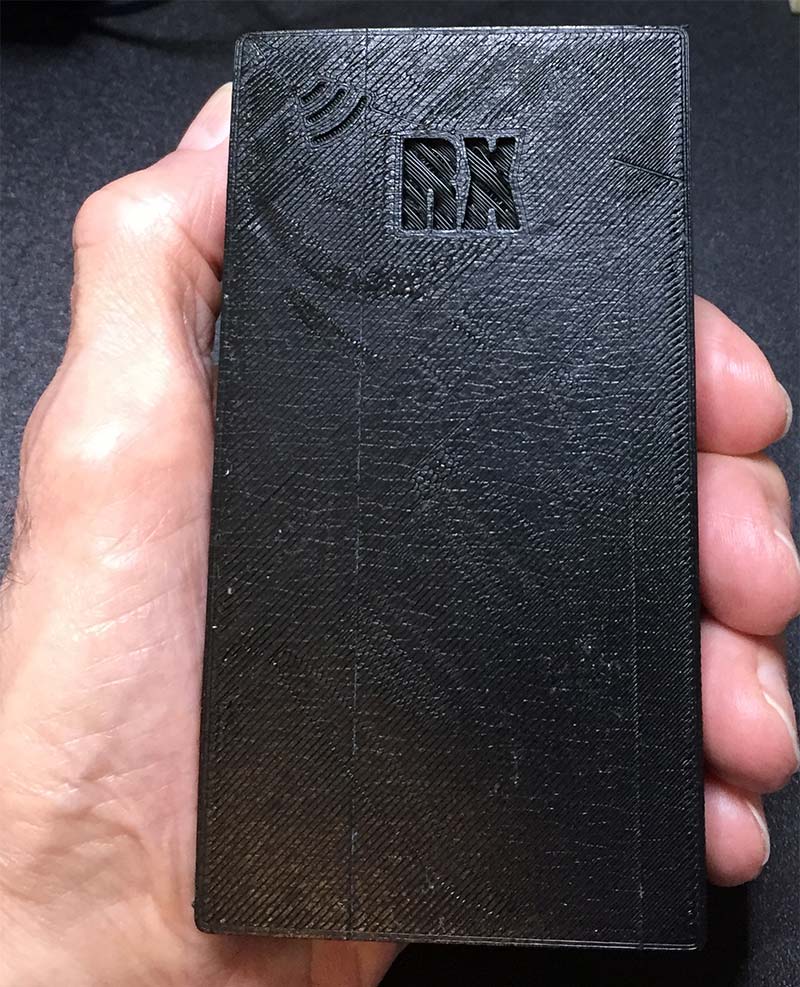