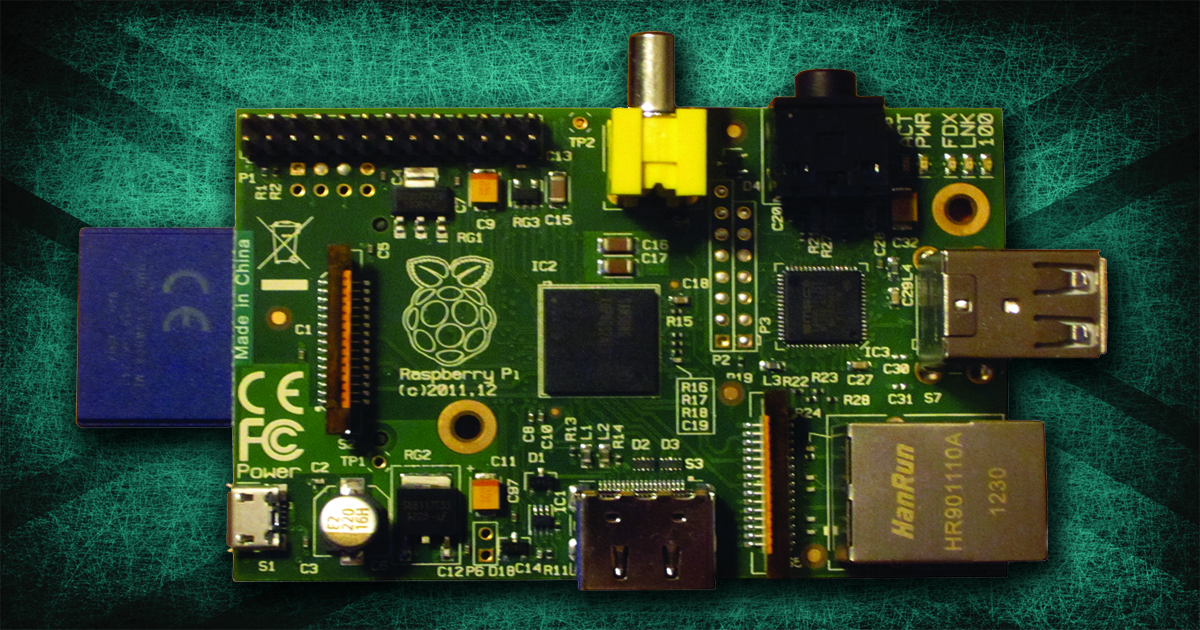 With the cost of most things continually on the rise, it is pleasing to note the price of our intelligent gadgets and that of compute power continues to fall. The cost of computing power dropped again with the introduction of the Raspberry Pi (RPi) — an ARM processor based Linux workstation the size of a credit card (see Figure 1 at top).

This computing marvel was developed in the UK by the Raspberry Pi Foundation (a UK registered charity) with the idea of getting students interested in computer science by making it cheap enough for anyone to afford, and fun enough to capture their interest. The Raspberry Pi Foundation understands computers and programming are integral to the future, but noticed fewer students getting into computer science. With the RPi, they hope to rekindle the excitement over microprocessors that many of us felt in the 1970s and 1980s. I, for one, caught the computer bug at that time and haven't ever gotten over it.

While the Raspberry Pi Foundation’s focus is on the educational market, there has been major demand for RPis in the DIYer/hacker community. A Google search for Raspberry Pi on the Internet will net you seemingly endless projects people are powering with RPis.

It is important to note an RPi is a bare bones single board computer built as inexpensively as possible. When you buy an RPi, you don’t get a case, power supply, display, keyboard, mouse, cables, or storage device. All peripherals must be purchased separately. The idea is to connect your RPi to a USB power source, a TV set with HDMI input, a USB keyboard, and mouse. Even with the additional cost of the required peripherals, a computer system based on an RPi is still a bargain.

The Raspberry Pi Foundation has standardized on two models of the RPi hardware (Table 1) and have also standardized on Python as the programming language. If you don’t program in Python, don’t worry. Many programming languages are available for use with your RPi, including Assembler, C, C++, Java, Basic, plus various shell languages. As an added bonus, most of the software development tools for your RPi are free and open source which lowers the barrier to entry even further.

Many people — myself included — are currently using Arduino controllers in many of their embedded projects. While RPis and Arduinos have a lot in common, they address two different application areas. The RPi has much more computing horsepower (and hardware floating point) than any of the Arduino family, but much less directly useable I/O built onto the board. So, the RPi is a better fit for video applications, robotics, graphical applications, or anywhere there are a lot of computations needing to be done.

Arduinos, on the other hand, have lots of I/O pins which can source and sink lots of current, which makes them perfect for making things move, taking sensor measurements, data collection, driving arrays of LEDs, etc. Arduinos can perform many of the same computational tasks as RPis, but they will take a lot longer to do so.

Another big difference between an RPi and an Arduino is the idea of an operating system. When you program an Arduino, you write code and use libraries that are placed directly on top of the hardware. If you need some new functionality, you either code it yourself or find a library that provides it for you. Also, most code written for an Arduino is single threaded; your application is the only thread of execution running. You have to go to great lengths to run multiple threads on an Arduino.

The RPi, on the other hand, has a full blown, mature, multitasking, multiuser version of the Linux operating system running on it. When you write programs for an RPi, your code runs on top of the operating system and for the most part, is intentionally prevented from directly accessing the hardware. This makes for a more robust and reliable computing environment as any violation of the rules established by the operating system will cause your application/program to be terminated, but will not take the whole computer system down.

A down side of the operating system approach is the learning curve. It can take years to fully understand Linux and what it is capable of. Luckily, you don’t need to understand all of Linux to put it to work. Finally, Linux is a multiuser operating system meaning that multiple people can be logged in at the same time, and each can be doing unrelated, meaningful work without knowledge of each other. By extension, this means your RPi can support many simultaneous users if your application(s) require it.

Arduinos and RPis both use the concept of shields to provide additional hardware features not found on the basic devices themselves. While Arduino shields plug directly onto the Arduino printed circuit board (PCB), the RPi equivalent is attached with a ribbon cable. Since Arduinos have been around longer, there are more shields available for it than for RPis but this situation is quickly changing. Soon there will be shields available for both platforms that perform just about any function you can dream up.

Table 2 provides a basic comparison between the Raspberry Pi and the Arduino families of computing devices.

What I hope to do in this article is to show you how to bring up a brand new RPi so you can start experimenting with it. You will need the following:

The first step in the process is to download the latest Raspbian Wheezy version of Linux from www.raspberrypi.org/downloads and transfer it to your SD memory card. How this is done depends on the type of computer you are using. Detailed instructions for Windows, Mac OSX, and Linux are available at www.elinux.org/RPi_Easy_SD_Card_Setup. With the operating system on the SD card, insert the SD card into your RPi, connect the monitor, keyboard, mouse, Ethernet cable, and power supply. Your RPi should boot up when power is applied, and in the process you should see the boot messages racing past on your monitor.

Once the initial boot completes, the RPi configuration program raspi-config automatically runs; refer to Figure 2. From here, you set your initial configuration and (in a sense) Americanize your RPi. Remember the RPi is a product from the UK, so initially was configured for UK users. Each of the provided menu items are described in Table 3 and suggest how you might want to set each one. If you don’t understand what these configuration items do, don’t worry. Just follow my lead. Use the keyboard arrow keys to move through the menu items and the return/enter key to select the highlighted one.

If you made changes to the defaults, you will be asked to reboot in order for them to take effect. Do so now, if necessary. When your RPi comes back up, it will be running with the configuration changes you just made. If you ever want to change the configuration again, run sudo raspi-config from a shell. 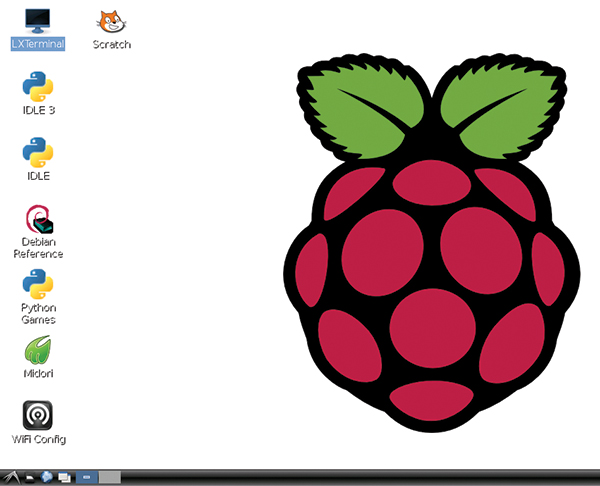 Interacting With Your Raspberry Pi

Once configuration of your RPi is complete, you have numerous ways of interacting with it. You can:

To complete the installation/configuration process for your RPi, you should update the installed software to the latest version possible. Even though you started with the newest Raspbian release, many changes have been made to components of this version since it was made available to the public.

Directly from a shell or using the LXTerminal window on the desktop, execute the following series of commands:

This will cause your RPi to find, download, and install the latest versions of all of the component parts of the Raspbian software. With this, your RPi is up to date.

It turns out the only HDMI display I had in my home was the family’s only TV set. While using the TV as a monitor was fine for a while, I needed a longer term solution. That is when I discovered the AT&T laptop dock (lapdock) for the Motorola ATRIX 4G smartphone. While this discontinued product was built to provide a laptop computer interface to a smartphone, it turns out to work great with a Raspberry Pi. Consider the lapdock’s features: 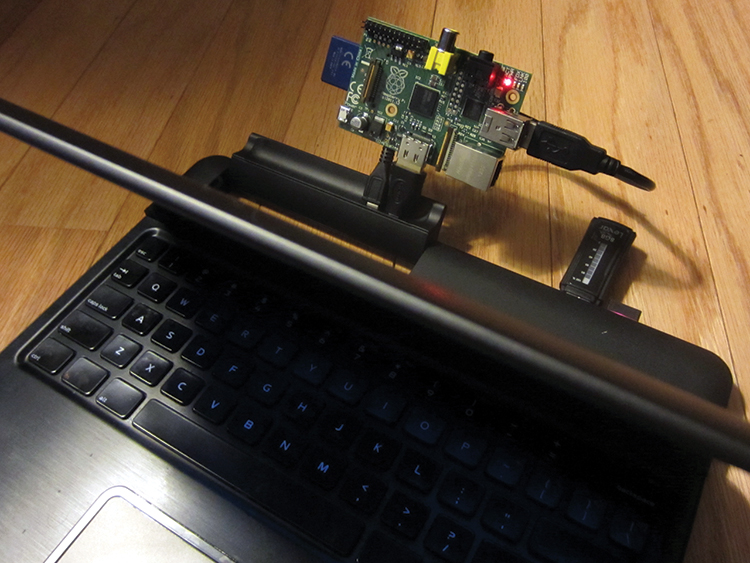 The HDMI interface is taken care of by a HDMI male to micro HDMI female adapter I found on DealExtreme for $4.10. Unfortunately, I wasn’t so lucky on the USB side of things. I needed a short USB cable with a female micro USB connector on one end and a full size male connector on the other. I ended up buying two cables with the required connectors, cutting them apart, and then soldering the two cables together. Figures 4 and 5 show what the finished configuration looks like. Normally, I connect the RPi to the lapdock with the HDMI adapter and my custom cable. I then plug my wireless adapter into one of the USB ports on the lapdock, and sometimes a Flash drive into the other. 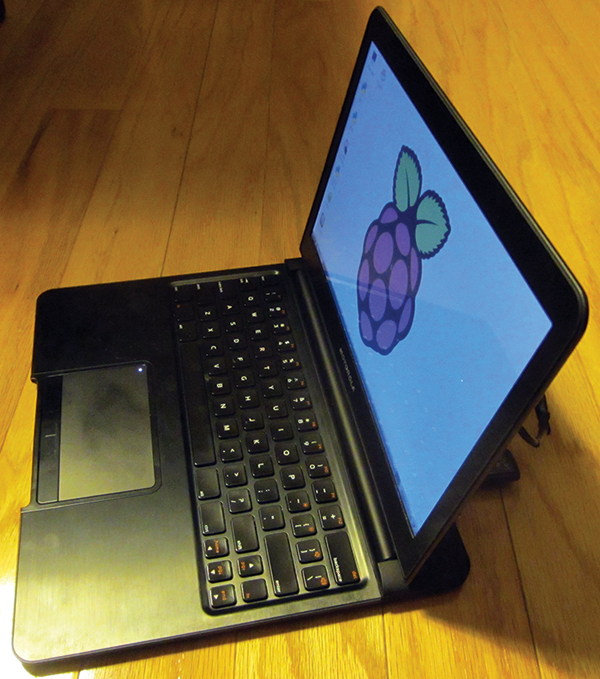 If you followed the directions given in this article, you probably have a working RPi that you are now wanting to do something with. For your first application, how about a simple web server that can deliver multimedia content (images, videos, text, music files) on your local area network. Would you be impressed if I told you this can be done with just one line of code? Try this: 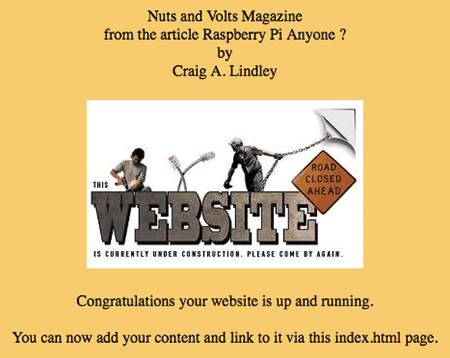 If all is well, you should see the image in Figure 6. You now have a functioning web server to play with.

The Raspberry Pi represents a breakthrough in low cost computing power. It is a nice platform for learning about computers and Linux, as well as for multimedia and other computing/math/graphics intensive applications. I hope the Raspberry Pi Foundation succeeds in its quest to bring more people into computer science as it is a great career to have; at least it has been for me. Next time, I will show you how to turn your RPi into an Internet radio and music file player. Until then, have fun with your new piece of Raspberry Pi!  NV

Craig can be contacted at [email protected].

For more on Raspberry Pi. visit our webstore at store.nutsvolts.com for related books.