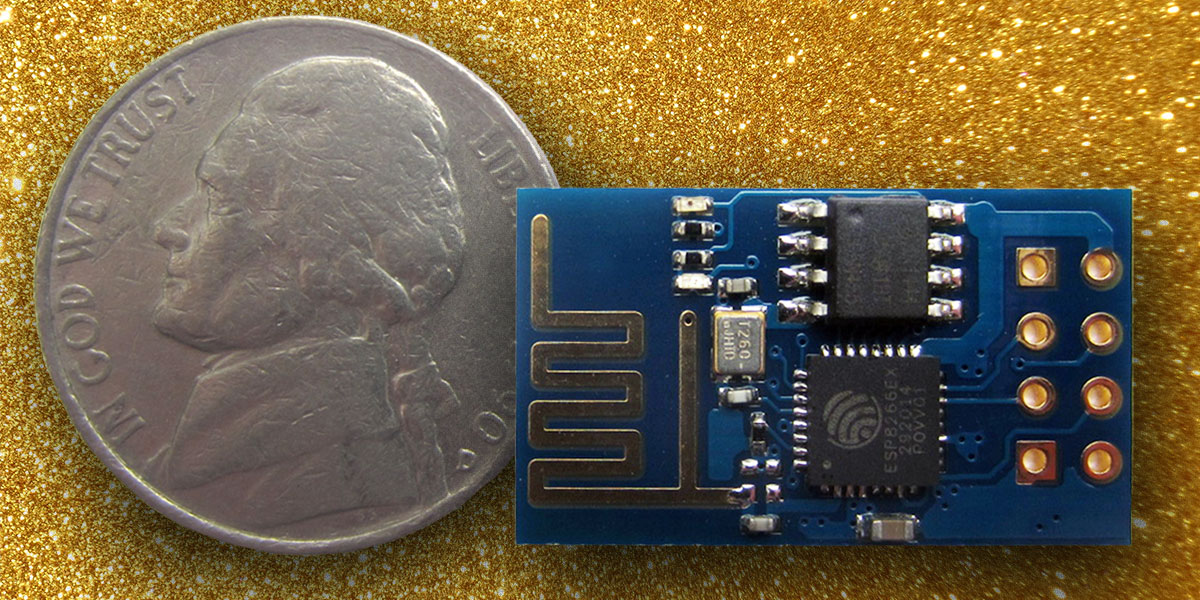 It's not very often that a different piece of hardware comes along and immediately captures the attention of the entire maker community. The Raspberry Pi and the C.H.I.P. are a couple of examples, but the ESP8266 module from Espressif Systems (espressif.com) wins this prize. This little board (PHOTO 1 above) — the ESP8266 module (ESP-01) — is only about the size of a nickel, yet contains a powerful 32-bit microcontroller and a Wi-Fi interface, and it can be purchased for under $10 in single unit quantities

The first projects built with this module all used a microcontroller to control the ESP8266 as a Wi-Fi peripheral using an AT command set over a serial interface. While this was made to work, some of the projects suffered from stability problems as the ESP8266 firmware continued to evolve. Lately, however, a group of enterprising individuals have made the ESP8266 Arduino compatible. This is important for numerous reasons:

Arduino compatibility and the low cost of the ESP8266 are major developments for the Internet of Things (IoT) movement currently sweeping the tech world. Using the ESP8266 allows for very small and inexpensive products to be created that can be controlled and/or monitored remotely.

Note if you plan on putting an ESP8266 module into a commercial product, you will have to pass FCC certification, which can take considerable time and be rather costly.

To understand what a breakthrough this is, consider the cost and size of a traditional Arduino approach to Wi-Fi enabled monitoring and control. First, you have to have an Arduino board (say, an Arduino Uno) from a reputable source which costs between $20 - $30. Then, you have to purchase a Wi-Fi shield for around $20 - $40, bringing the basic system cost to between $40 - $70. Then, consider size. The Uno's dimensions are 2.1” x 2.7”. Attach the Wi-Fi shield and the sandwich is between 1.25” to 1.75” deep and a bit harder to package than the ESP8266 (again, which is the size of a nickel).

Finally, when you consider the ESP8266 has a 32-bit processor which can run at 160 MHz — 10x the speed of the Uno's eight-bit processor — and that it has 512K (minimum) of Flash memory program space to the Uno's 32K, the Uno Wi-Fi solution is looking a little dated.

Actually, the ESP8266 is a whole family of modules which vary in the number of available I/O pins, the amount of onboard memory, the types of interfaces available, and in how the RF antenna is attached/implemented. The module I will be describing in this article (and shown in Photos 1 and 2) is referred to as an ESP-01. This module has its RF antenna etched directly onto the circuit board. 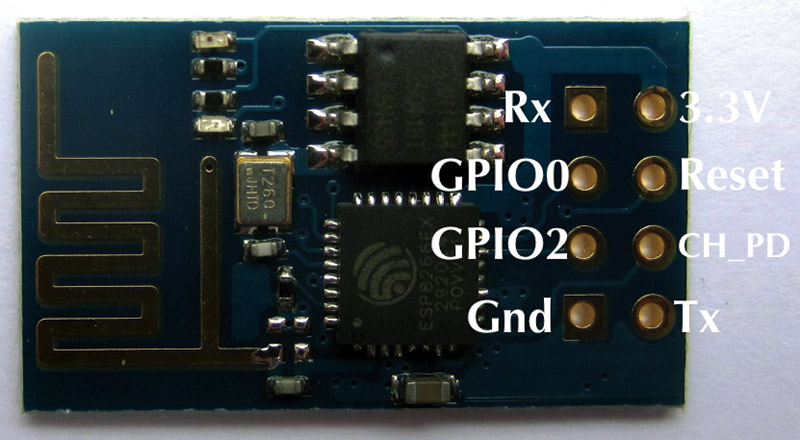 Information on the whole family of ESP8266 devices is available at www.esp8266.com/wiki/doku.php?id=esp8266-module-family.

The following attributes of the ESP8266 family were extracted from the datasheet (see https://nurdspace.nl/File:ESP8266_Specifications_English.pdf):

In other words, the ESP8266 family of modules features low power consumption, high RF power output, and is capable of supporting all of the current 802.11 standards required for Wi-Fi connectivity. In addition, it supports many industry standard hardware interfaces and can also function as the application processor in many designs. Note: The ESP8266 is a 3.3 VDC part. 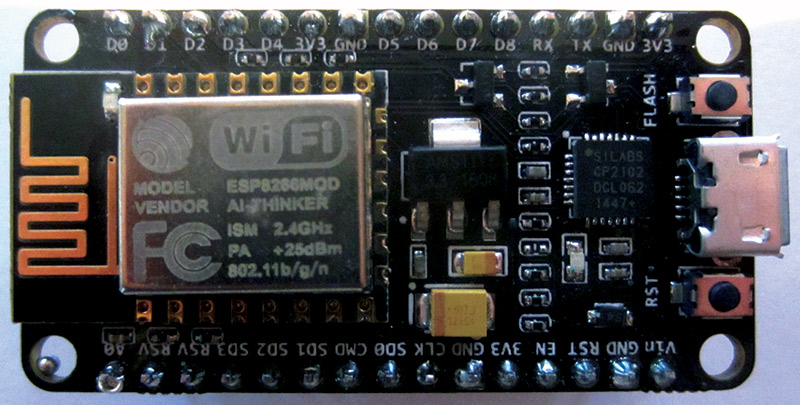 PHOTO 3. An ESP8266 (ESP-12) development module called the NodeMCU Amica with many more I/O pins and memory (4 MBytes) is available. It functions just like the prototype hardware described in this article and is powered directly from the USB port.

Now that we know something about the ESP8266 module family, let's talk about what we need in terms of hardware to try out the ESP8266 in the Arduino environment. In addition to the ESP8266 ESP-01 module, we need some sort of USB-to-TTL serial adapter, a 3.3 VDC power supply capable of at least 250 mA of output current, a couple of momentary pushbutton switches, an LED, and a 1K and a 10K ohm resistor. Do not skimp on the power supply for the ESP8266. It requires quite a bit of current, and lack of sufficient current will cause the ESP8266 to appear flakey or not work at all.

When I received my ESP8266 modules in the mail, I was anxious to try them out but I didn't yet have the required USB-to-TTL 3.3V serial interface cable to proceed. Since necessity is the mother of invention and since I am not known for being a patient person, I decided to use an Arduino Uno board I had for this purpose. Note, I removed the processor from the Uno as it was not needed.

The breadboard is shown in Photo 4 and the Fritzing schematic is in Figure 1. 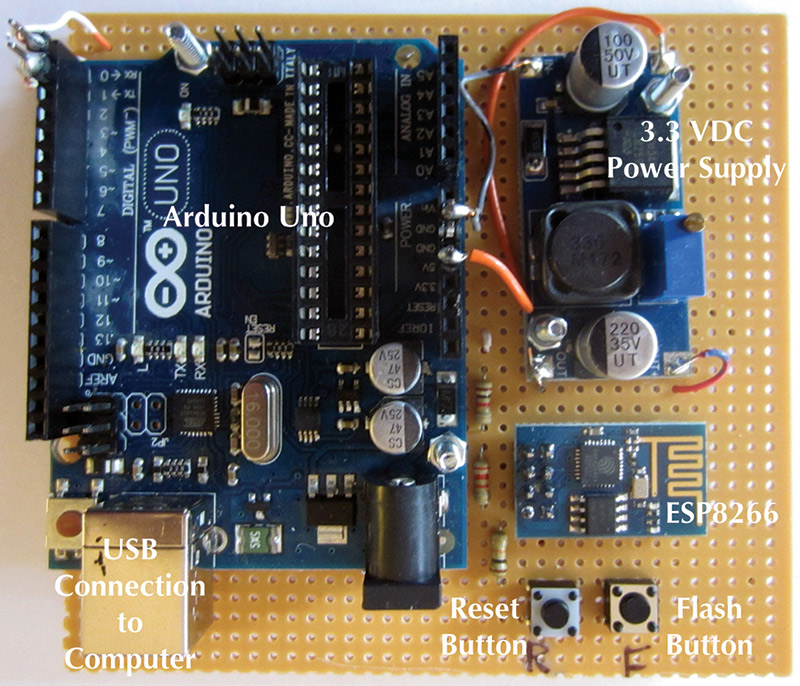 PHOTO 4. Prototyping hardware using an Arduino Uno. This method is not recommended, but works. 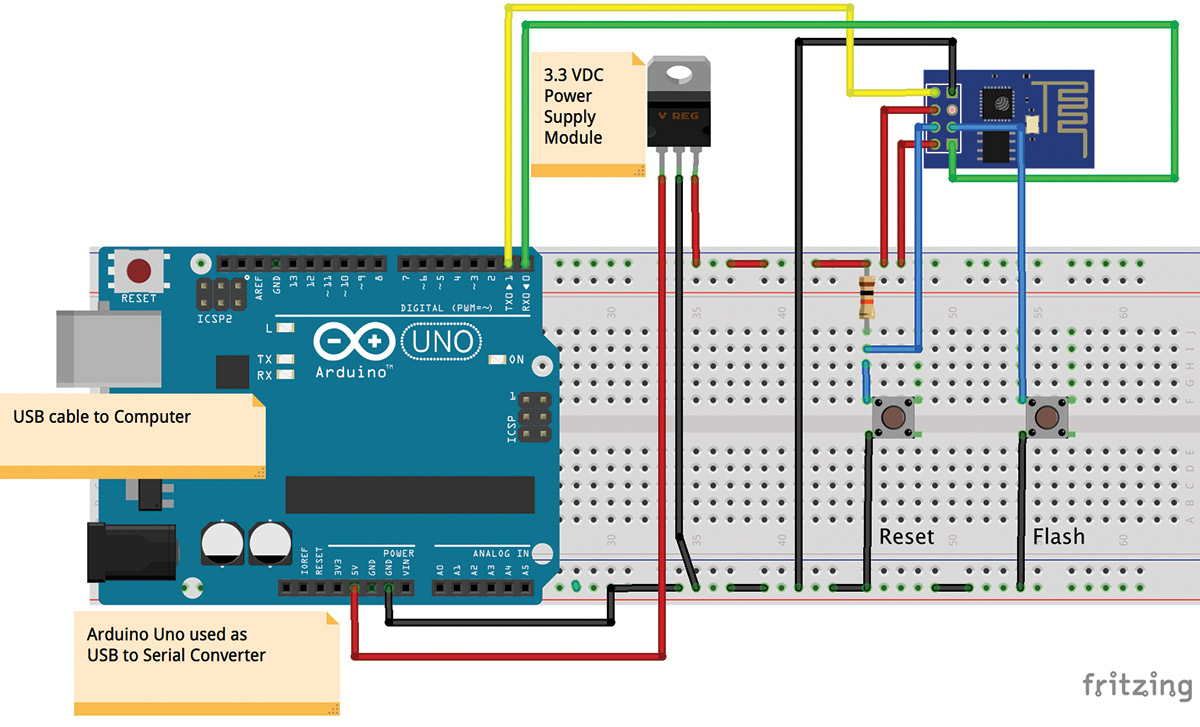 Here, the 5V output of the Uno was used to drive a small switching mode power supply set to 3.3 VDC which, in turn, drives the ESP8266. The Tx and Rx signal from the Uno were connected directly to the Tx and Rx connections on the ESP8266. Yes, Tx to Tx and Rx to Rx. Remember, the ESP8266 is a 3.3V part and that direct connection to the 5V logic levels of the Uno should be avoided. With that being said, this prototype worked perfectly. I have since heard the ESP8266 has 5V tolerant pins but I have yet to have that claim substantiated. Anyway, I figured I only had a few bucks tied up in the ESP8266 part so if it blew, oh well. As it turned out, this prototype worked splendidly.

The Reset pushbutton on the prototype pulls the reset pin on the ESP8266 low, thereby resetting the device. The Flash pushbutton grounds the GPIO0 pin which places the ESP8266 into firmware download mode. The CH_PD line must be pulled high for new firmware to be downloaded.

After my 3.3V USB-to-TTL serial cable arrived, I removed the Uno from the prototype and connected the cable directly to the ESP8266. This approach is shown in Photo 5 and the schematic in Figure 2. 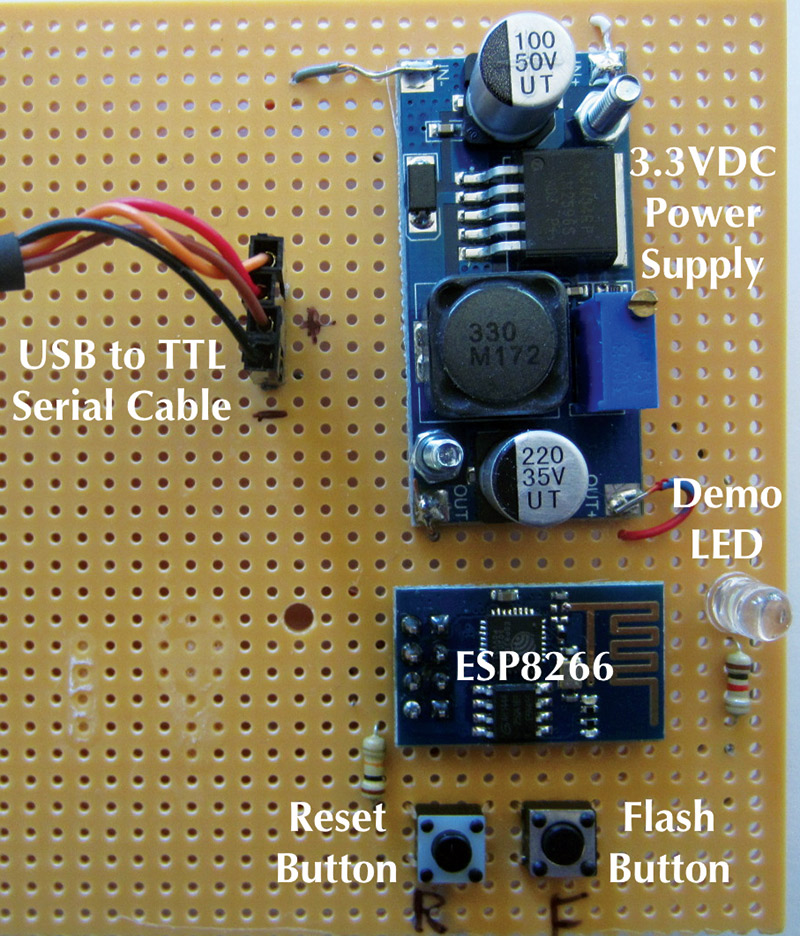 In either case, the following series of steps must be followed to initiate successful loading of code from the Arduino IDE into the ESP8266 module:

Once code is successfully uploaded to the ESP8266, it will be executed every time a power-up or a reset occurs.

To easily program the ESP8266 as an Arduino, you must use the latest version of the Arduino IDE. As of this writing, that is version 1.6.4. This version has a feature called the board manager which lets third-party vendors add support for their Arduino compatibles that the makers of the IDE don't support directly. Adding support for the ESP8266 is a multi-step process:

Once this process has been completed, the next time you click the Tools menu and then the Board entry you should be able to select the “Generic ESP8266 Module.” You are now ready to program your ESP8266 as an Arduino. Be sure you make this selection for all of your projects which utilize the ESP8266 module.

In addition, make sure you have a serial port selected in the IDE so the serial monitor can be used. If an appropriate serial port does not show up in the IDE, you may have to install a driver for the USB serial cable you are trying to use.

With either variety of prototyping hardware in place and the Arduino IDE updated with ESP8266 support, you are now ready to go. Right out of the box you have access to numerous example programs which illustrate some of the ESP8266 module’s capabilities. If you go to File and then Examples in the IDE, you will see these three categories of example programs:

Each of these have one or more example sketches within them. In the ESP8266WiFi category, the following sketches are of special interest:

You may be wondering how much of the Arduino software environment has been ported to the ESP8266 and, in truth, the answer is quite a lot. A list of what is working is available at https://github.com/esp8266/Arduino. This list is definitive as these are the people who did/are doing the Arduino port.

Using the ESP8266 to control an LED or some other device on your local area wireless network is cool but somewhat limiting. What if you want to control your device from anywhere in the world instead? There are multiple ways of doing this — some of which require configuring your modem/router to forward messages through your firewall, opening up the possibility of security breeches. Nathan Kennedy of Kennedy Technology has come up with a better idea that he calls Teleduino.

Teleduino is designed primarily for use with an Arduino with a wired Ethernet shield; there are versions available for Uno and Mega based boards. I was interested to see if I could port some of the Teleduino functionality onto the ESP8266 as an experiment, and with Nathan's help I did so. Go to www.teleduino.org for the details. If you are interested in the full Teleduino functionality on the ESP8266, you will have to wait for Nathan to port the complete code base. If, however, you want to experiment yourself, you can grab my code (TeleduinoClient.ino) from the downloads.

To use the Teleduino code, you must first go to www.teleduino.org/tools/request-key and request an API key. A key will be emailed to you after you provide your name and email address. A key is a long string of hex characters which must be edited into the TeleduinoClient sketch along with your Wi-Fi network’s SSID and password before downloading into the ESP8266. The API key must also be used in all API calls from your browser.

Once the sketch is downloaded into the ESP8266, it will first make a connection to your Wi-Fi network and then it will open a TCP connection to the Teleduino server. Once this connection is made, the ESP8266 will authenticate itself to the server by providing the API key. If you bring up the serial monitor, you will be able to watch this interaction take place.

As mentioned, I ported only a (very small) subset of Teleduino functionality. In fact, the TeleduinoClient sketch only recognizes a setDigitalOutput API call, but that is enough to prove the concept workable. On the second prototype shown in Photo 5, I have connected an LED to the ESP8266's GPIO2 pin through a 1K ohm resistor to ground. If I go to my browser and type in (this rather long URL) https://us01.proxy.teleduino.org/api/1.0/328.php?k=<YOUR KEY GOES HERE>&r=setDigitalOutput&pin=2&output=1&expire_time=0&save=0, the LED will turn on. If I try this again but change output=0, the LED will turn off.

Keep in mind that for this demo, the ESP8266 is turning an LED off and on by way of commands entered into a browser which can be located anywhere in the world. If instead of an LED connected to the ESP8266 you connected a solid-state relay (SSR), you could control devices such as a light, a heater, an alarm system, etc. The possibilities are endless.

Want to control your Teleduino device from your Android smartphone or tablet? Check out apps like Teleduino Controller Pro V2 in the Google Play store.

This article doesn't begin to describe the cool things that can be done using the ESP8266. I hope after reading this article you will come up with many ideas for your own projects. I have a few in mind that I may share in future articles if there is enough interest. Please let Nuts & Volts know if you would like other articles about using the ESP8266.

Devices like the ESP8266 make possible the idea of connecting almost anything to the Internet and controlling and/or monitoring them from anywhere in the world. The ESP8266 is a giant step forward in the Internet of Things (IoT) revolution.  NV

Information about the ESP8266 Arduino port can be found at
https://github.com/esp8266/Arduino

An ESP8266 forum full of useful information can be found at
www.esp8266.com

The Espressif forum is available at
http://bbs.espressif.com

The Teleduino client sketch (TeleduinoClient.ino) is available below, in the downloads.