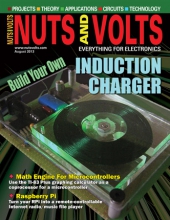 Build Your Own Induction Charger

A Mathematics Engine For Microcontrollers

Even though microcontrollers are magical, their math skills sometimes leave something to be desired. Let's find out how to connect a microcontroller to the TI-83 Plus graphing calculator for use as a coprocessor to help figure out some of the tougher equations.


Build Your Own Induction Charger

Borrowing from the concept of wireless chargers now on the market, you can build your own DIY version to power your projects and learn about inductive charging in the process!

Listen to Internet radio stations or play artists, albums, or individual songs from a Flash drive plugged into your Raspberry Pi.

TechKnowledgey
by Jeff Eckert
Events, Advances, and News (8.2013)
Yes, Virginia, there is a monopole; is it an AIO or tablet; dippers for tippers; and a bill that’s been introduced to protect electronic privacy are just some of the topics covered.

PICAXE Primer
by Ron Hackett
Have A Piece Of PICAXE Pi
Begin exploring the possibilites of interfacing PICAXE processors to the Raspberry Pi, starting with a simple stripboard circuit that will allow easy access to several of the Pi’s GPIO pins.

Q&A
by Russell Kincaid
Reader Questions Answered Here
An ampere-hour meter, a cat alarm, and a two-way intercom are discussed.

The Design Cycle
by Fred Eady
Score Big With The Lemos LMZ ZigBee Module
ZigBee networks can cost upwards of $7,000 to roll your own custom embedded ZigBee radio application. See how to get an embedded ZigBee application on the air with just a microcontroller, an inexpensive radio, and some simple C code for way less.

Open Communication
by Louis E. Frenzel
Connected Cars Communicate
Telematics is the wireless technology that connects your car to the outside world ... and it is hot! Here’s a summary of this emerging technology.