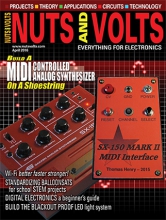 Build A MIDI Controlled Synthesizer On A Shoestring

The Beginner’s Guide to Digital Electronics

Learn how the numbers “1” and “0” changed the world of analog and digital electronics.


A MIDI Controlled Analog Synthesizer on a Shoestring

Build a MIDI controlled analog synthesizer for under $40 and start making electronic music right away.

PICAXE Primer
by Ron Hackett
Controlling an Electric BBQ Smoker — Part 1
As I mentioned at the end of the February Primer, we're now going to turn our attention to using a thermocouple sensor and a solid-state relay (SSR) to monitor and control the temperature of an electric smoker.

The Design Cycle
by Fred Eady
Basic Training for All Programming Languages
Test driving the new M.E. Labs trainer. Everything you need to enhance your coding skills is included!

Open Communication
by Louis E. Frenzel
So, You Think You Know Wi-Fi
Wi-Fi is just about the most widely used wireless technology in the world. However, there is a lot you may not know about Wi-Fi. Here is a primer to bring you up to date.

Indestructibles: The Lure of Tube Audio Equipment
by Bryan Bergeron
My Sony integrated amp with copper chassis and huge toroidal transformers was a tour de force in my audio setup before the power mains took an indirect lightning hit. Because the microcontroller was fried, I couldn’t even get the unit to power up.