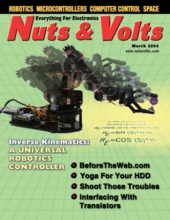 CONTROL YOUR DEVICES FROM A WEBPAGE

Of all of the millions of pages on the web, most are hosted by large servers or, at minimum, desktop PCs, but these aren't the only computers that can function as web servers. Even very small devices can serve web pages on request, including pages that display real-time information and respond to user input. The pages can either be available within a local network or an Internet connection can be added to make the pages available to anyone on the Internet.

My son, Tim, asked me, “Hey, Dad, can you make something like I saw at Comdex?" He had just come home from a computer-oriented seminar and wanted to find out if we could make the heads on a defective hard drive rattle back and forth for Show and Tell — silly question. His older sister, Joy, had asked about a louder metronome. His younger sister, Robbi, had asked about a violin-tuner. Joy now has a loud metronome and Robbi has a tuner (Nuts & Volts, November 1999). ..

If you work with digital or analog oscillators, at some point you will want to double-check their operating frequency. Analog oscilloscopes will only get you within a half-order of magnitude or so; a good frequency counter will take you the rest of the way.

I am sure that everyone has the experience of being surprised by an unexpected message on occasion. It could be a declaration of love on a giant stadium screen, a greeting left behind by a plane, or a commercial sign beside the highway. Wouldn't it be nice to be able to deliver a personal message to impress your friends when they least expect it? Here is a simple gadget that enables you to wave your personal messages in glow-in-the-dark words, pictures, or both.

In The Trenches
by Gerard Fonte
IN THE TRENCHES
Much of a design engineer's time is spent making things that aren't working work. Often times, this can be a real challenge, especially if the design steps (circuit design, board layout, assembly, etc.) are performed by different people. The engineer must determine not only the problem with the product, but also which design step is faulty and how to correct it. This month, we'll look at some approaches that can help in such situations.

Let’s Get Technical
by James Antonakos
LET’S GET TECHNICAL
This month, I will show the details behind the transmitter and receiver circuits and explain how a software protocol is used to transmit eight bits of data.

Micro Memories
by Edward B. Driscoll, Jr.
MICRO MEMORIES
In 1978, the Internet existed, but it was still largely restricted to universities and the military (and still called Arpanet.) It was only a year before that Hayes had released the first modem for PCs. While CompuServe (see the October 2003 “Micro Memories”) and the Source were positioning themselves as national online services, Ward Christianson and Randy Suess of Chicago had another idea for connecting groups of users to computers: the bulletin board systems or BBS.

Near Space
by L. Paul Verhage
NEAR SPACE
This month's article discusses some of the benefits gained through beginning your own program and explains how you can build an inexpensive near spacecraft and use it in an amateur science project. Talk about an awesome science fair project!

Personal Robotics
by Mike Keesling
Universal Robotics Controller
Very often, in our quest for functionality, we stray away from our processor of choice when we need a feature that just isn't found in our magic bag of tricks. Often times, we are forced to look in directions we wouldn't normally consider.