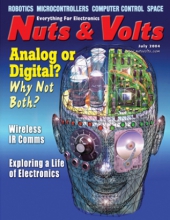 Yes — an irksome PIC trade off between cost and programming difficulties has existed. Bare PICs — such as the popular PIC16F84 (itself now obsolete) — are cheap and powerful, but too complicated for many enthusiasts and educators.


ROY NORMAN: FROM THE A-BOMB TO THE ENTERPRISE

It served him well with the US Navy; by 1948, he had already served for seven years. He was stationed in Guam, working his way up to the rank of petty officer first class, “getting rid of electronics equipment by throwing it over a cliff,” when he got his orders to report to Sandia Base in Albuquerque, NM.

“You can tell the difference between a professional and an amateur by the tools they use,” or so the saying goes, but even pros have a limited budget. So, you only buy the tools as you need them. Sometimes, you only need a tool for a short period of time or just for one project. So, when you need a specialty tool, do you rent, borrow, or buy? If you need a full set of features, it might be cheaper to lease the equipment. Alternatively, you might want to buy an inexpensive device if it satisfies


Microcontrollers Are Great — But Don’t Pass Up Conventional Electronics

Not every application needs a microcontroller, yet often times they're used in a project unnecessarily.

The simple circuit described in this article allows your digital meter to be self-powered from the same voltage it measures. This sounds simple and straightforward, right? Unfortunately, it is not.

Last month, we examined two designs for building the Enigma Machine. We saw that it is a device that produces pulses of 1200 volts at a rate of a few Hertz to a couple of hundred Hertz. Because the high voltage is completely isolated from the outside, no significant current flows. Therefore, it’s safe to play with. This month, we’ll look closely at the vibration effect, as well as experiment with other properties of high voltage.

Use a multimeter to insure you have enough wire before an installation.

In The Trenches
by Gerard Fonte
IN THE TRENCHES
A Printed Circuit Board (PCB) is more than just traces that connect components together. It is an integral part of any design. A good PCB design is one that you never notice. A bad design can cause headaches for years.

Just for Starters
by Mark Balch
JUST FOR STARTERS
Getting started on a new design isn’t easy when you have trouble figuring out what types of circuits are necessary to implement the project’s requirements. Last month’s article discussed how to decompose high level requirements into a set of architectural building blocks and then presented analog and digital implementations of a basic LED blinking circuit.

Micro Memories
by Edward B. Driscoll, Jr.
MICRO MEMORIES
Every industry has its own trade show. For consumer electronics, it’s CES in Las Vegas, NV, for computers, it’s Comdex, and for the music instrument industry, it’s NAMM — short for North American Music Merchants.

Near Space
by L. Paul Verhage
NEAR SPACE
By using a photocell (CdS) as one element in a voltage divider, you can construct a simple light sensor. Because it uses a photocell, the light sensor’s spectral sensitivity is very similar to that of the human eye. After you finish reading about how to build this light sensor for your HOBO data logger, I’ll explain a very interesting finding about designing voltage divider-based sensors.

Personal Robotics
by Mike Keesling
PERSONAL ROBOTICS
It sounds easy, but — for many of us — it is a major mental block. We dream and hope, yet cannot achieve. I go through the same thing when it comes to programming or writing, but the difference is, you can easily destroy something if you build it improperly, but playing with words and code is like playing with vapor. Like the old saying, “but words will never hurt me,” code doesn’t break like physical things do.

Stamp Applications
by Jon Williams
STAMP APPLICATIONS
If you ask my close friends, they’ll tell you that I’m as stubborn as a mule, yet I maintain the right to be human; therefore, the right to be wrong. I’d like to think that, when I am wrong, I admit it — I try, anyway.