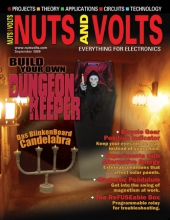 Build Your Own Dungeon Keeper

This time, we’ll use these same microcontroller circuits and code to illustrate three primary conditions that affect solar panel operation in the real world: heat, shading, and tilt angle.

Here’s a really fun project that will get a lot of attention. It’s an electronic pendulum that operates on the principle of magnetism.

Here’s a couple of simple circuits to tell you what gear your bicycle is in while you’re pedaling down the road. I usually check what gear I am in by looking down at the front and rear gears. I decided I needed a better way after I bought a good road bike with 30 (!) gear combinations (three gears in front and 10 in back).

This project was built for field troubleshooting and replaces blown fuses until the problem is solved. By dialing in the amperage, you can preset the drop-out point in the place of a fuse (200 mA – 5 amps). It is also known as a programmable relay. It displays the active AC or DC amperage being drawn when in the circuit.

Getting Started With PICS
by Chuck Hellebuyck
Programming the PICDEM 2 Plus Development Board
After getting everything set up — I used an MPLAB® ICD 2 for the programming tool because it is available bundled with the PICDEM 2 Plus board — I was ready to write some code.

Near Space
by L. Paul Verhage
Near Space | September 2009
I’m always on the look-out for neat stuff to do. So, when Mike Manes of EOSS posted over the GPSL* email list that Harbor Freight had discounted a vacuum pump that might be suitable for near space testing, I couldn’t resist. My creation takes near space testing to new lows and represents a unique use for an air-tight flour container that the manufacturer surely hadn’t intended.

The Spin Zone
by Jon Williams
LCDs & Things
It must have been 1994 when I discovered how much I enjoy character LCDs. Like so many others, I got started thanks to Scott Edwards and his articles here in Nuts & Volts.

The Design Cycle
by Fred Eady
USB To Ethernet Using Microchip’s Free Stacks: Part 2
Now that we’ve had a taste of the free Microchip TCP/IP and USB stacks, it’s time to put the chocolate in the peanut butter. As promised, this month we’ll put a Microchip PIC18F14K50 Low Pin Count USB microcontroller in front of a PIC18F67J60 Ethernet microcontroller and put another RS-232 converter IC out to pasture.

Personal Robotics
by Vern Graner
The Dungeon Keeper
So, how about we make an animatronic body for our talking skull and put him in a creepy coffin so he can beckon them forward with a flickering candle? Though this may sound like a pretty big project, it's actually rather straight-forward and, if you start now, you should be able to have your own Dungeon Keeper ready to thrill the kids and wow the parents for this Halloween!