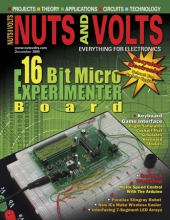 Ready to move up to 16-bit stuff? Well, we've got the perfect Experimenter for you, along with some cool applications to get your feet wet.

Combine a used cat food can, a 25-year old CMOS chip, and a handful of components, and you too can make your neighborhood school buses safer!

Simulate keyboard strokes using inputs on a microcontroller to fly your (simulated) place.

Learn the fundamentals of renewable energy through this educational series. This month: Experimenting with the Double Wide Sun Tracker.

The Design Cycle
by Fred Eady
Find the HIDden virtues of USB
While we were extolling the virtues of USB as an RS-232 killer, we were totally ignoring one of USB’s greatest strengths: the HID class.

Open Communication
by Louis E. Frenzel
New Integrated Circuits Make Wireless Easier
The one thing that has made wireless so easy to implement everywhere is the integrated circuit. The single chip radio transceiver is a common device and it is available in many forms to give us the huge number of communications options we have today.