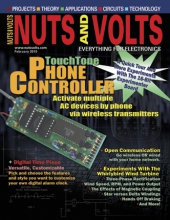 A Quick Tour of the 16-Bit Micro Experimenter Module

There's a lot of cool stuff to be done with the Experimenter board we introduced to you a couple months ago. So, let's take a look at several of the important subsystems and apply some working applications.

Who says you can't control time? This project gives you lots of features and styles to choose from so you can customize your timepiece to your heart's content.

Learn the fundamentals of renewable energy through this educational series. This month: Experimenting with the Whirlybird Wind Turbine.

TechKnowledgey
by Jeff Eckert
TechKnowledgey 2010
Topics covered include the destruction of the universde, Mac upgrades, a three-axis gyroscope in a single package, plus some other stuff you'll find interesting.

Q&A
by Russell Kincaid
Q & A
A Count down timer, large clock, plus more.

Good Things Come With Small Packages
by Bryan Bergeron
A good friend drops by your place and, knowing that you’re an electronics enthusiast, asks for help with a new handheld gadget that suddenly stopped working.