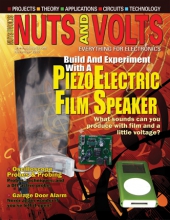 Build and Experiment with a PiezoElectric Film Speaker

Do you get erratic results with your oscilloscope? As you start probing higher and higher frequencies, do the results get increasingly odder. Let's address the reasons for that strange behavior and construct an Active Probe for about $25.

Experiment with this unique piezoelectric material to see what kind of audio sounds you can produce with film and a little voltage.


Is Your Garage Door Open?

You’ll never have to wonder again with this handy device.

The Spin Zone
by Jon Williams
Lighting Up the Season — Again!
I like this time of year. The air is clear (even in Los Angeles!), the mornings are crisp, and the evenings are brightened with holiday decorations that illuminate the insides and outsides of homes everywhere. My home is somewhat small, so my lighting projects are, too. Small doesn't make me wimpy, though, and my little 12-channel lighting board for the Propeller Platform is designed to be tough enough for applications that go way beyond LEDs.

The Design Cycle
by Fred Eady
A Universal Micro Design
When I’m not writing, I’m soldering. With that, I figure most of you are not looking down the sights of a soldering iron as much as I am. So, instead of subjecting you to soldering up my SERVO-inspired experimental micro-SD card interface, I decided to design a simple and super-low-cost microSD interface card that you can build on your bench.

Near Space
by L. Paul Verhage
The Canon Hacker Development Kit — Part 2.
Last time, this column introduced CHDK and how to load it on a camera’s SD card. Locking the SD card makes it bootable on a Canon camera and that allows you to write simple scripts that automate features of Canons that aren’t otherwise available.This month’s column discusses the syntax of the uBasic scripting language so you can begin writing your own scripts.The next article will cover when I gave a NearSys BalloonSat flight computer control of a Canon camera running a remote script.