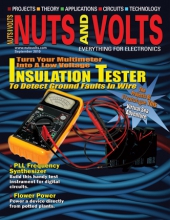 The Projects of Prototype This!

Joe Grand takes a closer look at the electronic aspects of his different builds from the popular Discovery Channel show Prototype This! This month, go deep with a virtual sea adventure.

This project describes how to build a frequency synthesizer — a device which generates a stable waveform at a user-selected frequency. Frequency synthesizers are handy test instruments for digital circuits, and can also be used for audio signal generators or radio frequency mixing applications. This project is easy to build, easy to use, and a great way to learn more about how phase-locked loops work.

You too can power a device from a set of potted plants! However, in this case, the cells of the battery draw their energy directly from the plants, rather than from an electrochemical process.

TechKnowledgey
by Jeff Eckert
TechKnowledgey 2010
The return of the Nixie, molecular bot walks and decides, IBM tweaks Microsoft, laser generates bursts of nothing, plus other stuff you’ll find interesting.

The Spin Zone
by Jon Williams
The Joy of Joysticks
The first joysticks, of course, were simply made up of switches pressed by a plate connected to the stick.Then came analog joysticks which were built up with two potentiometers mechanically linked at a 90-degree angle; one pot for each axis. The original PC joysticks were easy to connect to microcontrollers without hacking. With the proliferation of USB ports, though, analog joysticks changed their interface and are no longer microcontroller-friendly. Darn ...

The Design Cycle
by Fred Eady
Gettin’ Jiggy with the Vinculum-II Hardware Design
Heat up your soldering iron. It’s time to forge some solder, silicon, ceramics, plastic, metal, and fiberglass into an electronic instrument capable of transferring our ideas to a piece of silicon we know as the FTDI Vinculum-II. The first order of business is to pick up where we left off last month.

Near Space
by L. Paul Verhage
The Canon Hacker Development Kit
A simple script can give a Canon camera its own intervalometer while more complex programs allow a camera to vary settings like zoom, f-stop, shutter speed, and exposure time while it’s taking pictures. A big thanks goes to Mark Conner and the folks on the GPSL Yahoo! groups for making me aware of this fantastic camera system.