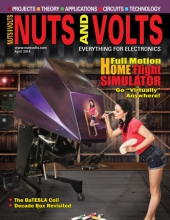 Go “virtually” anywhere with your own homebrew flight simulator.

Graphical plotting, data acquisition, and control software for your microcontroller.

How would of Nikola Tesla have designed his famous coil if he had been able to access modern day electronic parts? Here’s one idea.

While originally created for a specific purpose, this basic “notification” circuit can be implemented in many different applications.

Decade boxes allow users to dial in precise amounts of electrical resistance to be inserted into a circuit they’re designing. Original boxes had faceplates with the values printed on them, but extra math was always involved. Here’s a handy update to that reliable piece of equipment.

PICAXE Primer
by Ron Hackett
PICAXE-Pi Communications — Part 2
We’ll continue with our PICAXE-Pi communications experiments, and cover the basic techniques that can be used to send a PICAXE ADC reading to the Pi from any analog sensor we choose.

Open Communication
by Louis E. Frenzel
Software-Defined Radios Everywhere.
Virtually all radios today — cell phones and Wi-Fi WLAN, for example — are software-defined radios. Find out exactly what SDRs are and how they work.

Smiley’s Workshop
by Joe Pardue
The Arduino Classroom. Arduino 101/Chapter 4: Digital Input ... Pushbuttons.
Learn how to design circuits with pushbuttons and how to utilize them to get your system to take action when they are pressed (or not).

The Design Cycle
by Fred Eady
Total Eclipse of the Cross Compiler
The BeagleBone Black and Raspberry Pi are different in many ways. They are also alike in many ways. However, when it comes to programming them, the equalizer appears in the form of a Linux-based GNU cross compiler toolchain running under the umbrella of an Eclipse IDE.

A MAKER’S DOZEN: Designing Around Failure
by Bryan Bergeron
When it comes to DIY, it's not really a "failure rate" but a learning opportunity.