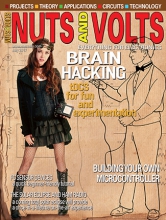 Here’s a quick beginner-friendly tutorial that shows you how to interface and read data with the popular serial protocol, I2C.


Building Your Own Microcontroller

Build an Adaptable Controller for Your Near Space BALOONING MISSIONS, Part 2

Build a flight controller that can be used in near space ballooning projects. Up next, the software.

Build on previous ESP8266 projects to add a customizable world clock to your arsenal of time keepers.

The Spin Zone
by Jon McPhalen
A Block On the Old Chip
BlocklyProp is a fun and easy way to build a Propeller program — piece by piece — using blocks.

The Ham’s Wireless Workbench
by H. Ward Silver
The Solar Eclipse and Ham Radio
Getting ready to follow the on-air activity that will come this August 2017 when we have a total eclipse of the sun.

The Design Cycle
by Fred Eady
Put on a PiFace
Working with PiFace and a RAD tool called B4J.

What’s in Your Grab-and-Go?
by Bryan Bergeron
What’s in your “grab-and-go” bag when you get phone calls for help on a friend’s electronic equipment?