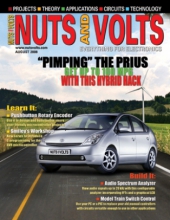 How To Use The Pushbutton Rotary Encoder

This is a project I wanted to do many years ago when I was spending a lot of time and money on my model railroad. I was disappointed by the big, clunky electrical controllers which operated the track switches, and I wanted to have something smaller and more elegant to do the job. A computer control system would have been ideal, but I never got around to designing one. Many years and several designs later, I have come up with two versions of the control system: one PC-based and one PIC-based...

Getting Started With PICS
by Ron Hackett
Getting Started with the PICAXE-28X1 Microcontroller
In essence, the PICAXE-28X1 is like a 28X on steroids. It’s pin-for-pin compatible with the 28X and all the 28X commands will function correctly on a 28X1. In other words, if you have an existing 28X circuit, it will function exactly the same with a 28X1 installed. This is a good thing, because Revolution Education considers the 28X to be obsolete and has discontinued it. Amazingly, the new 28X1 is about the same price as the old 28X...

Personal Robotics
by Vern Graner
DORKBOT People Doing Weird Things With Electricity
So, you’ve been working on your electronic masterpiece for a few weeks (months?) and it’s finally finished, so ... now what? Where can you go to show off your little beauty, the child of your imagination, the fruits of your labor? How about Dorkbot?

Open Communication
by Louis E. Frenzel
Ten Things You May Not Know About Bluetooth
Bluetooth is a very familiar name these days if you have a cell phone or laptop. It is a wireless technology that has been around a while and probably can be credited as the start of a whole boat load of short-range wireless technologies. But even if you have heard the name, you may not really know all about it. Here are 10 facts that will update your knowledge of this hot wireless method...

The Design Cycle
by Fred Eady
Up The Logic Food Chain
I was a totally analog teenager. My interests then were centered on tube-based stereo equipment and tube-based guitar amplifiers. I was fat, dumb, and happily analog until I ran across a copy of the GE Transistor manual in the literature section of a local electronics parts store. I had to have it. Everything “electronic” I was reading about at the time was telling me that vacuum tubes were on their way out and transistors were the thing of the future. At that time, hand-held calculators were b