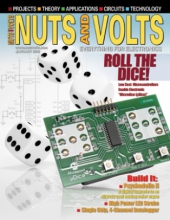 A few months back, one of the engineers at Microchip came up with a simple little design using a low-cost, Baseline PIC16F57 microcontroller (MCU). The idea used inexpensive parts such as LEDs and pushbuttons to create an electronic dice board, which the engineer nicknamed microdice, or “µDice.” A basic concept was used for the design — push a button and a value between 1 and 6 is displayed on seven LEDs connected to one of the ports.

Start to finish instructions on how to build your own power supply - Part 2.

Shed some new light on your next strobe circuit application.

Never be left in the dark again with this reliable circuit.

A simple data logging circuit for many applications.

In The Spotlight
by Marvin Mallon
An Interview With Gary Johnston
Managing Director, Jaycar Electronics

Stamp Applications
by Jon Williams
The Power Of Networking
For an actor attempting to make his way in Hollywood, the word “networking” takes on a whole host of meanings. It’s a crazy business, really, and what most of us find is that those with the same goals, e.g., becoming an established actor, are not abundantly helpful to each other (a few are downright malicious). So, “networking” — actor to actor, that is — is mostly bupkis in my book. Now, I do have a “Hollywood” network, but the only actors in it are very well established, if not particularly...

Getting Started With PICS
by Chuck Hellebuyck
PICKIT™ 2 Command-Line Option
I have good news for all the users of Microchip Technology’s PICkit 2 programmer who want to use it with an Integrated Development Environment (IDE) other than Microchip’s MPLAB® IDE. Microchip has released a DOS command-line option for the PICkit 2, and I’ve successfully used it with the MicroCode Studio IDE from Mecanique ([url=http://www.mecanique.co.uk]http://www.mecanique.co.uk[/url]) and microEngineering Labs’ PICBASIC PRO™ sample version ([url=http://www.microengineeringlabs.com]http://www.microengineeringlabs.com[/url])...

Personal Robotics
by Vern Graner
Robo Spin Art
The venerable spin art machines popularized in the 1960s and 1970s created funky, psychedelic artwork many of us remember from the carnivals and county fairs of our youth. Simply put, “spin art” is created when paint is dropped on to a rotating paper, allowing centrifugal force to make streaks of color. The RoboSpinArt machine updates this concept by making spin art attractive to the so-called “joystick generation” of today while also adding on features to the original design.

The Design Cycle
by Fred Eady
Managing The Real World
No matter how powerful a microcontroller may claim to be, a microcontroller by itself cannot do everything in a real-world, I/O-oriented embedded system. For instance, I don’t know of any microcontroller that can directly drive a one ampere resistive or inductive load directly from one of its I/O pins. That means if you’re working on putting together a microcontroller-based system that will interface to motors and relays, a great deal of your design time will be expended on the I/O interface...

Near Space
by L. Paul Verhage
Near Space Applications Using The PICAXE Microcontroller (Part 2)
The PICAXE-08 is a great microcontroller for small applications that don’t require a lot of I/O pins or memory. This month, we’ll look at two more small near space applications that are perfect for the PICAXE-08 and PICAXE-08M. The first is a programmable camera timer that replaces the standard 555 timer circuit used in most BalloonSats. The second is a cut down device that ensures the timely termination of a near space mission and the separation of the balloon’s fragments. So, let’s see what...