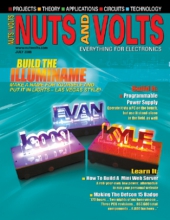 In thinking about conservation, it occurred to me that hosting my personal website on a desktop PC used a lot of energy. Even without a monitor, a desktop PC draws about 120W of power or about 200 KWH a year. So, I designed and built a low power alternative — Webster, the mini web server. There are many uses for Webster-like web servers including...

“170 hours ... Two nights of my honeymoon ... Three PCB revisions ... 863,600 total components ... 6,800 hackers ...” Every summer, thousands of hackers and computer security enthusiasts descend into Las Vegas for DEFCON ([url=http://www.defcon.org]http://www.defcon.org[/url]) — the largest and oldest continuously running event of its kind. It’s a mix of good guys, bad guys, government officials, and everyone in between, all focused on having fun, sharing technical information, seeing old friends, and learning new things...

Light Emitting Diodes — or LEDs — have fascinated me since I was a teenager. I have built many projects over the years with them, usually involving blinking or sequenced chase lights using 555 timers and 4017-decade counters. Over the past few years, both the intensity and available colors of commercial LEDs have drastically improved. This includes blue ones that, when combined with red and green LEDs, can make up a pixel of an RGB display..

The recent demise of my bench power supply — a project I built it back in 1987 — convinced me that it was now time to build a new one. The basic design of my original power supply was relatively straightforward; 1.5-15 volts DC, LM317 voltage regulator, adjustable via a potentiometer, and an analog panel meter to display voltage out. My basic power needs have changed very little since then...

Stamp Applications
by Jon Williams
Putting The Brakes To It
Even if you’ve never been to Los Angeles, chances are that you’ve heard of the 405 freeway. This infamous chunk of 10-lane hell extends from the San Fernando Valley south through the west side of Los Angeles, past LAX, and all the way down into Orange County where it reconnects with Interstate 5. The 405 spent some time in the news a few years ago for all the gun play associated with “road rage.” As a Los Angeleno who frequently travels the 405, I smile at everybody...

Near Space
by L. Paul Verhage
The Nearsys Flight Computer
My first near space flight computer transmitted all of its data to ground stations and recoded none of it onboard. As a result, I had a huge mission log to wade through and edit after each flight. It got so bad that it took longer to put the flight and science data into shape than it took to fly the mission. So this month, I’ll introduce you to the flight computer that I’m currently usingto operate my near spacecraft. It avoids these problems by transmitting only position reports to ground...

Getting Started With PICS
by Chuck Hellebuyck
Monitoring Input Signals
In this month’s column, I want to introduce a common topic involving sensing or measuring input signals. A wise, experienced engineer recently suggested I point out that all MCU projects involve three basic parts...

The Design Cycle
by Fred Eady
A Discerning Touch
I had the pleasure of taking last month’s Xilinx/Microchip capacitive touch sensing prototype hardware on the road to Abel Elementary School in Sarasota, FL. The occasion was Space Day, which is an annual space-science event sponsored by the Lockheed Martin Corporation. Over 150 fourth and fifth grade fingers touched the tin touch sensor, which was insulated by and tied down to a desk with a piece of cellophane tape I scarfed from a teacher’s desk. Thanks to a CleverScope and my Lenovo laptop...

Personal Robotics
by Vern Graner
Power Flowers
As I am still in the process of summarizing the great feedback I received from folks about the Habitat article, I’m not quite ready to publish Habitat for Hobbies Part 2. Instead, I’ve decided to take a different approach this month and present a simple robotic project that should be within the grasp of most electronic hobbyists. The idea is to create some neat moving effects using a single servo motor andsomething many of us have lurking in a cabinet in the kitchen...