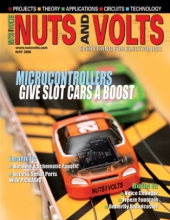 Microcontrollers Give Slot Cars A Boost

To experienced tinkerers and electronics gurus, they can be a clear treasure map that leads straight to the intellectual pot of gold that awaits at the end of a project. To novices, they can be a cryptic combination of symbols that might as well be a part of the Da Vinci code. I’m talking about schematics — those wonderfully symbolic diagrams that are supposed to help intrepid tinkerers wire up circuits and populate printed circuit boards (PCBs).

This month, I’ll show a companion PICBASIC PRO program for a PIC microcontroller. The program detects received commands, takes requested actions, and sends responses. I’ll also show how to use an RS-422 interface to create serial links as long as 4,000 feet.

Crystals That Make The World Go ‘Round

MP3 players are great when you are wearing earphones, but wouldn’t it be nice to listen through your home or car sound system? Now you can! Just plug your player into this project and it will broadcast the music to any nearby FM radio.

Build this voice changer circuit to make your voice sound like a Dalek from Dr Who.


Microcontrollers Give Slot Cars A Boost

Microcontrollers are used in many different applications — motor control being one of them. So why not put a motor on something fun, like a slot car? This article will show how to turn an 18 volt, brushed DC-motored slot car into a micro-controlled super car using the PIC12F683 microcontroller. We will give the car adjustable speed control (a throttle!!), brakes (Midas doesn’t make them that small), and the ability to read the track and know where all of the turns and straight-aways are....

An associate sent me a link to a cool video on the Internet that showed water droplets moving upward toward the spout. No, this wasn’t on Art Bell’s website and had nothing to do with Nikola Tesla, zero point energy, or the so-called Hutchison Effect. But it had everything to do with real science known as temporal aliasing a.k.a., the “stroboscopic effect.” Wikipedia explains a machine employed toward this visual phenomena as “... an instrument used to make a cyclically moving object appear...

Stamp Applications
by Jon Williams
More Surplus Success
I may have mentioned my friend Brian once or twice. Brian’s a great guy — a super smart IT professional by day and a bring-down-the house DJ by night. When I lived in Dallas, Brian was a tad jealous because I had Tanner (geek heaven) within minutes of my home. So, I move back to Los Angeles a couple years ago and no more Tanner for me (and I miss them). But, what do I have? That’s right! All Electronics — another gate into geek heaven. Brian was beside himself; what luck I have with my proximity

Personal Robotics
by Vern Graner
A Droid Of Your Own
Is it possible to buy a “kit” of R2-D2 parts and make your own full-sized replica R2-D2 droid? Nope. Is it possible to find a group of talented builders and crafters who are passionate about building droids and who will go to great lengths to help you create your own? You betcha!

Near Space
by L. Paul Verhage
2007 SPACEWARD GAMES (Part 2)
The Spaceward Foundation is an educational 501(c) (3) non-profit dedicated to the creation of the space elevator (see the March ‘08 issue of Nuts & Volts). But the Spaceward Games isn’t just about space elevators; it’s about developing the technology that will kick-start our migration into the solar system. This month, I want to conclude my report on the most recent Spaceward Games by describing the solar racing and ultra-strong materials competition — the other half of their challenge...

The Design Cycle
by Fred Eady
Building A CPLD Development Kit
Pour some distilled water on that dried up soldering tip cleaning sponge and fire up your soldering station. In this edition of Design Cycle, we are going to tie down that Xilinx XC2C64A CPLD you see in Photo 1 onto the ExpressPCB printed circuit board we’re beginning to put together in Screenshot 1...

Getting Started With PICS
by Chuck Hellebuyck
Getting Started With The PICBASIC™ Pro Compiler And MPLAB® IDE
Email feedback has made it clear that there are many who would like me to go back and cover how to get started, as the title of the column suggests. Though I’ve covered this in many previous columns, much has changed, and there are still some beginner topics I have not covered.