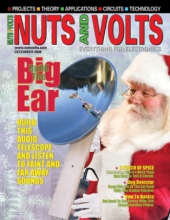 A Touch of Spice Part 1

There’s more than one way to create an electronic circuit and make it work. One powerful tool in particular is simulation previously onlyavailable to professionals). With simulation, you can accurately predict the circuit’s performance even before turning on your soldering iron!

Develop breadboarding methods and habits that work well for you.

Ever wish you could build an "audio telescope" that would let you hear things that were faint or far away? Well, this article shows you how to build such a thing. We call it the Big Ear.

We have several pets in our home, including two dogs. One of the problems we have is the dogs like to sneak into the kitchen and eat the cat’s food. My wife asked me if there was any way we could create some sort of detector that would chirp each time a dog entered the kitchen. Of course, I said yes...

This article describes two add-on automotive devices. One of these is not found in production cars (to the best of my knowledge), but will be of interest to anyone who seriously wants to know what goes on under the hood. The second device seems to be standard equipment on more and more cars, and — in my home state of New York, at least — insurance companies will give a discount for its use. Both of these circuits can easily and safely be installed in any car...

The Design Cycle
by Fred Eady
Avoiding Tuition At USB University
I have a love/hate relationship with USB. I love it because it is convenient and user friendly. I hate it because understanding the underlying processes of USB can be difficult. Think about this. You don’t have to know the down and dirty details of how a PIC ALU (Arithmetic Logic Unit) works to employ a PIC in a microcontroller-based application. So, why should we have to know so much about USB to put it to work for us?

Smiley’s Workshop
by Joe Pardue
Smiley’s Workshop 5: There are 10 types of people. Those who get binary and those who don’t.
Binary logic, bitwise operators, and more. Part 5

PICAXE Primer
by Ron Hackett
Experimenting With The IR Multi-Board
This month, we’re going to continue our exploration of PICAXE IR capabilities, which we have divided into three basic categories...

Open Communication
by Louis E. Frenzel
Six Things You Should Know About Wireless
Wireless started changing the world just after it was invented by guys like Marconi, Tesla, and others in the late 19th and early 20th centuries. And that change is still going on. Here are a few wireless developments maybe you didn’t know about.

To Solder or Not
by Bryan Bergeron
Don't let soldering crimp your style.