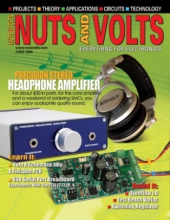 You may have noticed the demise of the old serial port King and its replacement by the USB usurper. If you have used the RS-232 serial port to work with embedded systems, you likely mourn the old King and tend to think of the new King (USB) as something of a tyrant — or at least very hard to figure out and use. But with the advent of USB-to-serial adapter ICs such as those from SiLabs and FTDI, we have something to celebrate...

Ever want to try SMD (surface-mount device) soldering without using a magnifying glass and super steady hands? Production houses use ovens which cost thousands, but it’s possible to do a reasonable job with a regular toaster oven. You just need to control it correctly. Enter the SparkFun Electronics Reflow Toaster Controller...


PCB Basics: From Your Brain To A Finished Board

If adding a variac to your test bench isn't in the budget, try building your own. This DIY unit may just fit the bill.

We’re all familiar with linear IC regulators, especially the three-pin TO-220 package types like the 7805 and the LM317. They’re inexpensive, and their low-noise andfast transient response make them ideal for many applications. Their one drawback is efficiency. For example, a 7805 regulator delivering one amp from an input of 12 volts will dissipate seven watts of heat while delivering five watts to the load. Plus, a large heatsink would be required to keep it cool enough to operate...

Starting at about $30 in parts for the core amplifier and a weekend of soldering surface-mount components, you can enjoy audiophile sound.

The Design Cycle
by Fred Eady
Firmware You Can Touch
I can remember as a kid I used to build simple little transistor circuits that would activate a relay when someone touched the doorknob to my room. My “DO NOT ENTER” adventures were far more exciting than the circuitry involved. As I recall, the base of the transistor was hung out to dry and connected to the doorknob with a loop of wire. When someone (my pesky little sister, for instance) injected noise into the transistor base via the doorknob, the transistor would turn on and pass current...

PICAXE Primer
by Ron Hackett
Good Intentions and “Faux” PC Boards
It’s funny how things sometimes get away from me. My original intention for this month’s column was to present an introduction to the many new and powerful features of the PICAXE-28X1 processor but, as I started to elaborate on the details of some of these features, it began to feel like information overload...

Open Communication
by Louis E. Frenzel
The 700 MHz Spectrum
If it weren’t for spectrum, there would be no wireless. The good news is that spectrum does exist. The bad news is that there is a finite amount of it. Spectrum is sort-of like real estate. There is only so much land on earth so it too is finite. When you use it all up, then what do you do?

Personal Robotics
by Vern Graner
Habitat For Hobbies (Part 1)
Just as most biological entities require A specific habitat to flourish, hobbies such as robotics and electronics need a place to live and grow. Specifically, the hobbyist workbench.

Finding Your Tone
by Bryan Bergeron
Most of the projects described in Nuts & Volts can be built with readily-available, relatively inexpensive components. However, when it comes to tube-based projects, it’s a different matter.