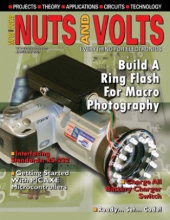 Getting Started With PICAXE Microcontrollers - Part 1

If you are relatively new to the world of programmable microcontrollers, the PICAXE line of processors is the perfect place to start.

These days, there are various common interfaces available. Choosing the best interface is not always trivial. Do you need an interface to store data or to control your robot?

In this installment of Control Your World, I am going to show you how simple it is to use a microcontroller in this quest for control. While the project may look very complicated, it has been presented in such a way that anyone with even the slightest soldering skills should be able to complete the project...

Even the cheapest lead-acid battery will cost between $20-$30 to replace, not to mention the hassle of yanking it out, installing the new one, and then explaining all of the battery-acid holes in your clothing to the wife.

I initially became involved in macro —or close-up photography— as part of my job, which involves failure mode analysis of electronic circuitry. Be sure and read the sidebar for a discussion of why photographs of small objects are called Macro photography. With components becoming smaller and smaller,taking a decent photograph has proven to be increasingly difficult...

Stamp Applications
by Jon Williams
Stamp Applications
Having been a part of the BASIC Stamp community since 1994, I’ve had the wonderfully-good fortune to meet a lot of experimenters, and — due to my exposure through Nuts & Volts and six years with Parallax — I’ve been asked to create a wide variety of projects. One of the most frequently requested, but that is not really practical with a BASIC Stamp, is a Pinewood Derby racing timer. Well, now that programming the SX is nearly as easy as programming the BASIC Stamp...

Near Space
by L. Paul Verhage
Near Space
This month, I have several topics to discuss. The nice thing about them all is that they can be expanded upon. So, expect to hear more about them in the coming months.

Personal Robotics
by Phil Davis
Personal Robotics - Part 1
Being an amateur roboticist, I am always looking for parts of varying kinds from which to build robots and, since most of the bots I like to construct are mobile, one of the major requirements are brushed DC motors.

Getting Started With PICS
by Chuck Hellebuyck
PIC12F675 Replaces The 555 Timer
If you have been fooling with electronics as long as I have, you will have seen a lot of changes throughout the years. I watched the birth of integrated circuits which led to op-amps and TTL or CMOS digital chips, and eventually to the microcontroller. Somewhere along the way, an eight-pin chip used by hobbyists all over the world was developed.