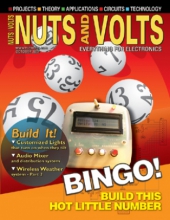 For some electronics hobbyists, the discrete Fourier transform, or DFT, is a feared and mysterious entity.

Part 1 gave you an overview of logic analyzer basics. Now, let's concentrate on actually using this instrument. We'll examine some of its limitations and its numerous, powerful features that make it so useful in the lab.


Digital TV — Ready or Not, Here it Comes!

February 17, 2009 — a date that may not live in infamy, but nevertheless will witness a monumental change in the US television broadcasting landscape...

The device described in this article is both a 4:1 audio mixer and a 1:4 distribution system. Each of the input and output channels has its own volume control...

In this installment of the wireless weather station, I am going to show you how to build the Indoor Weather Satellite. Once assembled, we will run some tests with our PC interface satellite as shown in the network diagram in Figure 1...

This project was inspired when I was playing BINGO with my friends. Somehow during play, the numbers that were called got mixed up, and there was confusion as to whether or not one of the players had actually won the game...

In The Spotlight
by Marvin Mallon
An Interview with Johan Smit
This month’s spotlight is on Electronics 123 whose headquarters is in Columbiana — a town of about 6,000 population located 78 miles southeast of Cleveland on the eastern edge of Ohio...

The Design Cycle
by Fred Eady
Peter Best Circles The Drain
Peter and I worked together on the EDTP Ethernet MINI C-to-PBP (PICBASIC PRO) conversion project that you have been reading about in this series of Design Cycle episodes...

Open Communication
by Louis E. Frenzel
HD Radio In Your Future?
I just finished testing Radiosophy’s new HD100 digital radio and was impressed enough to want to tell you about it. In case you are still in the dark about this radio technology, HD radio is the digital radio service that...

Personal Robotics
by Vern Graner
Evolution of the BoogieBot Mobile Platform
Music has been a big part of my life as far back as I can remember. I’ve played music in bands, composed and produced music, and (for a short time in the ‘80s) I even made my living playing in a rock band...

Getting Started With PICS
by Chuck Hellebuyck
PICkit™ 2 Starter KIT vs. PICkit 2 Debug Express
If you’ve been reading this column on a regular basis, you will — no doubt — have realized that I’m always on the lookout for a better and lower-cost starter package, or at least programming solution...

Developing Perspectives
by Bryan Bergeron
In this issue of Nuts & Volts, we’re fortunate to feature several excellent articles, including Jeff Mazur’s introduction to digital broadcasting and Paul Kafig’s discussion of thediscrete Fourier transform (DFT). Both topics represent sea changes in the evolution of electronics, but through very different mechanisms...