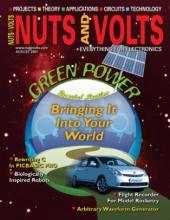 Green Power - Bringing It Into Your World

Are Hybrid Cars Here to Stay?

The hybrid car is not new — Ferdinand Porsche designed the series-hybrid vehicle in 1898. Called the Lohner-Porsche carriage, the hybrid function served as an electrical transmission rather than power boost...


An Introduction To Solar Electric For Your House

I’m so bright, I generate my own electricity ... I need a T-shirt and a bumper sticker with that saying! I was designing a base and space station power generation system for a moon/Mars colony group, when a co-worker asked me to help design...

These situations highlight some very important issues in the field of data storage and getting to the answers can require a variety of information across several areas of technology. However, understanding these topics can greatly help you prepare...

I moved out of the city years ago and now live in the country in an old farm house. We have three barns and suffer quite a bit of damage from the local mouse population. I have used several types of traps with varying amounts of success...

Amateur rocketry is a well established activity that is currently divided into two main categories: high-power and model...

There are many simple sine/square/triangle wave generators available to the hobbyist. But oftentimes, something more is needed when the commonly available waves just aren’t adequate. For these occasions, an arbitrary waveform generator is necessary...

This project is designed to maximize the output from your existing panel by turning it to keep it pointing at the sun, and (hopefully) making the purchase of another panel unnecessary...

When the controller for my solar water heating system died on a particularly cold night, and burst the pipes in the collector, it was time to design and build a new and improved version.

TechKnowledgey
by Jeff Eckert
Techknowledgey 2007
The diamond anvil cell (DAC) has been around since 1958, when it was invented by Weir, Van Valkenburg, Lippincott, and Bunting at what was then called the National Bureau of Standards...

In The Spotlight
by Marvin Mallon
An Interview with Paul True
The spotlight this month is on Linx Technology whose corporate headquarters is located in Merlin, OR, a small community northwest of Grants Pass. The privately owned company moved into this purpose-built facility in late 2006...

The Design Cycle
by Peter Best
Rewriting C In PICBasic Pro
The C programming language has grown like a creeping weed extending its branches and leaves out from the personal computer (PC) world and into the realm of the microcontroller...

Personal Robotics
by Bryan Bergeron
Biologically Inspired Robots
Developers of biologically inspired robots borrow from systems and methods found in nature with a goal of producing a more efficient, capable, or cost-effective robot than would be possible through traditional means...

Getting Started With PICS
by Chuck Hellebuyck
BasicATOM In-Circuit Debugger
If you’ve thought about getting started with PIC® microcontrollers (MCUs), you’ve probably seen the variety of available development tools, such as programmers, debuggers, and the Integrated Development Environments (IDEs)...

Open Communication
by Louis E. Frenzel
Cell Phones — 10 Pounds of Technology in a 5 oz Package
No other electronic product incorporates as much of the latest technology as a cell phone, and especially in such a small package...

Developing Perspectives
by Bryan Bergeron
As highlighted by several articles in this issue, green innovation — using energy efficient alternatives to fossil fuel and other methods of minimizing the release of carbon in the environment — has bubbled to the surface of our social consciousness. Increased gasoline prices at the pump, US military involvement in the Middle East, and maneuvering of political parties in preparation for the upcoming presidential election, have reinvigorated the green energy product and service industry..