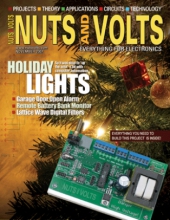 Here at Po’Man’s, our motto is “Why pay big bucks for expensive tools, when there might be a cheap way to get the job done?”

This article is a result of my investigation into LWDFs which were just too cool to pass up.

Everyone has heard the saying “necessity is the mother of invention.” Well, that is what gave birth to this project.

I have seen many simple garage door alarm circuits through the years, but this one is a little different in that it connects directly to popular lines of Genie garage door openers. While I use it with a model IS550, it should work with many other Genie models as well.

In this installment of the wireless weather station, I am going to show you how to build the outdoor weather satellite. Once assembled, we will run some tests with our indoor and PC interface satellites, as shown in the network diagram in Figure 1.

In recent years, more holiday lights have appeared in our neighborhood around Christmas. These are a combination of traditional strings and newer lawn displays, some with animation or inflated by electric fans, but all purchased from large retailers...

In The Spotlight
by Marvin Mallon
An Interview with Mark Walsh
This month’s spotlight is on MCM Electronics, a division of Premier Farnell. The multi-national organization is a publicly held company listed on the London Stock Exchange...

Stamp Applications
by Jon Williams
Dimming The Lights Fantastic
Lamp dimming — specifically 120 VAC lamp dimming — had been on my mind for quite a long time, and this year I finally jumped in and tackled the process. It started with a four-channel device called the FC-4 that I designed for EFX-TEK...

Near Space
by L. Paul Verhage
LED Based Photometer
There’s a new sensor that I’d like to share with you this month that only requires a few LEDs and a resistor. Therefore, you probably already have everything in your junk box needed to build it...

The Design Cycle
by Fred Eady
16 Bits Equals Twice The Fun
Over the years,I’ve designed most of my really serious embedded projects around eight-bit PIC microcontrollers.As for the physical sizes of the eight-bit PICs I’ve used, I’ve done eight-bit microcontroller projects with the tiny six-pin 10F PIC devices...

Getting Started With PICS
by Chuck Hellebuyck
PICBasic Pro, Excel, and The Beginner
Good things come to those who wait. This is a common saying, but the real question is how long do I have to wait? Some would say it all depends on how you define a “good thing.”

New Products
by Nuts & Volts Magazine in New Products
JK microsystems introduces their Omniflash controller, which provides the user with a rich array of I/O devices seamlessly supported by a pre-installed Linux 2.4 kernel...