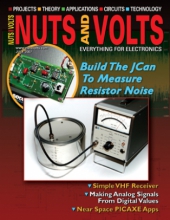 Finally ... affordable 3D! Three dimensional (3D) scanning technologies have been around for several years but for most of us these have been unavailable. The very high costs and complexities involved have attributed to this...

Examine a number of methods of creating sine waves (and others) from digital values.

Two Barometric Pressure Systems In One

planned on building a wireless station this month but, due to several requests, I decided to show you how to build a couple of different standalone barometric pressure systems...

This project was inspired by another Nuts & Volts reader — a teacher — looking for a receiver project for his class. His requirements entailed a fairly simple receiver with a minimum of adjustments...

TechKnowledgey
by Jeff Eckert
Techknowledgey 2007
IBM ([url=http://www.ibm.com]http://www.ibm.com[/url]) has announced the “first-ever manufacturing application of self-assembly used to create a vacuum — the ultimate insulator — around nanowires for next-generation microprocessors.” ...

Stamp Applications
by Jon Williams
Rev It Up
For me, one of the most exciting aspects of working with the SX and programming it in SX/B is the ability to create accessory devices like last month’s animatronics controller...

Near Space
by L. Paul Verhage
PICAXE applications - Part 1
At one Boise Robotics Group (BoRG) meeting last year, Barry Nye, the Technology Guy at Hacker Middle School (Mountain Home, ID) and a founder of the BoRG, told me about a new line of microcontrollers that he had recently discovered...

In The Spotlight
by Marvin Mallon
An Interview with Sharon Shepard
This month’s spotlight is on Integrated Ideas and Technologies, Inc., a privately owned fabrication firm located in Coeur d’Alene, ID. The company operates two divisions internally with a staff of 22...

Personal Robotics
by Pete Smith
Combat Robots Return to North Carolina
A few years ago, North Carolina was one of the best places to live if you were interested in combat robotics. There were two major events held each year in the state...

Getting Started With PICS
by Chuck Hellebuyck
Hot Wheels Drag Race Finish Gate
On a recent trip to the local Kmart, I saw that Mattel had released a series of classic Hot Wheels sets similar to the ones you could buy when I was a kid...

How Do You Measure Competency?
by Bryan Bergeron
Do you consider yourself a competent electronics enthusiast?