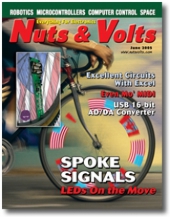 When Nuts & Volts asked me to cover Convergence 2004, I said no problem. I usually go there every couple years and I was due to visit again. The show had some very interesting items for the Nuts & Volts reader. First though, let me tell you what Convergence is, in case you aren’t familiar with it.

Have you ever thought of a project where you needed to position an object with great precision? Maybe you wanted to build a precision milling machine or maybe a computer plotter. My introduction to precision positioning came about from a need to wind wire coils for solenoids. Coils are used for all kinds of electrical applications – from solenoids for electromechanical actuators to coils for electric motors.

Build a USB soundcard for your Desk PC or Laptop

You will be the center of attention when you ride by on your bicycle with this cool gizmo attached to your wheels. With the use of LEDs (Light Emitting Diodes), you can make patriotic images appear to be suspended in air as your wheels spin. This construction article describes “Spoke Signals” — a series of three LED virtual image generators for your bicycle.

Personal Robotics
by Mike Keesling
Bouncing Ideas Around for a Ball Bouncing Robot
The bug has been stirring in me for quite some time. I rued over doing a giant, 22’ long robotic centipede with 36 cheap electric drills. I considered doing a seven-joint-per-leg biped, and even a 10-legged scorpion. After several days of incessant moaning at work, my co-workers suggested that I build a one-legged hopper. Now, I have done some stupid things on a dare, and although I am mad, I most certainly am not crazy.

In The Trenches
by Gerard Fonte
Tips and Techniques Revisited
Engineers are often called upon to fabricate and repair equipment themselves. Unfortunately, for many engineers, their only exposure to hands-on work was from laboratory exercises in school. This month, we’ll look at some practical approaches to common problems. For experienced hobbyists, some of these may seem obvious.

Stamp Applications
by Jon Williams
Even Mo’Midi
About two years ago, I did a couple columns on MIDI (Musical Instrument Digital Interface) using a BASIC Stamp 2 microcontroller. Our experiments at the time were limited to sending MIDI data. These articles generated a lot of interest, and the most pressing question has been, “How can I receive and process MIDI data in my project?” The fact is that it’s very tough to do that effectively with a BASIC Stamp, but now that we’re equipped with SX/B, we’re ready to rock … and roll …

The Design Cycle
by Peter Best
Creating a Monster - Micro64 Style
Back when dinosaurs roamed the Earth (when I programmed my first microcontroller), an embedded programmer working with microcontrollers had very little in the way of program Flash and on-chip SRAM. In fact, the first microcontroller I learned to program only contained 512 bytes of EPROM (that’s right ... EPROM not Flash) and 24 bytes (count them again, 24 whole bytes) of SRAM.