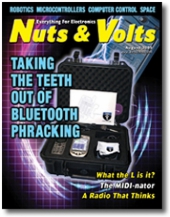 Taking The Teeth Out Of Bluetooth Phracking

The magnetic wire recorder, ancestor to the tape recorder, had undergone great development during World War II. By the late 1940s, wire recorders were available in consumer equipment.


Taking the Teeth Out of Bluetooth Phracking

What The L Is It?

I have been a fan of MIDI (Musical Instrument Digital Interface) since the 1980s. The idea of controlling musical instruments from a computer has always seemed cool to me.

Last month, we assembled and tested our Ultimate Utility Meter (UUM). This month, I will show you how to operate the UUM.

Stamp Applications
by Jon Williams
A BS2px ADC Trick and a BSI Controller Treat
The BS2px is the latest edition to the BASIC Stamp microcontroller line. In addition to increased speed, the BS2px adds two new commands that give the programmer access to features available in the core SX microcontroller: CONFIGPIN and COMPARE.

Open Communication
by Louis E. Frenzel
A Radio That Thinks
An Introductory Look at Software-Defined/Cognitive Radio

The Design Cycle
by Peter Best
Focus On The Flash (Atmel AT49LV1025)
Integrating large FLASH and SRAM into microcontroller designs has become a must-know technique with the advent of microcontroller-based LAN devices. Sometimes an EEPROM just isn’t enough to hold all of those web pages you want to serve from your little PIC-based or AVR-based web server. If you’re collecting data, a large FLASH part is nice in that you can store away those accumulated readings and retrieve them intact, even if the batteries go bye-bye on your microcontroller-based data collection

Personal Robotics
by Mike Keesling
Hey, Mikey Likes It!
A Review on the Hexcrawler HDATS

In The Trenches
by Gerard Fonte
Recognizing and Encouraging Good Ideas
Engineers and engineering managers are always at the leading edge of technology. New ideas are potentially very valuable.