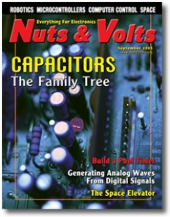 If the home computer can be said to have had a Golden Age, it ran from the late 1970s to the early 1980s. Back then, there were dozens, if not hundreds, of computers from which to choose. Magazines compared brand-to-brand, operating system-to-operating system.

There are many different choices when it comes to capacitor types. Find out why and how to tell which one is right for your project.

Getting good analog signals out of digital ones can be done fairly easily with a minimum of parts. It does take some programming effort, and high-frequency audio signals require most of the uC clock cycles. However, if you experiment with these two general approaches you will probably find some interesting applications for your projects.

About a year ago, when I created a floating pool light and shared it with readers, I received a number of positive responses. Around the same time, I also developed a pool timer. I’ve since refined the project and developed a new prototype, which I’ve outlined here.


Build An RC Car On The Cheap

Add A Digital Recorder To An FM Radio

Micro Memories
by Edward B. Driscoll, Jr.
The Computer That Took Man To The Moon
Even though the last Saturn V flew decades ago, the Apollo moon landings remain one of mankind’s greatest engineering efforts.

Let’s Get Technical
by James Antonakos
Making The Illusion Real
In my last article, I challenged myself to duplicate the interesting patterns created by five small LEDs mounted on a spinning disk (Figure 1). My three-year-old daughter does not know that I have taken her $10 toy apart to assist in my investigation, so I may end up in a miniature doghouse (or possibly even Clifford’s) if I cannot get the original device, or my creation, working.

In The Trenches
by Gerard Fonte
Software Development
From time to time, most engineers are required to develop software. Some have training for this and others don’t. Sometimes the training is inappropriate for the task at hand. This month, we’ll look at approaches and considerations that are important in developing good software.

Near Space
by L. Paul Verhage
The Space Elevator
Today, payloads are hurled into space on (still) expensive rockets. To get the best performance, these rockets push their design to the limit. And, as a result, considerable time and many people are required to build and prepare a rocket for launch. It’s the cost of paying salaries that makes rocket launches so expensive; rocket fuel is actually cheap.