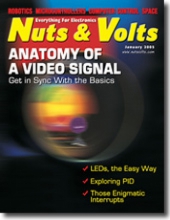 Anatomy of a Video Signal

Internet And The PCB

The Internet has transformed business in a very profound way. Similar to the impact of the Industrial Revolution, the Internet has generated tremendous opportunities for growth and expansion. It has created an entirely new way of thinking about the concept of business.

Although there are many variations and implementation techniques, video signals are just a way of transferring visual information from one point to another.

In this first of three installments, we will answer the “why” questions and also lay a foundation to better understand what a PID controller is. Part 1

As early as 1821, Michael Faraday demonstrated that continuous rotary motion could be produced by passing a DC (Direct Current) current through a wire in the presence of a magnetic field.


The Ever Shrinking µC - PART 2

If, after reading Part 1 last month, you’ve been wondering why there are two PIC10F206s on the Little Bits Development Board, here’s part of that answer: The inverter pair we just implemented can be tested by simply moving jumpers carrying the desired logic levels between the inverter inputs and watching the inverter outputs on the LEDs.

The key to maximizing LED life is limiting the current that runs through it. This is frequently done with a simple resistor whose value is calculated using Ohm's Law. This article reviews how to apply Ohm's Law to single and clustered LED circuits.

Near Space
by L. Paul Verhage
Adapting Cell Phone Battery Cells for Near Space Use
Due to the extreme cold of near space (NS), hobbyists must be careful when selecting power sources for their NS craft. On one or two occasions, I have lost track of a NS craft, apparently due to cold batteries. To reduce this risk, most of us involved in amateur NS use lithium cells, which can be rated to -60° F.

In The Trenches
by Gerard Fonte
Analog To Digital Conversion Considerations
This month, we'll examine the error sources and problems that occur when the necessary attention to detail is ignored.

Let’s Get Technical
by James Antonakos
Hop, Skip, and Jump
Everyone seems to be jumping onto the wireless networking bandwagon. With more and more devices going wireless, the airwaves are constantly filled with numerous digital “conversations.” For ordinary, law abiding wireless users, the congestion is handled using a wireless protocol that allows for reliable communication in a noisy, competitive environment.

Stamp Applications
by Jon Williams
Timing Is Everything
It wasn’t very long after the BASIC Stamp and other BASIC language microcontrollers appeared that advanced users started asking about using interrupts. Well, neither the Basic Stamp family nor — to my knowledge — any of the micros in the same class supports true interrupts...