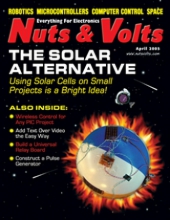 The Solar Alternative - Using solar cells on smaller projects is a bright idea.

So, you want to fill your hobby electronics drawers with parts galore and don’t have the money to start? Here are a few simple rules to follow that will help you're scrounging efforts stay on the right track.

A solar cell (sometimes called a photovoltaic cell) is basically a large diode. Just as a photodiode (or even, for that matter, a regular glass-walled diode like a 1N914) will produce a voltage when exposed to light, so will a solar cell.

Measuring the Speed of Light

Most people know that light travels at around 186,000 miles per second in a vacuum, but that speed is really incomprehensible. This project will allow you to measure the speed of light simply and inexpensively, as the basic parts cost well under $20.00.

This universal relay board will allow you to drive a 12V DPDT relay using heat, cold, light, dark, sound, logic-level voltages, and just about any varying resistive output sensor you can think of.

The Design Cycle
by Peter Best
A PIC-based Wi-Fi Development Platform
Does that new laptop of yours have built-in wireless Ethernet local area network (LAN) capability? How about that new portable digital assistant (PDA) you just purchased? Does it have wireless Ethernet LAN capability, too? It seems that everything these days is wireless — except the things that you really want to be wireless.

Personal Robotics
by Mike Keesling
LEGO My ...
LEGO® has become something of a household word. If you grew up in the 50s or later, you probably owned a set or hoped to, in any case. It is not only a part of our culture, but also has international appeal. LEGO started out making small wooden toys in the 1930s. They slowly grew, adding plastics to their repertoire of materials.

In The Trenches
by Gerard Fonte
Project Engineering Taks
There are a series of steps that are usually followed in most engineering development cycles. It’s important to know what these are and what they entail, and this is especially true for the new engineer or new engineering business venture (independent consulting). This month, we’ll go over these basic steps and explain what they consist of and why they are important.

Stamp Applications
by Jon Williams
You Can’t Touch That : Non-Contact Access Control
Okay, what’s going on with the card? You’ve probably seen them — they’re everywhere. The cards in question contain technology called radio frequency identification (RFID). Even if you haven’t heard of RFID, you may have been unknowingly exposed to it. RFID tags can be as small and nearly as thin as a postage stamp and are often used to track package movement in retail stores (big companies like Wal-Mart, Target, and others are adopting the technology). Drug companies are even putting RFID tags i

Open Communication
by Louis E. Frenzel
The Magic of Antennas
If you really want to know what makes any wireless application work, it's the antenna. Here, we'll summarize some of the most common types and make you aware of what an antenna really is and how it works.