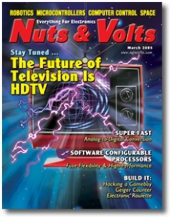 The Future of Television is HDTV

Getting Started With PLCs - Part 2

Last month, Part 1 provided a basic introduction to PLC programming, and this month, additional information and PLC programming features will be discussed, including a more complicated circuit — the roll-up door opener controller. The first article also left us with a start/stop circuit that did not have a hold-in feature; you had to hold the start button in to keep the motor running, which is inconvenient.


HDTV: Past, Present, and Future

Analog TV’s days are numbered. In a few years, we will likely see an end of analog broadcasts in the major cities. Yet, the average consumer knows very little about HDTV and even HDTV salespeople don’t fully understand the history and technology behind the system. Here, I will provide a brief summery of the history, the basic technology, and potential future for HDTV.

This radio exchange is not that far off in the future! On June 21st, I had the opportunity to attend the first public launch of Scaled Composites’ space flying aircraft, SpaceShip One. On October 4, 2004, they won the Ansari XPrize by successfully launching into space from the Mojave, CA Spaceport twice in the span of five days.

A Geiger counter produces an audible click and blinks an LED each time it detects a radioactive particle. Typically, the counter clicks 10-20 times a minute due to normal background radiation (which is less than 80 millirem/hr) and — although the device is sensitive enough to measure background radiation — it is not suitable for measuring radon gas.

For this article, I will discuss an electronics project that uses an old Gameboy Color as a microcontroller to drive and control the side-scrolling LED stock ticker shown in Figures 1 and 2. The LED stock ticker consists of 105 x 7 dot matrix LEDs that are cascaded into a 50 x 7 LED screen. The whole project is wire-wrapped and running at a frequency much less than eight MHz.


Start Your Own Casino

Micro Memories
by Edward B. Driscoll, Jr.
2001 - Hal’s Odyssey
Perhaps the most influential computer was one that never actually existed: HAL 9000, the star of Stanley Kubrick’s magnum sci-fi opus, 2001: A Space Odyssey.

Stamp Applications
by Jon Williams
Ping… I See You
Let’s start from the beginning. Why should we even bother with conditional compilation? Well, it depends, really. If we’re going to write a program that will never (yeah, right ...) need to run on another BS2 family module, then we don’t need to bother. What if, however, we want to share our cool program with a friend who uses a different module?

In The Trenches
by Gerard Fonte
Rules and Rule-Bound Behavior
Rules are part of everyday life and human nature. They are necessary and useful; however, rules can be confining, and this is especially true when rules are applied without any consideration for context. There are all types of rules: social, personal, business, technical, and biological. The important common aspect of these rules is that you don’t have to understand them to obey or enforce them.

Near Space
by L. Paul Verhage
Updates on Modifying Cameras for Digital Control
I’ve been experimenting with cameras since my last column, and this month, I have some updates on three camera topics: modifying other cameras, adjusting the focus on fixed focused cameras, and IR imaging.