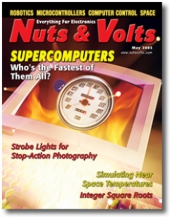 Supercomputers - Who’s the fastest of them all?

SUPERCOMPUTING: In The New Millennium

Last month, I described the hardware necessary to build a unit that will allow one to do video text overlay with a PIC microprocessor. We will conclude this month with the software programming of the microprocessor, testing the system, and experimenting with the techniques of subliminal messaging.

In The Blink of an Eye

In an otherwise dark room, a short flash of light is used to capture the stop-action photos you see on the pages of this article. The short duration of the flash is what provides the stop-action, and a strobe tube can produce a flash duration of about 1/1,000 of a second. This is fast enough to capture still images of exploding objects and events of similar velocity.

If you want a clock that really attracts attention, this unusual project will be a big hit. It’s easy for any self-respecting computer geek to figure out how to read this clock in a few minutes, but others will simply be baffled by what seems to be a random pattern of lights.

In the March 2005 issue, we completed a fully functional basic Geiger counter. This month, we have a few cool enhancements to add on.

Let’s Get Technical
by James Antonakos
The Root of the Problem : Performing Integer Square Roots
When I first began playing with microprocessors, the initial eight-bit CPUs had limited eight- and 16-bit addition and subtraction capabilities, but could not multiply or divide. I always had to write an eight-bit multiply subroutine when I needed one.

Micro Memories
by Edward B. Driscoll, Jr.
The IBM PC and Its Continuing Repercussions
In the 1999 made-for-cable movie, “Pirates of Silicon Valley,” the filmmakers chose to illustrate how significant a 1980 meeting between Bill Gates and IBM was by having John Di Maggio, the actor playing Steve Ballmer (Gates’ longtime lieutenant), walk out of the scene, up to the camera, and tell the viewers that this — this! — was the most important moment in computer history.

Stamp Applications
by Jon Williams
The Parallax PBD - Freedom to Create
When I first started working for Parallax my boss, Ken, handed me a big development board and said, “See what you can do with this.” The board was, of course, the original NX-1000, and Ken and I went on to create StampWorks around it. Even after StampWorks, the NX-1000 never left my desk; it was the perfect “playground” for my experiments, and many of my projects forthis column originated on the NX-1000 development board.

Near Space
by L. Paul Verhage
The Thermal Test Chamber
Got a new item for near space that you want to test? Simple tests on the ground can ensure that your design functions well in near space. This way, failures identified during a test can be corrected before a near-space flight (where a failure can lead to the loss of a near spacecraft).

In The Trenches
by Gerard Fonte
Teaching and Training
Because engineers create new things and new ideas, other people have to be instructed in how these new things and ideas work. Naturally, it falls on the engineer to do the teaching and training. Understanding what is necessary and expected of you when you talk to a group of people can be helpful.