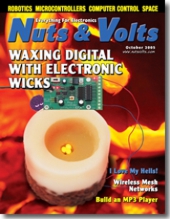 If you program PICs in assembly language, it is a good bet you use MPASM — Microchip’s free assembler/editor/simulator. It’s also a good bit that you write one big file that maps out the program in the PIC’s memory.


I Love My Heils!

My love affair with Heils has raged on for more than a quarter century! When I stepped into that audio store in 1973 and heard the Heil Air Motion Transformer (AMT) loudspeaker for the first time, I knew that I was hearing music as it was meant to be heard — crystal clear and as smooth as glass! Fortunately, the AMT is still available today, continuing to bring beautiful sound into the world.

In the first two articles of this series, I will describe the organization of SCAM and show how it manipulates different data types and queries. The third article will describe some associative logic and mathematical algorithms, and will elaborate on performance issues and calculations relevant to SCAM. The fourth article will be dedicated to the realization of SCAM building blocks using ispLEVER tools. The final article will cover assembling those building blocks into a FPGA device using ABEL h

Even though there are fuses in the car, resetting a circuit breaker is a lot easier than buying and replacing a “one-time-use” fuse. This circuit is simple, uses a handful of readily available parts, is completely electronic, and has a very fast cut off time. A picture of the completed circuit breaker and remotely located FET/Rsense is shown in Figures 1, 2, and 3. Also shown is the completed project PC board. This application is used in a high-amp, low voltage DC supply.

Ever have the desire to build your own embedded MP3 player? Maybe you just like to listen to music and want to do it with a gizmo you built yourself, or maybe you don’t like the user interface on your commercial MP3 player and are sure you could design a better one. Or maybe you want the ultimate recorded voice for your robot project, or how about a fancy doorbell that plays an entire song? Or record an assortment of different dogs barking and connect it to your burglar alarm?

The use of radio frequency (RF) control for switching devices is becoming increasingly popular. The project described here uses RF control to actuate a zany, whimsical doorbell. The electronics involved in this circuit can be used to control more practical projects, such as a garage door opener, appliance turn-on, wireless home signaling (paging), and remote sensing.

Stamp Applications
by Jon Williams
Tricks And Treats With LEDs
October — it’s finally here! It’s time to build (okay, finish building) our Halloween displays — whether they’re used in yard decorations or in a full-blown, professional haunt. Nothing adds spooky ambience like a candle in a darkened room, but candles can be dangerous — unless you build them yourself and substitute the coolness of LEDs for the heat of an open flame.

Open Communication
by Louis E. Frenzel
Wireless Mesh Networks
Today, what computer is not networked? If it is not connected to the Internet via a dial-up, broadband cable, or DSL modem, it is connected to a local area network (LAN), which, in turn, is connected to one or more other networks. And, LANs are not restricted to offices — they are also in many homes.

Personal Robotics
by Mike Keesling
The Ball Bot
To recap, a simple description of the Ball Bot would be “a two-axis inverted pendulum.” The operative word here is simple. In its implementation, it is three belt-reduced, encoded motors driving some Omniwheels sitting on top of abasketball — with a bunch of inertial sensors and a DSP thrown in for good measure.

In The Trenches
by Gerard Fonte
Hiring And Firing
As engineering departments grow, engineers are often promoted to management positions, or at least assume management responsibilities. When those responsibilities include hiring engineers and technicians, new managers can be challenged by the difficult assignment. Even more challenging are the times when workers must be eliminated from the department because of financial concerns, or poor performance or behavior. This month, we’ll look at the factors involved in hiring and firing.