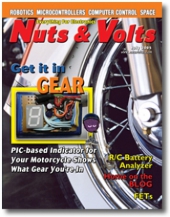 Get It In Gear

Your New Home on the Internet Awaits

A Necessary Device for the Modern IC

A while back, a friend of mine with a Suzuki Katana motorcycle sent me some plans he pulled off the Internet for circuits that would tell him what gear his motorcycle was in while he zipped down the highway. Since I’d helped him with some other electrical and electronic projects for his bike, he figured I could build one of these for him. I looked over the schematics he had found but wasn’t too impressed — most were for “strip gauges” which lit a different LED for each gear...

This battery analyzer project is designed to test the “health” of battery packs used in radio-controlled vehicles to drive their motors. An effective way to test the health of a battery pack is to place a normal operating load on a fully charged pack, and then record the voltage levels while it is discharging through a test load. The information produced from the recorded data will create a graphical “discharge curve” that can be used to examine its performance level and determine the health of

In December 2001, I wrote an article in Nuts & Volts called the “Digital Utility Meter.” It was a great success and many readers built the meter. I think the reason it turned out so well was the fact that I used the meter to aid in many of my own projects.

Let’s Get Technical
by James Antonakos
Optical Illusion and the Light Emitting Diode
My three-year-old daughter recently became fascinated by a small hand-held electronic toy that spins a disk round and round very quickly (see Figure 1). Light emitting diodes (LEDs)mounted on the edge of the disk turn on and off in all sorts of interesting patterns. Those familiar with my background in electronics will recognize that I cannot stand idly by, watching this $10.00 toy flash its lights at me without beginning to think about how to do it myself.

Stamp Applications
by Jon Williams
Getting Hot, Hot, Hot
Like the BASIC Stamp, the Maxim/Dallas DS1620 has been around a long time and has been a big part of my temperature-based projects. Yet in all this time, I had never explored the high-resolution use of the DS1620. “High resolution?” you ask. Yeah. With just a little bit of extra work, we can get temperature resolution to 0.05 degrees Celsius (0.09 degrees Fahrenheit) from our old stand-by. How is this possible?

In The Trenches
by Gerard Fonte
Managing Engineers
This article is going to be somewhat different from the past ones. Instead of addressing a topic that is directly applicable to engineers, I will look an important indirect topic.

Near Space
by L. Paul Verhage
BalloonSats
The BalloonSat program is an effort by the Space Grants of several states to capture the interest and imagination of college — and in some cases — high school students through a space flight experience. BalloonSats are miniature near spacecraft. They are limited in weight and carry only a simple data logger, sensors, and small camera. Students can quickly construct and test BalloonSats. BalloonSats carry no tracking equipment, therefore, they’re carried as cargo on an amateur near spacecraft.