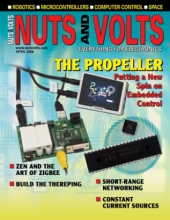 This short article won’t accomplish the Herculean feat of bringing you up to speed on everything, but it is an attempt to cut through the marketing trivia, summarize user feedback from the web, and simply let you know what to buy. I’ll also include recommendations for upgrades to your computer to handle video editing. As you read, be sure to refer often to the sidebar on video formats...

This two-part, very applications- oriented article first defines a constant current source, and then shows what it can do for you.

When prototyping with single chip computers like the PIC, SX, etc., it is often necessary to determine if multiple outputs are correct. So, I created an octal logic probe that can be plugged directly into a prototyping socket to view eight adjacent pins at once. Several can be used to monitor the complete chip...

The Pocket Marquee Badge is an easy-to-build construction project for anyone looking for an attention-getter to take to conventions, meetings, or parties.


The Creation of the Thereping

The “Thereping” is a digital musical instrument that plays sounds based on a combination of the position of your hand and some pushbutton switches.

Stamp Applications
by Jon Williams
Putting A Whole New Sping On Embedded Control
When I first saw the ads in Nuts & Volts for the BASIC Stamp 1 (way back in 1993), I didn’t believe it. I maintained an it’s-just-too-good-to-be-true attitude, and actually put off buying my first BS1 for about six months. Well, for some, that’s about to happen again. After a long, and sometimes arduous development cycle, Parallax has produced its first piece of custom silicon — the Propeller chip. No, it’s not a microcontroller, it’s a heck of a lot more — it’s a multi-controller...

Getting Started With PICS
by Chuck Hellebuyck
Going Beyond 31 Commands
The feedback to my articles tells me this series on programming Microchip PICs is a success. Based on loads of email, I’ve helped many readers get back in the electronics game and comfortable programming microcontrollers. That is a reward in itself and is enough for me because many years ago, I was there, too. That success, though, also invites its detractors...

Personal Robotics
by Phil Davis
Zen And The Art Of Zigbee - Part 2
I’ve chosen Zigbee as my first topic for Personal Robotics because ... well, because it’s cool. In this issue of Nuts & Volts, we’ll begin a general discussion on what Zigbee is, its basic functionality, where to get it, and the associated software. Parts 2 and 3 will be in subsequent issues. In Part 2, we will follow a project in which a simple peer-to-peer Zigbee connection will be used to control a robot, and Part 3 will attempt to show a more complex mesh topology...

The Design Cycle
by Peter Best
Arm Yourself With Philips Microcontrollers
This time around, the object of our affection is the Philips LPC2100 family of 32-bit ARM7 micro-controllers. In this text, we will focus specifically on building some LPC2106 and LPC2136 ARM7 hardware from scratch. Once the hardware is assembled, I’ll walk you through some functionality testing and introduce you to some of the hardware and software tools you’ll need to program and debug the ARM7 microcontrollers...