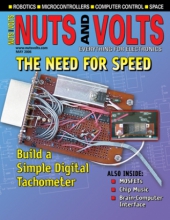 The Need For Speed

Popular culture was recently taken for a wild ride in the three Matrix movies, where Neo and his band of survivors plugged their brains into the computer-controlled Matrix to battle evil and save the world. In Minority Report, three ‘PreCogs’ have their brains wired up to record crimes that occur in the future. Science fiction has long been fascinated with the idea of tapping into the human brain...

As a designer of chemical sensors that monitor harmful gases, I have always been intrigued by nature’s ability to detect chemicals at one-molecule-per-trillion concentration levels. Current chemical and biological detection technology still pales in comparison to the reliable sensory system of a properly trained biological organism in terms of sensitivity and selectivity to the molecule of interest...

I bought a used Nissan pickup truck a few years back that had absolutely no bells or whistles on it when it rolled off the assembly line. I wanted to make some “improvements” to the engine, and I wanted a tachometer to help assess the results (for better or worse). The add-on tachometers available in auto parts stores didn’t appeal to me, mostly because I knew I could make one myself if I put my mind to it. What I really wanted was a digital tachometer...

Use a microcontroller to produce the frequencies needed to play specific musical notes and generate their tones.

I needed a capacitance meter. However, I couldn’t justify the high cost. So, I decided to build my own.

Getting Started With PICS
by Chuck Hellebuyck
Using The MicroChip PIC Timers
For this article, I’ll explain timers and then use the Timer 1 peripheral to form an accurate one-second time base. This could be considered an advanced project so don’t be too hard on yourself if it takes a while to completely understand it...

Stamp Applications
by Jon Williams
The Object Of The Machine
So, is your head spinning after last month’s introduction to the Propeller chip? Don’t worry, it happens to all of us, and I promise that after a bit of time things will begin to click, a big smile will cross your face, and wonderful things you thought never possible will start happening. Last month we talked about the Spin programming language being object oriented, but didn’t really take advantage of it. Let’s change that, shall we?

Personal Robotics
by Phil Davis
Zen And The Art Of Zigbee - Part 2
Okay, last month we briefly discussed some of the architecture and network topology possibilities of Zigbee along with many of its capabilities. As promised, this month, I want to demonstrate a simple project in which a peer-to-peer Zigbee connection will be used to control a robot using simple commands and to receive data sent back from the robot...

Near Space
by L. Paul Verhage
The Near Space Geiger Counter Telescope - Part 1
Many of my near space missions have measured the cosmic ray flux in near space with onboard Geiger counters. Combining Geiger counter data with GPS altitude has allowed me to generate charts showing the cosmic ray flux as a function of altitude. Experiments like this allowed the Austrian physicist Victor Hess to prove the existence of cosmic rays in 1911-1913...