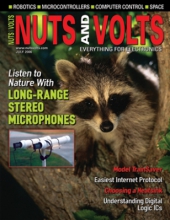 The TrainSaver is a device that reduces wear and tear on model train locomotives used in commercial environments. The TrainSaver maximizes the life of the engine by only running the train on timed intervals, and only when people are present to view the train's performance. This reduces the cost of ownership of the train system by increasing the life of the engine. The device also adds synchronized sound effects to enhance the train's visibility to the audience...

This article presents some of the fundamental concepts of radar and shows how EW (Electronic Warfare) develops from that.

Let's face it — if this article was titled, "Thermal Analysis," you might put off reading it! But choosing a heatsink? Everybody understands what that's all about, right? To make that choice, you have to do a little thermal analysis (gotcha!), but if you can do Ohm's Law, you already know how!

Friends, birders, electronics enthusiasts, lend me your ears so that you may listen to faraway sounds using these easily built long-range stereo microphones.

A while back, I was researching sensors for a project I was working on when I came across a little device called a CMUcam. The CMUcam is a low-cost vision sensor developed by Carnegie Mellon University ([url=http://www.cmu.edu]http://www.cmu.edu[/url]). The CMUcam has both an RS232 level interface, as well as a TTL level serial interface so you can connect it to your favorite microcontroller or directly to a PC...

Getting Started With PICS
by Chuck Hellebuyck
Developing With A PIC Bootloader
If you’ve been a regular reader of this column and have started to actually program PICs, you are probably tired of moving the PIC from programmer to project and back again every time you make a change. It not only damages pins, but can sometimes cause confusion if the PIC is put in the board backwards or even shifted by one pin. This is why I like to develop with a bootloader and it’s one of the most difficult items to explain to a beginner...

Personal Robotics
by Phil Davis
Design A Mini Sumo - Part 1
LAST SPRING, OUR ROBOTICS CLUB scheduled a Mini Sumo competition for the summer of 2005. Of coarse, no one had a Mini Sumo robot, so a mad frenzy of ideas, concepts, and parts ensued.

Stamp Applications
by Jon Williams
A Tale Of Two Props
After spending a few months with Parallax's newest controller - the Propeller chip - why not step back in time a bit (13 years!) and work with the oldest, the venerable BS1 - the controller that started it all for Parallax.

Near Space
by L. Paul Verhage
The Near Space Geiger Counter Telescope - Part 2
his month’s column wraps up the Geiger Counter Telescope (GCT) and discusses a transistor experiment I performed. This article covers the GCT’s field-of-view, a ground test of the GCT, and flight software that operates the GCT. There is a small note to clear up the RM-60 instructions in chapter eight of my near space book at the Parallax website and a transistor experiment which includes a competition for readers.

The Design Cycle
by Peter Best
The Easiest Internet Protocol Of All
RS-232-based serial ports are great data donkeys until you need to move data on an Ethernet LAN or throw it out onto the Internet. Most of the networking email questions I field from Nuts & Volts’ readers concern moving their data transfers away from traditional RS-232 cables and on to an Ethernet LAN or the Internet....