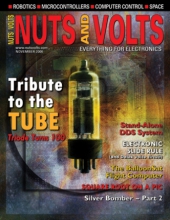 Tribute To The TUBE

Square Root On A PIC

Square roots have been in use for thousands of years in construction and astronomy. Today, they are also used for computing RMS values, FFTs, and other types of digital filtering, navigation, and more. With more and more smarts being put into smaller and smaller devices, there is greater need to run a square root function on a small, low-power MCU. Typical methods for computing square roots are slow and difficult to implement on a small MCU. They require multiply and divide functions...


The Triode is 100 Years Old This Year

This year (2006) marks the 100th anniversary of Lee de Forest's Audion or first vacuum tube triode. This vast improvement upon John Ambrose Fleming's valve changed the world like few other events since.


Making Something From Nothing

Radio and vacuum tubes grew up together from their genesis a century ago, but their history was not a clean, step-by-step process. Theory and experiment took turns leapfrogging each other, mixing sudden discoveries and steady refinements. Their story begins in the Age of Steam...


David Sarnoff And The Birth Of The AM Radio

Sarnoff was one of the pioneers of the era of mass communications.

The engineering challenges of the hot cathode vacuum tube — an invention dated 1906 — are the same today as they were then. The inventing of new, more compact and efficient vacuum-tube designs proliferated madly up until the 1950s, but the art has been frozen ever since.


Vacuum Tubes for the 21st Century

Hard as it may be to believe, there are still some applications today where a vacuum tube is a better choice than a transistor, and even a few applications where transistors simply aren’t an option and a tube is the only choice available.

For anyone interested in electronics, its history, and development, a trip to the Antique Wireless Association Museum is a must. Featured are some of the most unusual and rare exhibits of wireless, telegraph, radio, and television ever assembled.

This article chronicles the restoration of a 1941 Philco model PT-44 vacuum tube radio shown in Photo 1. As I worked on this radio, I often found myself wondering who owned it. What did they listen to? Did this radio deliver the original radio broadcast of President Roosevelt’s address to Congress, “Yesterday, 7 December 1941 — a date which will live in infamy ...”

In 10 years, your computer will be in the landfill, but your slide rule will be operating just as fast as it did in 1700. As an engineer from the 1970s, I have a nostalgic place in my heart for those pre-electronic computer mechanical calculators...

Direct Digital Synthesis (DDS) is one of the more prevalent methods used to generate a frequency agile signal today...

Getting Started With PICS
by Chuck Hellebuyck
PIC Hardware Interface
Programming Microchip’s PICs is a lot of fun, especially if you have a nice development board with all the connections pre-wired for you. My BasicBoard, built around the 40 pin Atom chip (16F877A with Atom bootloader installed), was designed just for that purpose. A beginner could get a lot of programming in before they ever have to build custom circuitry around their PIC micro-controller. What I’ve found from reader feedback is a lot of people are looking for a little guidance...

Personal Robotics
by Phil Davis, Ken Tait
The Saga Of The Silver Bomber - Part 2
In Part 1 of this article (two months ago), we explored how finding some surplus Silver Bombers led to the development of a controller for the motors they contained. We explained what would be required to run various motors of this size and came up with a practical design...

The Design Cycle
by Peter Best
“Discover"ing DHCP Messages
I’ll bet that many of you took my advice to heart and read through the DHCP RFC documents. If you did, you now know that there are mountains of rules and recommended procedures for implementing DHCP. The good news is that I’ve sifted through all of that stuff and gleaned only the essential DHCP stuff we’ll need to allow a microcontroller to play in DHCP land. The information that I milked out of the DHCP RFC documents will be used to form the basis of our DHCP source code, which we will...

Stamp Applications
by Jon Williams
Hacking The Parallax GPS Module
In September, we talked about exciting new updates in the SX/B compiler and now we’re going to put a few of them to use with a cool new GPS product from Parallax. This isn’t just another GPS module. It was specifically designed to be hacker-friendly. How? Well, it uses an SX20 and the firmware was written in SX/B — and you can download this code from Parallax. Better still, is the addition of several nondescript pads on the PDB...